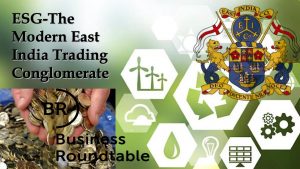 ESG is echoing in the chambers of concerned Citizens, bloggers, pundits and tinfoil hatters. Yet, ESG has been around for decades. It is the leopard that can change its spots. Let me tease you with this so that you will listen to the program:

‘For the last two decades, scholars, judges, and corporations have embraced the idea that corporations should maximize benefit for shareholders. But on a lazy summer day in August of 2019, that changed. The CEOs of nearly 200 major U.S. companies released a statement embracing stakeholder theory—the idea that corporations should look after the needs of not only shareholders, but also those of employees, suppliers, community members, and others. Many applauded this as a progressive step: a way for corporations to take control back from the outsized, greedy influence of profit-driven shareholders. This Essay takes a different view, arguing that shareholders have long been advocates of the kind of progressive values that the public desires. Instead of being a step forward, stakeholder theory is another way to entrench management.’ – Shareholder-Driven Stakeholderism by Cathy Hwang and Yaron Nili

Actually, you are the ones causing ESG to be implemented via your investments in 401k’s, union pension plans and allowing the social justice warriors to lead in the corporate board rooms.

I know, You didn’t know you are culpable. You were and are busy at living in a quasi-liberty that has been captivated in ‘the Matrix’ for more than 100 years. Well, its time to get ‘Unplugged.’

Start back in 1913 with the key Amendment of that time. Think about the effects of the 16th Amendment for today and consider the mechanisms established in the Constitution for funding the Limited role of government. Now think about bureaucratic rule and the ruling class with corporations leading the policy definition.

Consider California Assembly Bill 979 which requires California-based corporate boards to have a certain makeup. And remember, that the Business Roundtable has been influencing and/or directing local, state and federal policy since 1978.

Yupper, based on what a company can deliver to government via contracts or legislative incentive – government will deliver incentives to government.. Hmmm, you are getting the picture – right? More to be said about this on the program.

Lastly, consider that if Bloomberg thinks ESG is the end of Friedman’s economic model well…. ESG Drives a Stake Through Friedman’s Legacy

ESG – What’s Next for America?

It is going to be an extremely hard challenge for this present day America. Every single one of us is tied into ‘the Matrix’ one way or another. It is not that easy to pull the plug like the Citizens of the founding era did with the ‘Non-importation Agreements.’ We all will have to make serious choices. Not to just do as President Trump keeps calling for – boycotts – but with sober somber and thoughtful considerations as to how you will live without. That ‘without’ may be cable, cell service choices, where you buy, what you buy… you have to look hard at that just as during the period of 1765 to 1770.

What you can do now is to engage the lower magistrates in upholding their oath of office. The fundamental is our God given sovereign rights and not the collusion between business and government.

Know your rights and fight for them. Elect those who will do the same. Deeply vet your candidates.

It take Every Citizen to understand governance. Understanding State and Federal Constitutionalism requires comprehensive knowledge of each.

Join with me in understanding our Federal Constitution. I am participating with the Institute On The Constitution (IOTC) in bringing great online and at your facilities training, You will gain a deep knowledge of our Founding truth. Follow this link to get going!

Hey Ohio – I am assisting IOTC Ohio Team in developing the course for the Ohio Constitution. Help us raise the money to bring the high quality videos and workbooks to you. Participate in that work by following this Link.

“Surely the parliament of Great Britain cannot wish for greater checks, both upon the legislative and executive of a colony, unless we are to be considered as bastards and not Sons.—A step further will reduce us to absolute subjection. If administration is resolved to continue such measure of severity, the colonies will in time consider the mother-state as utterly regardless of their welfare: Repeated acts of unkindness on one side, may by degrees abate the warmth of affection on the other, and a total alienation may succeed to that happy union, harmony and confidence, which has subsisted, and we sincerely wish may always subsist: If Great Britain, instead of treating us as their fellowsubjects, shall aim at making us their vassals and slaves, the consequence will be, that although our merchants have receded from their non-importation agreement, yet the body of the people will vigorously endeavor to become independent of the mother-country for supplies, and sooner than she may be aware of it, will manufacture for themselves. The colonists, like healthy young sons, have been chearfully building up the parent state, and how far Great Britain will be affected, if they should be rendered even barely useless to her, is an object which we conceive is at this very juncture worth the attention of a British Parliament.” – THE HOUSE OF REPRESENTATIVES OF MASSACHUSETTS TO BENJAMIN FRANKLIN.1 [Boston Gazette, July 22, 1771: a text is printed in Papers Relating to Public Events in Massachusetts, Philadelphia, 1856, 169-177.] PROVINCE OF MASSACHUSETTS-BAY NOV. 6, 1770.

Written as Satire – maybe? ”I have thought of several things that have taken place since the present administration began, which must needs have given sensible pleasure to every friend of this province, and possibly were alluded to in a late proclamation. In the first place, the friends of government have so far prevailed against the faction, as to get the non-importation plan broke thro’, which had for so long time embarrassed the Ministry in thier laudable efforts to ESTABLISH A REVENUE in the colonies. The consequence of this, it is hoped, will be, that the worthy Commissioners of the customs will be continued; and the troops which have so eminently protected the lives, and reformed the morals of the people, will be reinstated; so that the well-affected may enjoy their places and PENSIONS without molestation from the vulgar. In the next place, our Castle-William is taken out of the hands of the rude natives, and put under the government of regular forces; this was an admirable manoeuvre, which has occasioned the highest joy in the friends of government, (thank his Honor for it) and in proportion damp’d the spirits of the faction. And then, such a grand appearance of tall ships of war in our capital harbour, which were certainly designed to show us the marks of the greatest respect, (for what other end could the wise ministry have had in view) and may serve to make up for the loss of troops, if we should unfortunately not be favoured with more! —There is also the advantage which his Honor the Lt. Governor must reap from some late instructions, which, no doubt, “are founded in wise reasons,” whereby the great defects in our Charter, which the friends of government have been long complaining of, may be supply’d. —I might mention also, a late remarkable deliverance from death and danger, (blessed a-m——-n!) for it would have been a great discouragement to the efforts of government. —But no more— these may be thought to be matters of great thankfulness, and may suitably employ our minds at the approaching solemnity.” – ARTICLE SIGNED “A TORY.” [Boston Gazette, November 26, 1770.]

We appreciate your consideration in supporting what Samuel Adams Returns is about.

2. Must Read: Shareholder-Driven Stakeholderism by Cathy Hwang and Yaron Nili

3.What is ESG: Environmental, Social, and Governance (ESG) Criteria – from Investopedia

5. How the investment world is trying to promote ‘freedom’ in emerging markets – CNBC

9. Human rights due diligence as part of ‘social’ in ESG – Simons & Simons

10. What is ESG Anyway? – Business Law Professor By Ann Lipton

14. The CEOs of nearly 200 companies just said shareholder value is no longer their main objective – MSMBC

15. Must read: ESG Drives a Stake Through Friedman’s Legacy