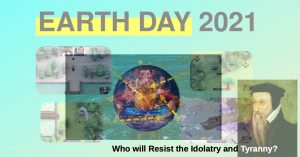 Did you really realize that it was Earth Day? I awoke to the early light coming through the blinds and was thankful that God still had something for me to do on ‘earth.’

But wait, the whole political world went into great convulsions of ecstasy that Earth Day is here to celebrate. The idols of air, trees, dirt and water merge on the shores of mindful millions that the planet must be saved. At what expense?

Where are the Christian churches in this great celebration? Isn’t all that sustains animate and inanimate life worthy of giving everything to in the necessity of its preservation?

OK… Enough! I will not belabor the destruction of humanity for idolatry in the insanity of those worshiping what they have created in their own minds. Worse, the political, corporate and intelligentsia classes are laughing as they use marketing, fear and global political power to subjugate the citizenry of these United States. I’m not wanting to dwell here. So if you want the experts visit my consulting business partner at The Tree Hugging Capitalist.

Now the question is: Who will standup and fight against these godless idolaters? Who will interpose for our Liberty, God given rights, the Christian religion and Foundational Constitutionalism

In countering Earth Day and the climate change religion, we would expect the preamble to the Magdeburg Confession to read as I have edited it bolded and underlined:

If the high authority of the president and congress does not refrain from unjustly and forcibly persecuting not only the lives of citizens of these United States but even more their rights under divine and natural law as well as the Federal Constitution and the Constitutions of the various States, and if the high authority of the president and congress does not desist from eradicating true doctrine and true worship of God by executive order and various laws, then the lower magistracy is required by God’s divine command to attempt, together with their local citizenry, to stand up to such superiors as far as possible. The current persecution which we are suffering at the hands of our superiors is primarily persecution by which they attempt to suppress the true Christian religion and the true worship of God and to reestablish the environmentalist and climate change proponents lies and abominable idolatry. Thus the Local Elected and State Elected and each and every Christian authority is obliged to protect themselves and their people against this.

Beza would look upon Earth Day in its complete picture which would include the tyranny of imposing a false religion with the homage of tax dollars going to support it and the imposition of mandates made by higher authorities that dehumanize God’s creation of man. With that, Beza would see that those who are elected as well as the bureaucracies under their control are not serving the Biblical Reformation God of our nations founding.

As John Witte, Jr. writes regarding Beza’s adopted position on civil authority and the Lesser Magistrates:

‘God ordained the “three main estates” of church, state, and family to keep order and peace in this sinful world so that the Gospel can flourish and each person can pursue his or her God-given calling, the ‘Magdeburg’ Confession argued, citing sundry biblical texts. None of these authorities may get “mixed up with one another,” or intrude on each other’s created mandate. None may abandon, betray, or exceed their God-given office. And most importantly, none may violate the sovereignty of God. All authorities thus rule conditionally. If any authorities “seek the extermination of religion and decent morals, and persecute true religion and decent living, then they dispose of their own honor, and they can no longer be considered to be authorities or parents either before God or within the conscience of their subjects. They become an ordinance of the devil instead of God, an ordinance which everyone can and ought to resist with a good conscience, each in accordance with his calling.”

Now I have discussed with you Beza’s 1574 work De jure magistratuum (On the Rights of Magistrates) – Concerning the Rights of Rulers Over Their Subjects and the Duty Of Subjects Towards Their Rulers. I gave you the Link to John Witte’s work titled ‘Rights, Resistance, and Revolution in the Western Tradition: Early Protestant Foundations’ because he best summarizes the facts that:

1. All magistrates are to recognize the God of the Bible as the highest Sovereign authority.

2. When they violate the fundamentals of the Ten Commandments these magistrates are tyrants.

3. All governing persons are subject to those who placed them in office and cannot violate their Inalienable Rights.

4. There is a Right to resist tyrants but it must be done through the Lesser Magistrates first.

‘Beza did include some of the familiar arguments from the Bible, history, and law that the Magdeburg Confession of 1550 had crafted – so much so that later library catalogers sometimes treated his ‘Rights of Rulers’ as a new edition of the Magdeburg tract. But while the Magdeburg Confession centered its legal argument on a theory of self-defense, Beza centered his legal argument on a theory of political covenant. His argument in a nutshell was a Christian social and government contract theory.’

The Bottom line for this intro to the program is that Beza, a Calvinist, gave full blessing to the Lesser Magistrates taking on those above them to interpose (Step Between) for their constituents when the higher authorities become tyrannical. This was explicit in his definitions of Constitutional governments through covenantal relationships between God, the rulers and the people.

There is no question that if you want to stop the tyranny of Earth Day then you need to learn the lessons from Beza by engaging with your locally elected. Get to know them. Support when they do what is morally and Constitutionally correct and challenge them when they violate the former.

It is up to you whether you will be required to pay homage to the idols of Earth Day or you will maintain your God given Liberties as Biblically given and covenanted in the Federal and your State Constituiton.

Have not our humble Petitions, breathing a true Spirit of rational Loyalty, and expressive of a just Sense of those Liberties the Restoration of which we implored, been followed with Grievance upon Grievance, as fast as the cruel Heart and Hand of a most execrable Paricide could invent and fabricate them? I will not at present enumerate Grievances; they are known, sufficiently known, felt and understood. Is it not enough, to have a Governor, an avowed Advocate for ministerial Measures, and a most assiduous Instrument in carrying them on – moddel’d, shaped, controul’d, and directed-totally independant of the people over whom he is commissioned to govern, and yet absolutely dependent upon the Crown – pensioned by those on whom his existence depends, and paid out of a Revenue establish’d by those who have no Authority to establish it, and extorted from the People in a Manner most Odious, insulting and oppressive. Is not this, Indignity enough to be felt by those who have any feeling? Are we still threatned with more? Is Life, Property and every Thing dear and sacred, to be now submitted to the Decisions of PENSION’D JUDGES, holding their places during the pleasure of such a Governor, and a Council perhaps overawed! To what a State of Infamy, Wretchedness and Misery shall we be reduc’d if our Judges shall be prevail’d upon to be thus degraded to Hirelings, and the Body of the People shall suffer their free Constitution to be overturn’d and ruin’d. Merciful GOD! Inspire Thy People with Wisdom and Fortitude, and direct them to gracious Ends. In this extreme Distress, when the Plan of Slavery seems nearly compleated, O save our Country from impending Ruin – Let not the iron Hand of Tyranny ravish our Laws and seize the Badge of Freedom, nor avow’d Corruption and the murderous Rage of lawless Power be ever seen on the sacred Seat of Justice!

Is it not High Time for the People of this Country explicitly to declare, whether they will be Freemen or Slaves? It is an important Question which ought to be decided. It concerns us more than any Thing in this Life. The Salvation of our Souls is interested in the Event: For wherever Tyranny is establish’d, Immorality of every Kind comes in like a Torrent. It is in the Interest of Tyrants to reduce the People to Ignorance and Vice. For they cannot live in any Country where Virtue and Knowledge prevail. The Religion and public Liberty of a People are intimately connected; their Interests are interwoven, they cannot subsist separately; and therefore they rise and fall together. For this Reason, it is always observable, that those who are combin’d to destroy the People’s Liberties, practice every Art to poison their Morals. How greatly then does it concern us, at all Events, to put a Stop to the Progress of Tyranny. It is advanced already by far too many Strides. We are at this moment upon a precipice. The next step may be fatal to us. Let us then act like wise Men; calmly took around us and consider what is best to be done. Let us converse together upon this most interesting Subject and open our minds freely to each other. Let it be the topic of conversation in every social Club. Let every Town assemble. Let Associations & Combinations be everywhere set up to consult and recover our just Rights. ” The Country claims our active Aid. That let us roam; & where we find a Spark Of public Virtue, blow it into Flame.”

2. Rights, Resistance, and Revolution in the Western Tradition: Early Protestant Foundations by Jonas Robitscher Professor of Law and Director of the Center for the Study of Law and Religion at Emory University

3. On the Rights of Magistrates Over their Subjects, 1574, Concerning the Rights of Rulers Over Their Subjects and the Duty Of Subjects Towards Their Rulers. A brief and clear treatise particularly indispensable to either class in these troubled times. By Theodore Beza

4. How American Small Businesses Are Being Coerced To Help Build The Oligarchy by Christopher Bedford

8. This Earth Day, Remember How Often Environmental Alarmists Are Wrong