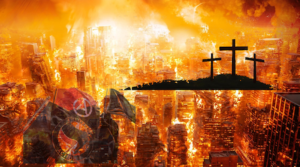 I am more than delighted to have my good friend and business partner George Brennan on the program. We are discussing Religion and Burning Cities in that G. K. Chesterton – C. S. Lewis kind of way. We will explain that in the 1st Segment of the program.

We will be approaching the Burning of the Cities in a manner that capitalizes on George’s work in ‘sustainability’ over the decades that I’ve worked with him. Let me tease you with the idea that ‘sustainability’ is better understood from the view of The Tree Hugging Capitalist.

Now, how is it that modern Religion and Burning Cities have any connection. To some extents these are two separate topics but they do have several points of intersection. This was true during the founding of the nation and is continuing to prove true when morality and virtue are at the low point.

In short, it all revolves around Citizenship and understanding what that is from what I discussed last week, beginning with what is your ‘Political Theology?’ For this program, it is necessary to understand Citizenship in a present time reference and an eternal reference.

In the present time, living here and now, Citizenship takes on two roles: one in time and space, the other (whether you like it or not) spiritual.

Presently, those who live in a Constitutional American are ‘Sovereign Citizens.’ I have discussed this on other programs and will do another program on it in the near future. The point regarding this role is that ‘being a Sovereign Citizen’ is forgotten, not taught and hence overwhelmed by those in government and bureaucracies to the extent that Citizens were force to self-imprison by bureaucratic rule.

The second role is spiritual. Those that understand Biblical truth know that there is the eternal citizenship. Based on Biblical truth, your citizenship is well identified and is established in timelessness – forever. Where that citizenship will have you reside is clear as one understands truth.

How does this fit into Burning Cities? The actions of a Sovereign Citizen would operate in accordance with Virtue, Morality and Principles expressed in good Constitutional governance. Where as those who have no sense of the former will operate in accordance to every contrary principle of which the nation and states were formed for.

I have to say that I almost trashed All that was done for this Saturday’s program to start over. As you know, I pre-record the program on Thursdays and it takes a lot of post processing to get this out to the station producers as well as put it up on YouTube and the samueladamsreturns.net web site. Yet, the news that has come out over the last 30 hours really had me considering redoing everything. Some of you may not like Breitbart but these two article put the point in context:
– Counter-Terror Expert: Feds Unaware of Antifa, Black Lives Matter Communist Connections, Objectives

The fact that I was taught in the military to recognize, identify, understand and expose communists that were seeking America’s secrets gives me insights that most don’t have. Also, I remember Cater killing those programs! Anyway…..

The stopper to trashing the program George and I have prepared for you is that, I already sent the program files to the producer at Liberty Works Radio Network and the Producer at WTTP-LP FM Lima.

What set me off were the articles noted about Antifa and that finally – finally those in government were listening to the reality that communists are the agitators in the various groups burning our cities. I want to severely chastise all who have turned deaf ears, blind eyes and tied tongues, especially pastors, to this reality over the last eighty years. But, good sense has prevailed and the show will go on as planned.

Another program for another day.

So George Brennan and I are in no way a Chesterton or Lewis. But we are both well read and established in our Faith in Christ for salvation. George being a Conservative Orthodox Roman Catholic and myself as a Sam Adams Biblical Reformed Puritan – we are developing and proposing a web site that should be entertaining and thought provoking.

Let me just say that George will bring a totally different spin to what is going on with Burning Cities. He will elaborate not only on the radical left but the full context of environmentalism and sustainability as a seeded means for: how will the infrastructure be rebuilt after the smoke clears from the Burning Cities?

During the Shays’ Rebellion, Sam Adam was 100% for calling in the troops and hanging the rioters.

It is interesting that in the context of the famers insurrection in 1786 a demand by present day Citizens could be looked at as a very loose association made by all who are affected by the Chicom Flu debacle. But what about the violent reaction of the present Burning Cities for less than the economic demise of those who earned what they could rise up about.

There is more to the Burning Cities in our present time than meets the criteria from the Shays’ Rebellion or the economic disaster of a flu.

More so, the tragic death of one man flaming the cities across these United States is not the catalyst it is being made out to be. But to learn from Sam Adam and Shays’ Rebellion is to observe the workings of a strong position of righteousness and that of political maneuvering. We will now watch and see if political maneuvering brings righteousness and good governance or will these United States be forever transformed from Founders original intent.

3. None Dare Call It Treason – 25 Years Later By John Stormer

4. We were warned about Communism here in the US back in the ’60’s: Original in pdf – None Dare Call It Treason By John Stormer

Comments Off on 6-6-20 Religion and Burning Cities