9-5-20 Christians Must Vote For Federalism 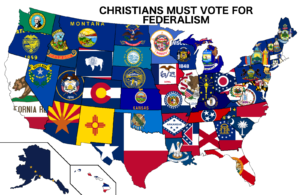 Christians Must Vote For Federalism… But Wait! What is it? How does it work? Who is functionally implementing Federalism? I will be exploring Federalism for Christian Citizens and mostly pastors that have little to no understanding of this core fundamental of governance.

I will be opening pandora’s box with touching on Federal Theology as well. The focus of the two correlated in the root word – Federal.

For those that will skip listening to the program – The simple reality is that President Trump is re-establishing Federalism as much as possible in the mires of the deep cesspool called the swamp.

I suggest that you head down to the References for further reading and understanding of Federalism that I will highlight in this program.

I am strongly motivated in taking on the subject of ‘A Defense Of Liberty Against Tyrants’ relative to these United States. There is a requirement for Christian Resistance that is historical and Biblical. In considering the principles of this Nations Founding and those parallel to, if not exact principles of, the Reformation. I was stunned by two recent articles. These articles run the gambit of ecclesiastical mental manipulation to a revelation by a major Christian leader that Politics does matter for the wellbeing of Christ’s Church.

Ecclesiastical mental manipulation: The first article I read a couple of weeks ago was: ‘2,700 evangelicals warn against politicizing coronavirus, urge Christians to take vaccine’ – Now, what these 2,700 fail in, and I do mean grossly fail to understand, is that the Chicom Flu is already politicized. As most of you who are reading, researching and finding out by recent CDC reporting, leftists, media and political despots are more than encouraging Free Citizens to capitulate to the tyranny of bureaucrats. So, I’ll let you do your own research on those 2,700 evangelicals to find out their political and economic positioning in relationship to their urges.

I will leave the first article as a research project into my core Scriptures undergirding this program: Hosea 8:4 and Ezekiel 11:1 -13

Now concerning the article that ‘Politics does matter’ was a shocker that I discovered as a last minute look on the ChristianPost.com site. ‘John MacArthur says ‘true believers’ will vote for Trump, can’t affirm abortion and trans activism.’ Now, many of you know that I have been very critical of John MacArthur for his preaching against political participation. I have to eat my words at this moment in time.

So let me be clear in that as you know, I prerecord the programs. I did not read the full article before doing the program. I only read the headlines. Yet this is a critical statement in that MacArthur is being explicit and for moral reasons. Again, I think that it would be even better to explore the article and determine if he identifies the Federalism as the reason Christians should Vote for Trump.

Now, I am on the side of John MacArthur 100% as he is justified in the Defense Of Liberty Against Tyrants and properly implementing Christian Resistance. My caveat is that this Resistance could have begun in the ‘70’s.

In reflection to the first section that delves into Federalism and the latter article just mentioned that exemplifies Christian Resistance, one will have to hear my thoughts on the correlation of the two. Something to tease you with is the Merriam-Webster definition of Federal Theology:

‘: the theological system which rests upon the beliefs (1) that before the Fall man was under a covenant of works by which God through Adam promised man eternal blessedness if he kept his commandments and (2) that since the Fall man has been under a covenant of grace by which God by his grace promises the same blessings to all who believe in Christ

Please recall from the last program and in my book ‘From Covenant To The Present Constitution,’ that I explain that our system of governance is Federal (covenantal) and republican with the context of a Constitution.

So I’ll leave a further discussion on this with the theology majors.

1776: Witherspoon, Dominion of Providence over the Passions of Men (Sermon)

This phenomenal sermon is one that is obscure to moderns. I find it refreshing in looking at our present war for Liberty Against Tyrants. Here is an interesting quote from the complete sermon relative to this program:

‘Upon the whole, I beseech you to make a wise improvement of the present threatening aspect of public affairs, and to remember that your duty to God, to your country, to your families, and to yourselves, is the same. True religion is nothing else but an inward temper and outward conduct suited to your state and circumstances in providence at any time. And as peace with God and conformity to him, adds to the sweetness of created comforts while we possess them, so in times of difficulty and trial, it is in the man of piety and inward principle, that we may expect to find the uncorrupted patriot, the useful citizen, and the invincible soldier. God grant that in America true religion and civil liberty may be inseparable, and that the unjust attempts to destroy the one, may in the issue tend to the support and establishment of both.

I cannot help embracing this opportunity of making a remark or two upon a virulent reflection thrown out against this doctrine, in a well known pamphlet, Common Sense. The author of that work expresses himself thus: “If the first king of any country was by election, that likewise establishes a precedent for the next; for to say, that the right of all future generations is taken away, by the act of the first electors, in their choice not only of a king, but of a family of kings forever, hath no parallel in or out of scripture, but the doctrine of original sin, which supposes the free will of all men lost in Adam; and from such comparison, and it will admit of no other, hereditary succession can derive no glory. For as in Adam all sinned, and as in the first electors all men obeyed: as in the one all mankind were subjected to Satan, and in the other to sovereignty; as our innocence was lost in the first, and our authority in the last; and as both disable us from re-assuming some former state and privilege, it unanswerably follows that original sin and hereditary succession are parallels. Dishonorable rank! Inglorious connexion! Yet the most subtle sophist cannot produce a juster simile.” Without the shadow of reasoning, he is pleased to represent the doctrine of original sin as an object of contempt or abhorrence. I beg leave to demur a little to the candor, the prudence, and the justice of this proceeding.’

In respect to True Federalism!

I am to acknowledge your several Favours of the 5th and 27 of October, the one by the Post and the other by our worthy Friend Mr Gerry. The Session of our General Court which lasted six Weeks, and my Station there requiring my punctual & constant Attendance, prevented my considering the new Constitution as it is already called, so closely as was necessary for me before I should venture an Opinion. I confess, as I enter the Building I stumble at the Threshold. I meet with a National Government, instead of a Federal Union of Sovereign States. I am not able to conceive why the Wisdom of the Convention led them to give the Preference to the former before the latter. If the several States in the Union are to become one entire Nation, under one Legislature, the Powers of which shall extend to every Subject of Legislation, and its Laws be supreme & controul the whole, the Idea of Sovereignty in these States must be lost. Indeed I think, upon such a Supposition, those Sovereignties ought to be eradicated from the Mind; for they would be Imperia in Imperio justly deemd a Solecism in Politicks, & they would be highly dangerous, and destructive of the Peace Union and Safety of the Nation. And can this National Legislature be competent to make Laws for the free internal Government of one People, living in Climates so remote and whose “Habits & particular Interests” are and probably always will be so different. Is it to be expected that General Laws can be adapted to the Feelings of the more Eastern and the more Southern Parts of so extensive a Nation? It appears to me difficult if practicable. Hence then may we not look for Discontent, Mistrust, Disaffection to Government and frequent Insurrections, which will require standing Armies to suppress them in one Place & another where they may happen to arise. Or if Laws could be made, adapted to the local Habits, Feelings, Views & Interests of those distant Parts, would they not cause Jealousies of Partiality in Government which would excite Envy and other malignant Passions productive of Wars and fighting. But should we continue distinct sovereign States, confederated for the Purposes of mutual Safety and Happiness, each contributing to the federal Head such a Part of its Sovereignty as would render the Government fully adequate to those Purposes and no more, the People would govern themselves more easily, the Laws of each State being well adapted to its own Genius & Circumstances, and the Liberties of the United States would be more secure than they can be, as I humbly conceive, under the proposed new Constitution. You are sensible, Sir, that the Seeds of Aristocracy began to spring even before the Conclusion of our Struggle for the natural Rights of Men, Seeds which like a Canker Worm lie at the Root of free Governments. So great is the Wickedness of some Men, & the stupid Servility of others, that one would be almost inclined to conclude that Communities cannot be free. The few haughty Families, think They must govern. The Body of the People tamely consent & submit to be their Slaves. This unravels the Mystery of Millions being enslaved by the few! But I must desist—My weak hand prevents my proceeding further at present. I will send you my poor Opinion of the political Structure at another Time. …’

1. Regarding ‘Selection of kings, leaders and authority’ Bible Search: select

5. Let’s Be Two Americas: The Case for Federalism

Comments Off on 9-5-20 Christians Must Vote For Federalism