9-12-20 Christian Resistance is Constitutional and Biblical 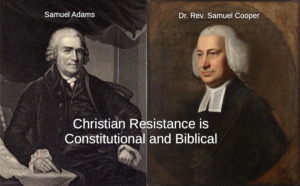 It is not a question of ‘If’ Christian Resistance is Constitutional and Biblical, it is can you believe truth or continue in the deception of disinformation from the uneducated. Those on social media received a preparatory homework assignment from me which gave faithful documentation to address this point of Christian Resistance is Constitutional.

We will discuss the sermon of Samuel Cooper “On The Commencement of the Constitution” 1780. Dr. Cooper takes us through the design of constitutionalism from a Biblical covenantal perspective. Through this it is well established that it was the Liberty set in motion by Christ and the moral integrity of Christianity that allowed the American Revolution the authority to bring a new nation forward.

He gives a grave look at the alternative of constitutionalism, which we are in essence seeing in our present because Christians have not ‘resisted’ the take over of governance by non-Christians:

“Such are the fruits of lawless and despotic power in a mortal man intoxicated with it: Such desolations does it make in the earth — Such havoc in the family of God, merely for the sake of enlarging its bounds and impressing its terror on the human bosom. It often, indeed, claims a divine original, and impudently supports itself not barely on the permission, but the express designation of him “whose tender mercies are over all his works;” though it exactly resembles the grand adversary of God and man, and is only a “roaring lion that seeketh whom he may devour.” To plead a divine right for such a power is truly to teach “the doctrine of devils.” It covets every thing without bounds: It grasps every thing without pity: It riots on the spoils of innocence and industry: It is proud to annihilate the rights of mankind; to destroy the fairest constitutions of wisdom, policy and justice, the broadest sources of human happiness: While it enslaves the bodies, it debases the minds of the offspring of God: In its progress it changes the very face of nature, it withers even the fruits of the earth, and frustrates the bounties of our common parent. “Before it is the garden of God, behind it is a desolate wilderness.”

Gee, that outlines the demon-crat party platform, BLM and Antifa in one paragraph. Oh, it describes those pastors and congregations that give into the ‘doctrine of devils.’

For more on ‘Government Corrupted By Vice,’ the homework ready of Samuel Langdon was assigned. We may not have time to cover this sermon given by Dr. Langdon, who like Samuel Cooper was a classmate of Sam Adams.

Oh, I want to let you know that I touch on an interview of Jim Garlow throughout this program. It is very encouraging to me in that he says many of the same facts and truths that I have been speaking of for years. Please take the time to check out that interview, which is noted in the References.

Our homework was to continue in the study of ‘Vindiciae Contra Tyrannos – A Defense of Liberty Against Tyrants’ by de Mornay. We are delving into Question Two part three: ‘Whether it be lawful to take arms for religion.’ The simple answer is ‘Yes!’ but the authority is established for those placed in office to defend the Christian religion. But, pastors need to have been teaching this for the last 100 years.

We will go over what de Mornay wrote regarding the Biblical facts concerning Christian Resistance. As short tease from this section:

But I would willingly demand of such exceptionalists, whether that they think by the coming of Jesus Christ in the flesh, that magistrates have lost their right in the sword of authority? If so, Saint Paul contradicts them. He says that the magistrates carry not the sword in vain, (Rom. 13:4) and did not refuse their assistance and power against the violence of those who had conspired his death. And if they agree with this, to what purpose do they think the magistrates should bear the sword, if it be not to serve God who has committed it to them, to defend the good and punish the bad? Can they do better service than to preserve the church from the violence of the wicked, and to deliver the flock of Christ from the swords of murderers? In addition, I would ask whether they think that all use of arms is forbidden to Christians? If this is their opinion, then I would know of them, why Christ did grant to the centurion his request? (Mat. 8:5-13) And why did He praise him so highly? Why does Saint John the Baptist command the men at arms to content themselves with their pay, and not to use extortion to get more, rather than persuading them to leave their calling? (Luke 3:14) Why did Saint Peter baptize Cornelius the Centurion, who was the first-fruits of the Gentiles? And why didn’t he advise him to quit the army? (Acts 10:48)

Think about all the pastors giving in to the leftist ideologies of our present time. Nothing new when it comes to the opposing political elite, the Tories, and the Christians with skewed theology.

“…Nothing can equal the barefaced Falshood of the Quakers & Tories in this City, unless perhaps their Folly, in giving out that M. Gerard does not come in the Character of a publick Minister, but only to obtain Pay for the Stores we have receivd from that Country. These Quakers are in general a sly artful People, not altogether destitute, as I conceive, of worldly Views in their religious Profession. They carefully educate their Children in their own contracted Opinions and Manners, and I dare say they have in their Hearts as perfect a System of Uniformity of Worship in their Way, and are busily employd about spiritual Domination as ever Laud himself was, but having upon professed Principles renouncd the Use of the carnal Weapon, they cannot consistently practice the too common Method made use of in former times, of dragooning Men into sound Beliefe. One might submit to their own inward Feelings, whether they do not now & then secretly wish for fire from Heaven in support of their Cause, in order to bring them upon a footing with those whose Consciences dictate the kindling fires on Earth for the pious Purpose of convincing Gainsayers, and who keep the Sword in their Hands to enforce it. He who in the Spirit of the Apostle professes to wish Peace to all those who love the Lord Jesus Christ in Sincerity, must discover an unmortified Pride & a Want of Christian Charity to destroy the peace of others who profess to have that sincere Affection to the Common Master, because they differ from him in Matters of mere opinion. But the Post is just going. I must therefore conclude with assuring you that I am affectionately,”

The economics in life changes often. I discuss what has been occurring personally and a tad about domestic Hunter Biden insanity. Keeping this short, Please let everyone you know in Ohio to heat up their Fall with our Boutique Pepper Jams at Pepper-Licious.

2. On Christian Disobedience #5: A Sermon for Five by Doug Wilson

3. Vindiciae Contra Tyrannos A Defense of Liberty Against Tyrants by de Mornay

4. A Sermon Preached before His Excellency JohnHancock, […] of the Commonwealth of Massachusetts, October 25, 1780. Beingthe Day of the Commencement of the Constitution, and Inauguration of the NewGovernment by Dr. Rev. Samuel Cooper

5. Government Corrupted by Vice (1775) given by Dr. Rev. Samuel Langdon