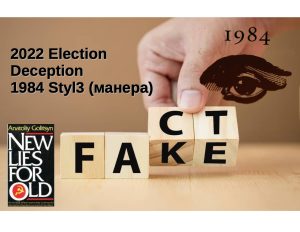 deception circa 1984 MaHepa (Russian for Style). My topic for this week changed three times as I was looking at historical aspects of economics in the founding era, John Adams Dissertation on Canon and Feudal law as well as the pressing November Election. With the election in mind, I was impacted by a long series of articles regarding the various national and country wide local elections. Make sure you read the Sam Adams Wisdom section since it is pertinent to the expected move toward a restoration of a republic in theory.

Not only that, I took the time to watch a replay of a Trump rally in Texas. What was significant with this rally is that Trump makes a statement that we are now beyond socialism. He was emphatic that we are experiencing a communist regime. Finally. Factual truth.

I have been to a number of communist regimes. And I’ve studied communism for decades. Yupper, we are about 90% there. With that in mind and the possibility of Pelosi so confident that the demons will retain Congress, I had to go to my archives.

Ah, there it was, my two digital copies of Anatoliy Golitsyn’s books ‘New Lies for Old,’ published, you guessed it, in 1984 and ‘The Perestroika Deception.’ And again, the frustration that Citizens are duped sheep who go blindly into the slaughterhouse got me spurs digging in. With all that was written in the 1960’s regarding communism, I have to emphasize the quote that Thomas Sowell uses in his book on basic economics,

Facts are stubborn things, and whatever may be our wishes, our inclinations, or the dictates of our passions, they cannot alter the state of facts and evidence. -JOHN ADAMS

Truth maters. Facts and evidence help establish truth and with that, there is a revealed Truth of all that is which comes from the Creator.

So as to keep this newsletter short, I now direct your attention to the 1963 Congressional Record in your references. Yes, it is the 45 Communist Goals to take down the United States. I comment on these on the program.

Next are the two article that cover the predictions of Anatoliy Golistyn. The amazing fact is in how many of his predictions have come to fruition and that we are living in what the communist have been planning for the United States since the 1940’s. Oh, and the war in Ukraine, well, that is in the plan too.

Here is an interesting summation of who Trump calls ‘crazy.’ They are not crazy as this quote points out,

“But they are not the only crazy persons.

While I was visiting with the Brazilian philosopher, Olavo de Carvalho, last month, he gifted me a fascinating little volume by Harry Redner titled, The Malign Masters. The book suggests that the unifying undercurrent of the last hundred years of Western philosophy has been solipsism, which may be defined as: “A theory in philosophy that your own existence is the only thing that is real or that can be known.” – Provokatsiya Commentary for 16 October 2016 By J.R. Nyquist

I cover several articles by Nyquist as well as a complementary article on Trevor Louden’s web site. I highly recommend that you spend some time on J R Nyquist website and blog.

All said, considering China and that Putin is still tops in the Russian communist party, it is clear that communism is not dead and has successfully worked its plan – to this point.

Considering the 2022 midterm election, this is something to ponder as the expectation is that the repudicans will win the majority in federal elections as well as down ticket:

Let me talk with you a little about the Affairs of our own Colony. I perswade my self, my dear Friend, that the greatest Care and Circumspection will be used to conduct its internal Police with Wisdom and Integrity. The Eyes of Mankind will be upon you to see whether the Government, which is now more popular than it has been for many years past, will be productive of more Virtue – moral and political. We may look up to Armies for our Defence, but Virtue is our best Security. It is not possible that any State shd long remain free, where Virtue is not supremely honord. This is as seasonably as it is justly said by one of the most celebrated Writers of the present time. Perhaps the Form of Governmt now adopted & set up in the Colony may be permanent. Should it be only temporary the golden opportunity of recovering the Virtue & reforming the Manners of our Country should be industriously improvd. Our Ancestors in the most early Times laid an excellent Foundation for the security of Liberty by setting up in a few years after their Arrival a publick Seminary of Learning; and by their Laws they obligd every Town consisting of a certain Number of Families to keep and maintain a Grammar School. I shall be very sorry, if it be true as I have been informd, that some of our Towns have dismissd their Schoolmasters, alledging that the extraordinary Expence of defending the Country renders them unable to support them. I hope this Inattention to the Principles of our Forefathers does not prevail. If there should be any Danger of it, would not the leading Gentlemen do eminent Service to the Publick, by impressing upon the Minds of the People, the Necessity & Importance of encouraging that System of Education, which in my opinion is so well calculated to diffuse among the Individuals of the Community the Principles of Morality, so essentially necessary to the Preservation of publick Liberty.

There are Virtues & vices which are properly called political. “Corruption, Dishonesty to ones Country Luxury and Extravagance tend to the Ruin of States.” The opposite Virtues tend to their Establishment. But “there is a Connection between Vices as well as Virtues and one opens the Door for the Entrance of another.” Therefore “Wise and able Politicians will guard against other Vices,” and be attentive to promote every Virtue. He who is void of virtuous Attachments in private Life, is, or very soon will be void of all Regard for his Country. There is seldom an Instance of a Man guilty of betraying his Country, who had not before lost the Feeling of moral Obligations in his private Connections. Before [Dr. Benjamin Church, Jr.] was detected of holding a criminal Correspondence with the Enemies of his Country, his Infidelity to his Wife had been notorious. Since private and publick Vices, are in [Volume 1, Page 669] Reality, though not always apparently, so nearly connected, of how much Importance, how necessary is it, that the utmost Pains be taken by the Publick, to have the Principles of Virtue early inculcated on the Minds even of Children, and the moral Sense kept alive, and that the wise Institutions of our Ancestors for these great Purposes be encouragd by the Government. For no People will tamely surrender their Liberties, nor can any be easily subdued, when Knowledge is diffusd and Virtue is preservd. On the Contrary, when People are universally ignorant, and debauchd in their Manners, they will sink under their own Weight without the Aid of foreign Invaders.

1. “A Government of Laws and Not of Men”: John Adams, Attorney, and the Massachusetts Constitution of 1780 by Amanda A. Mathews

2. NEW LIES FOR OLD – The Communist Strategy of Deception and Disinformation by ANATOLIY GOLITSYN published 1984

6. List of Democratic Socialists of America members who have held office in the United States