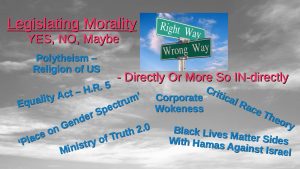 Those on that are godless and of the socialists, Marxist, fascist, generally left political views scream at defenders of Constitutionalism and Judeo-Christian Foundations: ‘YOU CAN’T GO AROUND LEGISLATING MORALITY!’ Really?

We have been and are in the battle of ideologies no different than in the Founders day. It is critical that we understand that those who are Constitutionally minded must be God minded as the Founders were. With that, the question of legislating morality is a simple one in that every law, every ordinance, every resolution and every court judgement is making a moral determination on the people and society to which it is being applied. Hence, the real question is: Whose and which morality is being Legislated?

Hearing after speaking. I wanted to share this video-blog post from Doug Wilson that I happened to listen to after I had already produced my program for the producers. Hopefully you will go listen to it after my program is released tomorrow. OK, that was levity…You can listen to Pastor Wilson when it works for you.

Doug impressed me with his perspective on what ‘free speech would look like in a Christian Theocracy.’ Why, you ask? Well because Sam Adams in developing his arguments of true republicanism took the same position as Doug quantifies in his posting. Check out that post for a modern eloquence of Foundational Sam Adams Principles 101, which are Biblical Reformation Principles.

I was temped to compile a volume of original foundational material on Legislating Morality. My better judgement of time and resources convinced me that these short comments and leaving you with the resources of the program and some examples of present legislative or what I call inductive morality would be a better way to go. Therefore instead of my normal long windedness I will keep it short.

NOT! When can I keep anything short?

‘I have long been apprehensive, you know, that false Ideas of Politeness would injure the Minds of our Countrymen and prove destructive to Morals and Liberty. But I own, I did not expect that the most ridiculous Folley would have taken so early and large a Stride as it appears to have done in the Instance you mention.’1

‘An author of New England,2 says, moral philosophy is just reducing infidelity to a system. But however specious the objections, they will be found at bottom not solid.3 — If the Scripture is true, the discoveries of reason cannot be contrary to it;’ and therefore, it has nothing to fear from that quarter…’

‘…The noble and eminent improvements in natural philosophy, which have been made since the end of the last century, have been far from hurting the interest of religion; on the contrary, they have greatly promoted it. Why should it not be the same with moral philosophy, which is indeed nothing else but the knowledge of human nature? It is true, that infidels do commonly proceed upon pretended principles of reason. But as it is impossible to hinder them from reasoning on this subject, the best way is to meet them upon their own ground, and to show from reason itself, the fallacy of their principles. I do not know any thing that serves more for the support of religion than to see from the different and opposite systems of philosophers, that there is nothing certain in their schemes, but what is coincident with the word of God.

We must distinguish here between the light of nature and the law of nature: by the first is to be understood what we can or do discover by our own powers, without revelation or tradition: by the second, that which, when discovered, can be made appear to be agreeable to reason and nature.’

‘….Moral philosophy is divided into two great branches, Ethics and Politics, to this some add Jurisprudence, though this may be considered as a part of politics. Ethics relate to personal duties, Politics to the constitution, government, and rights of societies, and jurisprudence, to the administration of justice in constituted states.’

‘Despite the obvious importance of his contributions, Wilson continues to struggle for attention in comparison with the other founders at least in part because of his personal life. Wilson’s adult life was marked by land-development schemes, a corresponding inability to reconcile his quest for individual wealth with a scrupulous attention to the public interest, and ultimately the distinction of being the only justice of the Supreme Court ever imprisoned for debt. That made Wilson something of a paradox. He was trained in the Scottish Moral Enlightenment tradition of Thomas Reid and Francis Hutcheson, which stressed, among other things, the close relationship among public virtue, moral commitment to the public interest, and respect for the will of the people based on their intrinsic good. This philosophical perspective, however, collided with Wilson’s fabled scramble for wealth, power, and social station. Wilson’s articulated philosophy was based on a relatively optimistic view of human nature; his personal conduct betrayed to his critics a more pessimistic assessment.’

Lastly regarding Wilson: ‘Wilson also advocated for federalism and the related concept of dual sovereignty. Since the people were the foundation of all government, they could construct as many levels of authority as they wished. Thus, the people could not only establish a national government of enumerated powers but simultaneously lend their support to state governments vested with the traditional police powers of health, safety, morals, and welfare. Ironically, both John C. Calhoun and Abraham Lincoln in the years leading up to the Civil War found in Wilson’s ideas arguments to support either the limited or the perpetual nature of the Union.’

‘…Many pointed allusions and partial descriptions lie varices us in the dignity of thinking beings. Far from me, and from my friends, be such frigid philosophy as may conduct us, indifferent and unmoved, over any ground which has been dignified by wisdom, bravery or virtue. That man is little to be envied whose patriotism would not gain force on the plain of Marathon, or whose piety would not grow warmer among the ruins of Iona.”

The associations which are the most aflecting are moral. The venerable monuments of the past, and localities connected with which great events transpired, are invested with irresistible attractions to a susceptible heart and cultivated mind. They snatch the soul away in rapture, as if it had already traversed the tomb, and on the bosom of immensity imbue it with the inexhaustible glories which Jehovah has diffused through the universe :

” The mind hath no horizon,

It looks beyond the eye, and seeks for mind

‘As early as 1759, Adams could see the bigger picture in studying the law, as he wrote in his diary. ‘Labour to get distinct Ideas of Law, Right, Wrong, Justice, Equity. Search for them in your mind, in Roman, grecian, french, English Treatises of natural, civil, common, Statute Law. Aim at an exact Knowledge of the Nature, End, and Means of Government. Compare the different forms of it with each other and each of them with their Effects on public and private Happiness. Study Seneca, Cicero, and all other good moral Writers. Study Montesque, Bolinbroke, [Vinnius?], etc. and all other good, civil Writers, etc.’

‘The first colonists of Massachusetts had come to New England in an effort to practice their religious beliefs without persecution. The Puritans carried with them a profound respect for the rule of law as it was vested in authority. Law was not simply a man made construction, but a manifestation of God’s will. It existed not merely to protect people from the aggressive tendencies of their fellow humans, but also to maintain the personal morality of individuals. Historian George Haskins notes, “Authority, that is, government and law, were thought to hav been made necessary by man’s fall from grace and subjection there to was regarded as a religious duty. The end of law was thus seen as the accomplishment of God’s will in a regenerate society bound together by a religious and political covenant.”7 The Book of the General Lawes and Libertyes Concerning the Inhabitants of Massachusetts printed in 1648 was the first codification of its kind in the English-speaking world8 and this early work expressed from its openings lines an understanding of the fundamental need for and purpose of laws: “For a Commonwealth without lawes is like a Ship without rigging and steeradge.”

‘…The Study and Practice of Law, I am sure does not dissolve the obligations of morality or of Religion.” He believed that he could use the law to promote human happiness and virtue while discouraging immorality and vice.’

INSTRUCTIONS OF HE TOWN OF BOSTON TO ITS REPRESENTATIVES IN THE GENERAL COURT. MAY, 1764.

‘Being Members of the Legislative Body, you will have a special Regard to the Morals of this People, which are the Basis of publick Happiness; & en deavor to have such Laws made if any are still want ing as shall be best adapted to secure them : and we particularly desire you carefully to look into the Laws of Excise, that if the Virtue of the People is endangerd by the Multiplicity of Oaths therein enjoynd or their Trade & Business is unreasonably impeded or embarrassd thereby, the Grievance may be redressd.

As the Preservation of Morals as well as Property & Right, so much depends upon the impartial Distri bution of Justice, agreable to good & wholesom Law:…’

This is a number of links that exemplify legislating morality directly and indirectly:

2. Transgender Activists Do Not Want You To Hear Of ‘Transition’ Regret

3. Why The Biden White House Declared War On Beauty In Architecture

– He? She? Ze? Colleges add gender-free pronouns for students

2  MS. C adds footnote: President Edwards. See his dissertation on Virtue. The reference presumably is to “The nature of true virtue,” the second of the elder Edwards’ “Two dissertations”, publish ed in one volume at Boston in 1765.

3  MS. A omits this sentence. * MS. A omits from this point to / do not know in the next paragraph, and instead reads : // the Scripture be true, no discovery of Reason can be contrary, & Rea son serves to illustrate.- confirm it: But us infidels endeavor {after their manner of reasoning) to overturn Revelation, the best way would be to meet them on their own ground & by Reason to demonstrate, there is nothing stable in their Arguments, & that their principles are altogether fallacious. MSS. B and C omit It is true that infidels in the next paragraph, and instead read : and yet may be an illustration and confirmation of it.

Comments Off on Episode 303: Legislating Morality