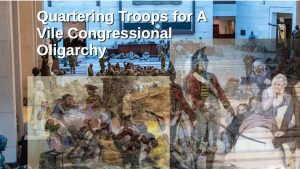 Thank You and Introduction

Before delving into the mirrors of history regarding our present Vile Congressional Oligarchy, I want to thank all the great Patriots from the Ohio Freedom Fighters in Medina that had me speaking this past Wednesday. I look forward to another opportunity to visit with them in the future

As way of introduction to this weeks program regarding the Quartering of Troops for A Vile Congressional Oligarchy, I had intended to discuss De-Valued American Virtue – Vile Bile and Putrid Vomit. In this program I give the opening salvo of this being what the national virtue is.

Oh, there are the Patriots and even some Patriot Pastors but, for what we see at all levels of governance and in education and, in culture, well, I believe the words after the dash describes America precisely.

No different than in 1768, the placing of troops in Washington D. C. with the fencing off the City is an act of aggravated assault on the Citizenry of America. The Boston Quartering Act, to quote Sam Adams is to,

‘…I dare challenge them, or any others to prove that there was the least necessity for them here, for the professed purpose of their coming, namely to prevent or subdue rebels and traitors: I will further venture to affirm, that he must be either a knave or a fool, if he has any tolerable acquaintance with the people of this town and province, nay, that he must be a traitor himself who asserts it. I know very well, that the whole continent of America is charged by some designing men with treason and rebellion, for vindicating their constitutional and natural rights: But I must tell these men on both sides the atlantic (both sides of the political aisle), that no other force but that of reason & sound argument on their part, of which we have hitherto seen but precious little, will prevail upon us, to relinquish our righteous claim…’

I walk you through the mirrors of history on the actions of Congress regarding January 6, 2021 and the Quartering Act of 1768. Sam Adams letter Signed “VINDEX” brings the underlying treachery of ‘designing men’ and women in our present time, to the not so quantum leap of time. You are correct in that the heart of mankind, the sinfulness, has not changed and sadly the Anti-Federalists predicted this very moment.

Here is were the rubber meets the road or better, the mirrors of history are the shattered by being locked in H. G. Wells’s ‘Time Machine’ set in the 18th Century. The Vile Congressional Oligarchy is detailed for us. At this point, all the references for the program are in The Anti-Federalist Papers Special Edition that you can download from The Federalist Papers web site. My referencing for this program is easier in that I can tell you what page to go to for this programs detailed references.

I do introduce you to Philanthropos in this program. The full letter is there for you to read on page 25 of The Anti-Federalist Papers Special Edition. Here are the top tidbits from: Anti-Federalist No. 7, Adoption of the Constitution Will Lead to Civil War , 6 December 1787 by Philanthropos

‘The time in which the constitution or government of a nation undergoes any particular change, is always interesting and critical. Enemies are vigilant, allies are in suspense, friends hesitating between hope and fear; and all men are in eager expectation to see what such a change may produce. But the state of our affairs at present, is of such moment, as even to arouse the dead …

[A certain defender of the Constitution has stated that objections to it] are more calculated to alarm the fears of the people than to answer any valuable end. Was that the case, as it is not, will any man in his sober senses say, that the least infringement or appearance of infringement on our liberty—that liberty which has lately cost so much blood and treasure, together with anxious days and sleepless nights—ought not both to rouse our fears and awaken our jealousy? … The new constitution in its present form is calculated to produce despotism, thraldom and confusion, and if the United States do swallow it, they will find it a bolus, that will create convulsions to their utmost extremities. Were they mine enemies, the worst imprecation I could devise would be, may they adopt it. For tyranny, where it has been chained (as for a few years past) is always more cursed, and sticks its teeth in deeper than before…’

I will really be bringing this letter to the present with commentary for you to close your eyes and see the present in these now so forgotten words.

Congressional Oligarchy Detailed – How Vile and Putrid Will It become – Is?

I delve into Federal Farmer X by Richard Henry Lee, 7 January, 1788 which is on Page 230 of the The Anti-Federalist Papers Special Edition. The question is ‘Will the House of Representatives Be Genuinely Representative?’ The discussion details how Congress, especially the House would become exactly as it presently is. The expectation of the Federalist that citizens would remain moral and lovers of Liberty are categorically countered by the reality that those who assume power within the structure of the Constitution would eventually devalue the States, the people and create the monolith of despotism that now exists in our fenced off granite palaces of the foul Federal system. As a Tease, the Federal Farmer ponders:

‘To palliate ( disguise the seriousness or gravity of (an offense)) for the smallness of the representation, it is observed, that the state governments in which the people are fully represented, necessarily form a part of the system. This idea ought to be fully examined. We ought to enquire if the convention have made the proper use of these essential parts; the state governments then we are told will stand between the arbitrary exercise of power and the people: true they may, but armless and helpless, perhaps, with the privilege of making a noise when hurt—this is no more than individuals may do. Does the constitution provide a single check for a single measure, by which the state governments can constitutionally and regularly check the arbitrary measures of congress? Congress may raise immediately fifty thousand men, and twenty millions of dollars in taxes, build a navy, model the militia, &c. and all this constitutionally. Congress may arm on every point, and the state governments can do no more than an individual, by petition to congress, suggest their measures are alarming and not right.’

I take you on a deep dive into this writing so that you know we are now in the completion of the predictions of the Anti-federalist.

Yet, There is HOPE! To find that hope I will continue bringing you truth to act upon. But a tad more that Mr. Lee initiates as problematic and in this paper makes suggested corrections for us:

‘These few considerations bring us to the very strong distinction between the plan that operates on federal principles, and the plan that operates on consolidated principles. A plan may be federal or not as to its organization; each state may retain its vote or not; the sovereignty of the state may be represented, or the people of it. A plan may be federal or not as to its operations—federal when it requires men and monies of the states, and the states as such make the laws for raising the men and monies—Not federal, when it leaves the states governments out of the question, and operates immediately upon the persons and property of the citizens. The first is the case with the confederation, the second with the new plan: in the first the state governments may be [a] check, in the last none at all. This distinction I shall pursue further hereafter, under the head before mentioned, of amendments as to internal taxes. And here I shall pursue a species of checks which writers have not often noticed.’

And consider this statement in relationship to our present 21st Century position of transitioning the form of government:

‘But to obviate all objections to the proposed plan in the last resort: it is said our people will be free, so long as they possess the habits of freemen, and when they lose them, they must receive some other forms of government. To this I shall only observe, that this is very humiliating language, and can, I trust, never suit a manly people, who have contended nobly for liberty, and declared to the world they will be free.’

I’ll leave you with this to ponder – Do the people of these United States really want to be free?

I’m leaving you with this one to read. I am not talking about it on the program but may take it up in the weeks to come. It is the issue Right NOW confronting US nose to nose. This essay was written anonymously by “VOX POPULI,” and appeared in The Massachusetts Gazette on October 30, 1787.

Anti-Federalist No. 59, The Danger of Congressional Control of Elections by Vox Populi

You can find it on page 236 of The Anti-Federalist Papers Special Edition.

You will have to go to the following reference to read all of the Manifesto. I did not have time to discuss this on the program as I intended. Maybe next week. Here I include an opening quote. Yes, I wonder how much we could substitute Congress or the Federal Government Institutionalism for ‘Great Britain?’

MANIFESTO OF THE CONTINENTAL CONGRESS.

The United States having been driven to hostilities by the oppressive and tyrannous measures of Great Britain, having been compelled to commit the essential rights of men to the decision of arms, and having been at length forced to shake off a yoke which had grown too burdensome to bear, they declared themselves free and independent.

Confiding in the justice of their cause; confiding in Him who disposes of human events; although weak and unprovided, they set the power of their enemies at defiance.

In this confidence they have continued through the various fortunes of three bloody campaigns, unawed by the power, unsubdued by the barbarity of their foes. Their virtuous citizens have borne without repining the oss of many things which make life desirable. Their brave troops have patiently endured the hardships and dangers of a situation fruitful in both beyond former example.

The Congress, considering themselves bound to love their enemies as children of that Being who is equally the Father of all, and desirous, since they could not prevent, at least to alleviate the calamities of war, have studied to spare those who were in arms against them, and to lighten the chains of captivity.

The conduct of those serving under the King of Great Britain hath, with some few exceptions, been diametrically opposite. They have laid waste the open country, burned the defenceless villages, and butchered the citizens of America.

Their prisons have been the slaughter-houses of her soldiers, their ships of her seamen, and the severest injuries have been aggravated by the grossest insults.

Foiled in their vain attempts to subjugate the unconquerable spirit of freedom, they have meanly assailed the representatives of America with bribes, with deceit, and the servility of adulation. They have made a mock of religion by impious appeals to God, whilst in the violation of His sacred command. They have made a mock even of reason itself, by endeavoring to prove that the liberty and happiness of America could safely be intrusted to those who have sold their own, unawed by the sense of virtue or of shame…’

Embedded in the text.

Comments Off on Episode 304: Quartering Troops for A Vile Congressional Oligarchy