Episode 308: Subversion Of A Nation: CRT

Subversion Of A Nation 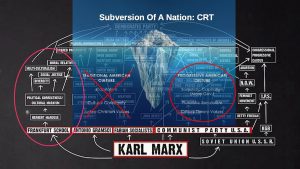 This week my focus is on the Subversion that has been occurring for decades in education and is now the full blown Marxist push via CRT. Now CRT is not new, it is right out of the 1930’s Frankfurt School. With that in mind, there are a lot of pundits out there that are loudly blasting CRT for what it is. This program brings it home to Ohio as an example for every State in the Nation.

One key element to understand is that the subversion is insidious by virtue of the vocabulary woven into every subject taught in schools. The acronym CRT is the tip of the iceberg in how the real language has word definition manipulation throughout the educational system. What that means is that your school or board of education may claim no CRT is in the district BUT – ask to see the curriculum and you will find every buzzword of Critical Theory in every subject taught.

Joining me is Kirsten Hill. She is an elected Member to the Ohio State Board of Education. The emphasis on elected is critical as you will learn from our conversation. Kirsten will take us through the ‘midnight’ vote that happened last July in Ohio. A resolution was past that is foisting subversion into the school districts of Ohio. This is the same mechanism of subversion that many others are experiencing in their States.

Let me sum it with this generalized statement: ‘words have meaning that not always is what the word should mean.’ We will discuss this more.

Also joining me is Tom Hach. Tom has been on the program in the past but is here not only as a local and state wide Liberty leader but as a Local School Board Member. Tom will be interjecting a lot in respect to CRT implementation at the local level.

Tom Hach and Kirsten Hill will sum up the various Action Groups in Ohio that folks can get involved with.

Unwinding the Subversion of Independence Day

So the O’biden Administration and the Marxist Critical Theory ilk are diminishing the historical significance of Independence Day. What I highly recommend is that you take in these two videos that bring Independence and Liberty back in full focus.

Doug Wilson is a former Navy shipmate of mine. He is now a top Theologian and Thinker who understands the Truth of Church and State. In my book, he knocks it out of the park with this blogcast: An Apologetic for the Fourth of July | Doug Wilson

This following video accentuates much of what Doug brought historically to the forefront.

The next one is a conversation between Larry Kudlow and Mark Levin: Mark Levin on the fight against those who worship government Levin has it spot on. We are in a lawless Marxist revolution. Stop calling them ‘Progressives’ and tell it like it is – They are Marxists!

Those that do not understand Foundational Truth will question my use of Subversion. In our discussion for the program Kirsten Hill notes that the majority of those who promote Critical Theory or its component CRT are, ‘Useful Idiots’, that do not know the history of America nor that of Marxism. Therefore I am providing the definition from Daniel Webster:

What we are experiencing in our schools, churches and all levels of government is subversion in its full devilish masquerade.

The conversation with Kirsten Hill and Tom Hach address the subversion of the education system in Ohio and a few ways that local parents and school boards can be aware, educated on this insidiousness, as well as Action Steps.

This information is only the tip of the iceberg for everyone in every State to look into the deeper aspects of curriculums.

For those that want to see the slides Kirsten has in her presentation regarding the embedded language of CRT and Critical Theory itself in all aspects of curriculum, You will have to watch the video ON SATURDAY at the blog post on Samuel Adams Returns web site. I will make the pdf of her presentation available at the Resources section of the blog post on Saturday as well.

Adams attended the Massachusetts ratifying Convention between February 1st and 6th, 1788. Here is a portion of his speech to the convention:

…The Session of our General Court which lasted six Weeks, and my Station there requiring my punctual & constant Attendance, prevented my considering the new Constitution as it is already called, so closely as was necessary for me before I should venture an Opinion. I confess, as I enter the Building I stumble at the Threshold. I meet with a National Government, instead of a Federal Union of Sovereign States. I am not able to conceive why the Wisdom of the Convention led them to give the Preference to the former before the latter. If the several States in the Union are to become one entire Nation, under one Legislature, the Powers of which shall extend to every Subject of Legislation, and its Laws be supreme & controul the whole, the Idea of Sovereignty in these States must be lost. Indeed I think, upon such a Supposition, those Sovereignties ought to be eradicated from the Mind; for they would be Imperia in Imperio justly deemd a Solecism in Politicks, & they would be highly dangerous, and destructive of the Peace Union and Safety of the Nation. And can this National Legislature be competent to make Laws for the free internal Government of one People, living in Climates so remote and whose “Habits & particular Interests” are and probably always will be so different. Is it to be expected that General Laws can be adapted to the Feelings of the more Eastern and the more Southern Parts of so extensive a Nation? It appears to me difficult if practicable. Hence then may we not look for Discontent, Mistrust, Disaffection to Government and frequent Insurrections, which will require standing Armies to suppress them in one Place & another where they may happen to arise. Or if Laws could be made, adapted to the local Habits, Feelings, Views & Interests of those distant Parts, would they not cause Jealousies of Partiality in Government which would excite Envy and other malignant Passions productive of Wars and fighting. But should we continue distinct sovereign States, confederated for the Purposes of mutual Safety and Happiness, each contributing to the federal Head such a Part of its Sovereignty as would render the Government fully adequate to those Purposes and no more, the People would govern themselves more easily, the Laws of each State being well adapted to its own Genius & Circumstances, and the Liberties of the United States would be more secure than they can be, as I humbly conceive, under the proposed new Constitution. You are sensible, Sir, that the Seeds of Aristocracy began to spring even before the Conclusion of our Struggle for the natural Rights of Men, Seeds which like a Canker Worm lie at the Root of free Governments. So great is the Wickedness of some Men, & the stupid Servility of others, that one would be almost inclined to conclude that Communities cannot be free. The few haughty Families, think They must govern. The Body of the People tamely consent & submit to be their Slaves. This unravels the Mystery of Millions being enslaved by the few!’

2. Notes from Kirsten for you: (the pdf that is referenced will be at the Samuel Adams Web site on Saturday)

– Action Civics is a term that folks should get familiar with. College campuses are being utilized to recruit and train students to take the woke causes with them into the workplace and into K-12 schools if they intend to be teachers. There is an article by Stanley Kurtz which is linked in the attached pdf file that explains more.

– A key report that is also linked in the attached pdf slide file is “Making Citizens: How American Universities Teach Civics” by David Randall of the National Association of Scholars.

So how does Critical Race Theory get embedded in school districts in addition to indoctrinated teachers coming off the college campuses? Here are two links to resources on ‘diversity, inclusion, equity services’.

– Groups that are pushing back on Critical Race Theory

1. Stop Critical Race Theory dot com – This is a great website with links to many articles explaining what CRT is and multiple examples of its implementation across the United States. https://stopcriticalracetheory.com/

2. Protect Ohio Children is tracking incidences of CRT, CSE and SEL in school districts on their heat map on their website. See it here: http://protectohiochildren.net/

4. Coalition to Restore Liberty is on the Free Ohio Now web site

Comments Off on Episode 308: Subversion Of A Nation: CRT