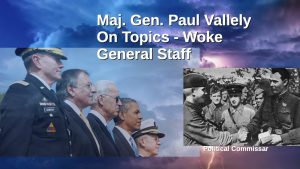 I have the great honor to interview Maj. Gen. Paul Vallely. I prefer that he describes his past and present service to our Republic during the first part of the program. But if don’t know who he is and want to read about him, here is the link to the bio of Maj. Gen. Vallely.

When I proposed a topic to Gen Vallely this is what was on my mind, ‘What is going on with commissars in the military (O’Biden CRT training even into special forces as well as continuing the Obama era cultural revolution in the military)?’

I wanted to dig deep with Gen. Vallely regarding the decades of infiltration of the General/Flag Staff officers that lost the motto of ‘Duty, Honor and County.’ His insight is eye opening and delves into the systemic problem of socialist and communist in academia.

Subversion and Treason at the Top

The General and I discuss the installment of what I called the ‘Woke Political Commissar’s’ into the overall military and specifically into Special forces.

I generally referred to the following articles and Gen. Vallely responded in a manner that causes all to wonder what our military is turning into:

When we look at the vetting of Obama, which removed officers and senior enlisted that were Constitutionally minded. Gen Vallely takes us back to the Clinton days. Yet, I would like you to consider the following since many cannot remember the treason that Clinton did in giving the Chinese our reactor technology, submarine propeller technology and so much other access to classified intellectual property – let’s just look at the subversion of the military by vetting out the ‘not so politically correct.’

You will have to listen to understand the discussion regarding treason.

I could go on with numerous articles showing all the ill effects of the social and political engineering of the military. With having Maj. Gen. Paul Vallely as my guest for this program, I really want to keep this short.

‘… Our military Affairs in the middle Department are in such a Situation as to afford us too much Reason to be chagrind. We have indeed sufferd no shameful Defeats, but a promising Campaign has however ended ingloriously. To what are we to attribute it? I believe to a miserable Set of General Officers. I mean to make some Exceptions. For the Sake of our Country, my dear Friend, let me ask, Is our Army perpetually to be an unanimated one; because there is not Fortitude enough to remove those bad Men. I remember the Factions in Carthage which prevented her making herself the Mistress of the World. We may avoid Factions and yet rid our Army of idle cowardly or drunken officers. HOW was Victory snatchd out of our Hands at German Town! Was not this owing to the same Cause? And Why was only one General officer dischargd? Was it because there were just Grounds to suspect only one? Is there not Reason to fear that our Commander in Chief may one day suffer in his own Character by Means of these worthless Creatures? May he not suffer under the Reputation of an unfortunate Commander, than which I think he cannot suffer a greater Evil. It is difficult to seperate from the Minds of the People the Idea of unfortunate from that of the Want of some necessary soldierly Quality. At best the unfortunate General has Pity only as the Reward of his Services; and how soon does Pity degenerate into Contempt. Cicero if I mistake not some where tells us, that when a General is fortunate it matters not whether it is ascribd to his being a Favorite of the Immortal Gods, or to certain good Qualities in him which others are incapable of observing. His Soldiers will encounter every Danger under his Conduct. His Enemies will be confounded at his Approach. His Country will revere him. The Reverse is equally just. As therefore we regard the Reputation of the Comdr in Chief of our Armies, which is of the greatest Importance to our Affairs, let us promote this Winter a strict Scrutiny into the Causes of this unfortunate Campaign. Our Affairs are far from wearing a desperate Aspect. Our Successes at the Northward must give us Reputation abroad; and Reputation is a Kind of real Strength. That our Men are brave, Brandy Wine & German-town can witness. Let us then give them officers worthy of them, and Heaven will prosper our righteous Cause. There is indeed one thing which to me appears threatning. It is absolutely necessary that the Commissarial Departmt should be restored to a better State, or the Army will soon suffer. This my dear Sir requires your speedy Return to Congress. Did the Army suffer or was it in Danger of suffering before the Alterations in that Department the last Summer, why then should we not put it upon its old Footing & prevail upon the former Commissary, who is the fittest Man I know, to act again in that office. I have been favord with a Letter from Dr Lee since his Return to Paris from Berlin. The Powers of Europe I perceive, are too timid, or too intent upon enslaving others, to espouse the Cause of Liberty in America. No Matter, my Friend. We shall not be obligd to them; and they will hereafter be more sensible of our Importance when they find that we have struggled thro our Difficulties without them. We shall do greater Honor to our Selves and our Cause; and those Liberties for which we pay so dear a Price will be more justly & more highly valued by our selves and our Posterity. France, in my Opinion, misses the Sight of her true Interest in delaying to take a decisive Part. She runs a great Risque; for if Britain should be so politick as to recognize our Independence which she sees us determind at all Hazzards to maintain, and should propose to us a Treaty of Alliance offensive & defensive, would not the flattering Expectations of France be cut off? I mention this, not because I expect or wish for it. But should such Recognition & such Proposals be made the next Spring, which may happen, would France have any Reason to fault America for acceeding to it? We are independent. The Nations of Europe may acknowledge it when they dare to do it. We have Fortitude enough to maintain it. This is our Business. The Nations may reap honest Advantages from it. If they have not Wisdom enough to discern in Season, they will regret their own Blindness hereafter. We will dispose our Favors as we please.’

5. I do not like the Brookings Institute but, this is an interesting paper relative to the discussion: The case for rethinking the politicization of the military