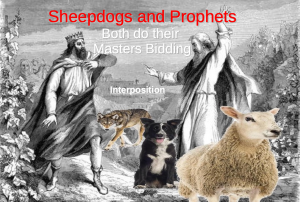 Sheepdogs and Prophets came to me as I finished re-enacting Sam Adams at a Liberty Camp for kids and listening to a couple vblogs (see the References) by Doug Wilson. One of the key learning words at Liberty Camp this year is ‘Sheepdogs.’ The intent is to teach the students, during this week long day camp that they are Patriots that walk among those who meander and follow the whims of life while the wolves which despise our Republic are out to devour our Republic.

While facilitating my two Constitutional Classes this week and catching up on some Doug Wilson vblogs, it hit me that there is a correlation between Sheepdogs and Prophets. Now to the most astute Biblical scholar this comparison might seem nonsensical but, to those of us who take a simple direct approach, it makes perfect sense.

Sheepdogs are not only among the flock to watch over the flock. They do the bidding of the sheep herder without questioning him. Not only that, they are on guard against the wolves. They will fight with all who come to injure or steal and do what they have to protect the sheep. They delight in the appreciation and praise of the sheep herder. Hmmm … interesting allegory.

So what happened to the sheepdogs in the pulpits, in education and in political or cultural affairs in these United States? I’ll discuss this on the program.

Keeping it simple, Prophets didn’t have the first order of business being future tellers or for a number of modern church prophets – fortune tellers. NO, the prophet called out the sins of leaders and the people. They were in the midst of the sheep, I mean people, reminding them of the direction they needed to go to return to truth and the correct path. They also took on the wolves. Jezebel comes to mind especially when I think of her splattered on the ground getting eaten by dogs.

So I bring this into the conversation. Not about Jezebel but regarding those who are really looking at what is going on in the world around us and have been warning for decades as to the truth and correct path to be on. Additionally, not having direct revelation from the mouth of God but by deduction, Biblical principles and reading the past, predicted our present.

Not a Shot Fired

Reviewing this with you again. Yes, I’ve spoken of this writing of Jan Kozak for years. Hmmm… Warning for decades how this was playing out and is now our present reality. Go to the references, download and read it again if you’ve never read it, it is time you do.

Not everyone is a Prophet but there is no call not to be a Sheepdog. We need Sheepdogs and Prophets active right now to turn the tide of the power elite and their sinful drive to the Godless ‘isms. Just a reminder, the ‘isms are: socialism, communism, jihadism, environmentalism, globalism and the list goes on.

With that, what is your reasoning for not being a Sheepdog? With that, if your pastor and church leaders are not being Prophets then what are they doing, programs?

You can turn the tide of the ‘isms when you find your role as Sheepdogs and Prophets.

When you read this consider what the present Federal Government has been and is doing that is a complete violation of our Founding documents and States Constitutions. How long will this be allowed and where are the Sheepdogs and Prophets?

INSTRUCTIONS OF THE TOWN OF BOSTON TO ITS REPRESENTATIVES IN THE GENERAL COURT. SEPTEMBER, 1765. (Writings of Samuel Adams, Volume I, Page 11)

At a Time when the British American Subjects are every where loudly complaining of arbitrary & unconstitutional Innovations, the Town of Boston cannot any longer remain silent, without just Impu tation of inexcuseable Neglect. – – We therefore the Freeholders & other Inhabitants, being legally as sembled in Faneuil Hall, to consider what Steps are necessary for us to take at this alarming Crisis, think it proper to communicate to you our united Sentiments, & to give you our Instruction there upon.

It fills us with very great Concern to find, that Measures have been adopted by the British Ministry, & Acts of Parliament made, which press hard upon our invalueable Rights & Libertys, & tend greatly to distress the Trade of the Province by which we have heretofore been able to contribute so large a Share towards the enriching of the Mother Country. But we are more particularly alarmd & astonishd at the Act, called the Stamp Act, by which a very grievous & we apprehend unconstitutional Tax is to be laid upon the Colony.

By the Royal Charter granted to our Ancestors, the Power of making Laws for our internal Govern ment, & of levying Taxes is vested in the General Assembly: And by the same Charter the Inhabitants of this Province are entitled to all the Rights & Privileges of natural free-born Subjects of Great Britain: The most essential Rights of British Subjects are those of being represented in the same Body which exercises the Power of, levying Taxes upon them, & of having their Property tryed by Jurys : These are the very Pillars of the British Constitution founded in the common Rights of Mankind. It is certain that we were in no Sense represented in the Parliament of Great Britain when this Act of Taxation was made: And it is also certain that this Law admitts of our Propertys being tryd, in Controversys arising from internal Concerns, by Courts of Admiraltry, without a Jury. It follows, that at once, it annihilates the most valueable Privileges of our Charter, deprives us of the most essential Rights of Britons, & greatly weakens the best Security of our Lives Libertys & Estates ; which may hereafter be at the Disposal of Judges, who may be Strangers to us, & perhaps malicious, mercenary, corrupt & oppressive…

Tom N. comment: there is much more meat between the previous and the following summary paragraph. It is your responsibility to take the next paragraph to heart and act as at the foundation.

…We therefore think it our indispensible Duty, in Justice to our Selves & Posterity, as it is our undoubted Priviled, in the most open & unreservd, but decent & repectfull Terms, to declare our greatest Dissatisfaction with this Law: And we think it incumbent upon you by no means to joyn in any publick Measures for countenancing & assisting in the Execution of the same; But to use your best Endeavors in the General Assembly, to have the inherent, unalienable Rights of the People of the Province, asserted & vindicated & left upon the publick Records; that Posterity may never have Reason to charge the present Times, with the Guilt of tamely giving them away….

6. On the Nature of Prophetic Language |Doug Wilson

Comments Off on Episode 310: Sheepdogs and Prophets