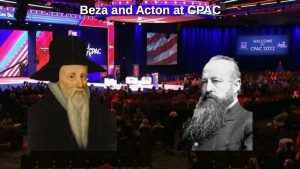 Video available at Rubmle or Brighteon

This week is a journey through time from Beza, Acton and CPAC. I was down hard last week with a sinus infection but CPAC was a great distraction between sneezes, snot and sleep. Since most of you have no idea who Beza is you may think the infection caused some sort of delirium. While Acton is not a household name either except for his quote about ‘doing nothing.’

Just a note on who Beza was and then I want you to take in the two references that I am using for this program. For a more complete simple biography I suggest you follow the link on Monergism concerning Beza. Here is an excerpt:

‘Beza, He succeeded to the high position which Calvin had long held, not only in Geneva, but in the Protestant world; and was, for a period of above forty years after Calvin’s death, the most prominent and influential theologian in the Reformed, as distinguished from the Lutheran, church…

He exerted great influence for a very long period in most of the Reformed churches, and in none more than in that of Scotland. He advised and encouraged our own great Reformer, John Knox, in the whole course of his arduous struggle with the Church of Home,..’

This long dissertation on Beza ultimately discusses the great influence he had in regard to all that was occurring culturally, politically and ecclesiastically during the Reformation. All in all, he and others set the tone for the Christian Resistance to tyrants.

My focus for this weeks program is the first question in Beza’s 1574 work ‘On The Rights Of The Magistrate.’ Simply put for this introduction, If the elected representatives and especially the bureaucrats aren’t God, well, they thinking and believing themselves to be doesn’t make them correct and therefore, they most likely are creating policy, law and rules that are contrary to the God of the Bible. If that is so they are tyrants and despots. Do you obey them ? or … NOT.

Most are aware of a quote from Lord Acton regarding ‘good men doing nothing.’ As written at On Line Liberty Fund regarding John Emerich Edward Dalberg:

‘Lord Acton (1834-1902) was one of the great historians of the Victorian period and one of the greatest classical liberal historians of all time. His theme was “the history of liberty” and even though he was never able to complete his magnum opus of that name he did write numerous essays, book reviews, and lectures. He also was the inspiration behind the multi-volume Cambridge Modern History.’

For this program I focus on the beginning of his work ‘The History of Freedom in Christianity.’ I do not take us far into this work in that the section on Constantine as well as the first couple of pages in enough to compare our modern political leaders in their pursuit to align with Christian in such a manner as he did:

‘…in adopting their faith, intended neither to abandon his predecessor’s scheme of policy nor to renounce the fascinations of arbitrary authority, but to strengthen his throne with the support of a religion which had astonished the world by its power of resistance, and to obtain that support absolutely and without a drawback he fixed the seat of his government in the East, with a patriarch of his own creation.’

The modern humanist religion attempt so meld U.S. constitutionalism’s Christian principles in the patriarchy of Gramsci-ism in the like of, for example, the green new deal. But more so, they are, like Constantine, making themselves equivalent to God in,

‘Constantine declared his own will equivalent to a canon of the Church. According to Justinian, the Roman people had formally transferred to the emperors the entire plentitude of its authority, and, therefore, the Emperor’s pleasure, expressed by edict or by letter, had force of law. Even in the fervent age of its conversion the Empire employed its refined civilisation, the accumulated wisdom of ancient sages, the reasonableness and sublety of Roman law, and the entire inheritance of the Jewish, the Pagan, and the Christian world, to make the Church serve as a gilded crutch of absolutism.’

Therefore, we see the greater majority of churches being willing to kowtow to the pleasures of ‘established government.’ As well as those who are the power elite, either elected or worse bureaucrats, believe they are the remolding of Constantine.

I don’t spend as much time on this Lord Acton topic as I would like to. I will be picking up on this throughout future programs.

CPAC 2022 was again a very interesting compilation of speakers with solid messages yet, I always wonder what the followup will be regarding the word ‘Action’ in there name. Like most conferences or conventions, emotionalism is blended with content. The most difficult challenge is moving the emotionalism to activism.

I was going to give a better summary and a list of my top speakers but I ran out of time in that to me, understanding Beza and Acton were more critical in getting to feet on the street.

I am praying that CPAC will energize the other 80% of folks who read and listen to all the content out in the information ocean. The hope is that these folks are energize to know that they have God given talents that are highly needed in the fight for Liberty.

In the end, CPAC was great for the big dollar entities fighting for Liberty but as Sam Adams always noted, All Politics is local.

I can only encourage you all. Those that are actively doing, be of good cheer because you are doing God’s work. This would be exercising your God given talents to resist tyranny as Beza wrote about.

Those who are soaking up information, learn the history that Acton presents. Let that history be inspiring for you to recognize and exercise your talents locally to begin with.

Lastly, take the energy, wisdom and principles from CPAC speakers and apply them locally.

’WHERE Law ends, (says Mr. Locke) TYRANNY begins, if the Law be transgress’d to anothers harm’: No one I believe will deny the truth of the observa tion, and therefore I again appeal to common sense, whether the act which provides for the quartering and billeting the King s troops, was not TRANSGRESS’D, when the barracks at the Castle WHICH ARE SUFFI CIENT TO CONTAIN MORE than the whole number of soldiers now in this town, were ABSOLUTELY REFUS’D: This I presume cannot be contested. Should any one say that the law is not transgres’d ‘to anothers harm’ the assertion I dare say would contradict the feelings of every sober householder in the town., No man can pretend to say that the peace and good order of the community is so secure with soldiers quartered in the body of a city as without them. Besides, where military power is introduced, military maxims are propagated and adopted, which are inconsistent with and must soon eradicate every idea of civil government. Do we not already find some persons weak enough to believe, that an officer is obliged to obey the orders of his superior, tho it be even AGAINST the law! And let any one consider whether this doc trine does not directly lead even to the setting up that superior officer, whoever he may be, as a tyrant. It is morever to be observ’d that military government and civil, are so different from each other, if not op posite, that they cannot long subsist together. Soldiers are not govern’d properly by the laws of their country, but by a law made for them only: This may in time make them look upon themselves as a body of men different from the rest of the people; and as they and they only have the sword in their hands, they may sooner or later begin to look upon themselves as the LORDS and not the SERVANTS of the people: Instead of enforcing the execution of law, which by the way is far from being the original intent of soldiers, they may refuse to obey it themselves: Nay, they may even make laws for themselves, and enforce them by the power of the sword ! Such instances are not uncommon in history, and they always will happen when troops are put under the direction of an ambitious or a covetous governor ! And if there is any reason for fear that this may be the consequence of a transgression of the act of parliament, it is a transgression not ‘to the harm’ of individuals only, but of THE PUBLICK. It behoves the publick then to be aware of the danger, and like sober men to avail themselves of the remedy of the law, while it is in their power. It is always safe to ADHERE TO THE LAW, and to keep every man of every denomination and character WITHIN ITS BOUNDS Not to do this would be in the highest degree IMPRUDENT: Whenever it becomes a question in prudence, whether we shall make use of legal and constitutional methods to prevent the incroachments of ANY KIND OF POWER, what will it be but to depart from the straight line, to give up the LAW and the CONSTITUTION, which is fixed and stable, and is the collected and long digested sentiment OF THE WHOLE, and to substitute in its room the opinion of individuals, than which nothing can be more uncertain: The sentiments of men in such a case would in all likelihood be as various as their sentiments in religion or anything else; and as there would then be no settled rule for the publick to advert to, the safety of the people would probably be at an end.’

Past Scandals in US History:

I found this site with interesting scandals and international political cabals

Comments Off on Episode 338: Beza, Acton and CPAC