Episode 342: The Extravagance, Irreligion, and Universal Depravity of The Age

The Extravagance, Irreligion, and Universal Depravity of The Age 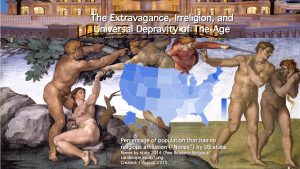 Video of Extravagance, Irreligion and Universal Depravity available at Rumble or Brighteon

Am I talking about the 20th and now the 21st centuries in discussing ‘the extravagance, irreligion, and universal depravity of the age?’ If you have any inkling of a Foundational Biblical worldview, I believe that you would agree that irreligion and universal depravity of the age are militant, scandalous and, if you are a moral person, would say outrageously taboo. On this program I talk about why those who should be the guardians of Liberty, Faith and cultural/civic decency/morality have allowed these encroachments to prevail.

For those who may not listen to the program, the guardians of Liberty fell into the ‘snares, which their artful, insidious Enemies, a few years ago laid for them.’

As always, I do not have the time to take you through all of the details that are the mirrors of history related to our present time. I am going through the letter that Sam wrote to John Scollay in some detail. I also am making a quick comparative of Sam’s ability to live the full perspective of his Puritanism by taking you on a quick dive into Proverbs and Galatians Chapter 5.

I comment on this but you may miss it. Congressman Matt Gaetz enters the Hunter Biden computer hard drive into the Congressional Record. So What? No bid deal.. You ask why I make lite of this? Go read this 1963 entry into the Congressional Record at Marxists.org and then ponder – why do we have the debacles (fiasco, failure, catastrophe, disaster, disintegration, mess, wreck, ruin; downfall, collapse, defeat, rout, overthrow, conquest, trouncing and screwups) in every arena of local, state and national governance as well as the bureaucracies? Also see this Ethan Allen Institute article: 45 COMMUNIST GOALS FROM 58 YEARS AGO.

No Time to Cover These

I wanted to discuss the Character of Samuel Adams and his political theory on Constitutional Republicanism as observed and memorialized by the Marquis De Chastellux in his ‘Travels in North-America, in the years 1780-81-82’ De Chastellux makes this observation of Mr. Adams on pages 389 – 390,

‘In him, I saw a man wrapt up in his object, who never spoke but to give a good opinion of his cause, and a high idea of his country. His simple and frugal exterior, seemed intended as a contrast with the energy and extent of his ideas, which were wholly turned towards the republic, and lost nothing of their warmth by being expressed with method and precision; as an army, marching towards the enemy, bas not a less determined air for observing the laws of tactics. Amongst many facts be cited in honour of his country, I shall relate one which merits to be transmitted to posterity. Two young soldiers bad deserted from the army, and returned to their father’s house. Their father, incensed at this action, loaded them with irons, and conducted them himself to their General, Lord Stirling. He did what every other officer would have done, in his place—pardoned them. The father, a.s patriotic, but less austere than a Roman, was happy to preserve his children; nevertheless he seemed astonished, and approaching the General, ‘My Lord,” says he, with tears in his eyes, “‘Tis more than I hoped for.”—I quitted Mr. Adams with regret, but with a full intention of seeing him again, and my evening terminated by a visit to Colonel Bland, one of the Delegates for Carolina.’

I will have to take up the political theory of Sam Adams as recounted by De Chastallux at some future time. Let me leave you with some quotes from the article in Reference #5 below regarding de Tocqueville that I was going to discuss on the program,

‘Of all political powers, the legislature is the one that most willingly obeys the majority. The Americans have wanted the members of the legislature to be named directly by the people, and for a very short term, in order to force them to submit not only to the general views, but also to the daily passions of their constituents.’

‘In the United States, a custom is spreading more and more that will end by making the guarantees of representative government empty; it happens very frequently that the voters, while naming a deputy, trace a plan of conduct for him and impose on him a certain number of definite obligations from which he cannot deviate in any way. Except for the tumult, it is as if the majority itself deliberated in the public square.’

‘The moral dominion of the majority is based in part on the idea that there is more enlightenment and wisdom in many men combined than in one man alone, more in the number than in the choice of legislators. It is the theory of equality applied to minds. This doctrine attacks the pride of man in its last refuge. Consequently the minority admits it with difficulty and gets used to it only with time. Like all powers, and perhaps more than any other, the power of the majority thus needs to last in order to seem legitimate. When it is beginning to be established, it makes itself obeyed by force; only after living under its laws for a long time do you begin to respect it.

The idea that the right to govern society belongs to the majority because of its enlightenment was carried to the soil of the United States by the first inhabitants. This idea, which alone would be enough to create a free people, has today passed into the mores, and you find it in the least habits of life.’

Sadly, Our legislators and worse the bureaucracies are not adherent to the ‘majority’ but to radical, ideological minorities.

Key points in a Letter to John Scollay

‘…Does it become us to lead the People to such publick Diversions as promote Superfluity of Dress & Ornament, when it is as much as they can bear to support the Expense of cloathing a naked Army? Will Vanity & Levity ever be the Stability of Government, either in States, in Cities, or what, let me hint to you is of the last Importance, in Families? Of what Kind are those Manners, by which, as we are truly informd in a late Speech, “not only the freedom but the very Existence of Republicks is greatly affected?” HOW fruitless is it, to recommend “the adapting the Laws in the most perfect Manner possible, to the Suppression of Idleness Dissipation & Extravagancy,” if such Recommendations are counteracted by the Example of Men of Religion, Influence & publick Station? I meant to consider this Subject in the View of the mere Citizen. But I have mentiond the sacred Word Religion…’ ‘…Do certain Manners tend to quench the Spirit of Religion at one time & are they harmless at another? Are Morals so vague as to be sanctified or dispens’d with by the Authority of different Men?’ ‘…It was asked in the Reign of Charles the 2d of England, HOW shall we turn the Minds of the People from an Attention to their Liberties? The Answer was, by making them extravagant, luxurious, effeminate. Hutchinson advisd the Abridgment of what our People called English Liberties, by the same Means. We shall never subdue them, said Bernard, but by eradicating their Manners & the Principles of their Education. Will the judicious Citizens of Boston be now caught in the Snare, which their artful, insidious Enemies, a few years ago laid for them in vain? Shall we ruin ourselves by the very means, which they pointed out in their Confidential Letters, tho even they did not dare openly to avow them?’ ‘…But Alas! Will men never be free! They will be free no longer than while they remain virtuous. Sidney tells us, there are times when People are not worth saving. Meaning, when they have lost their Virtue.’

” In the days of the Stuarts,” said Samuel Adams, ” it was looked upon by some men as a high degree of profaneness for any subject to inquire into what was called the mysteries of government. James the First thundered his anathema against Dr. Cowell for his daring presumption in treating of those mysteries, and forbade his subjects to read his books or even to keep them in their houses. In those days passive obedience, non-resistance, the divine, hereditary right of kings, and their being accountable to God alone, were doctrines generally taught, believed, and practised. But behold the sudden transition of human affairs ! In the very next reign the people assumed the right of free inquiry into the nature and end of government, and the conduct of those who were intrusted with it. Laud and Strafford were brought to the block, and, after the horrors of a civil war, in which the best blood of the nation was spilt as water upon the ground, they finally called to account, arraigned, adjudged, condemned, and even executed the monarch himself! And for a time held his son and heir in exile. The two sons of Charles the First, after the death of Oliver Cromwell, reigned in their turns ; but, by copying after their father, their administration of government was grievous to their subjects and infamous abroad. Charles the Second, indeed, reigned till he died ; but his brother James was obliged to abdicate the throne, which made room for William the Third and his royal consort Mary, the daughter of the unfortunate James. This was the fate of a race of kings bigoted to the greatest degree to the doctrines of slavery, and regardless of the natural, inherent, divinely hereditary, and indefeasible rights of their subjects.*

1. John Cowell, Master of Trinity Hall and his seditious dictionary – 21 May 2018 by Trinity Hall Cambridge Library

2. The Political and Religious Thought of James I. – 1970 by John Joseph Kerrigan, Loyola University Chicago

3. the Atlantic article: HOW AMERICA LOST ITS MIND, The nation’s current post-truth moment is the ultimate expression of mind-sets that have made America exceptional throughout its history. By Kurt Andersen, SEPTEMBER 2017 ISSUE

5. Alexis de Tocqueville on the Tyranny of the Majority

6. CHAPTER 7: Of the Omnipotence of the Majority in the United States and Its Effects – Volume 1, Part 2, Chapter 7

Past programs dealing with Communist Goals:

Video on Economics I mention in the program

Comments Off on Episode 342: The Extravagance, Irreligion, and Universal Depravity of The Age