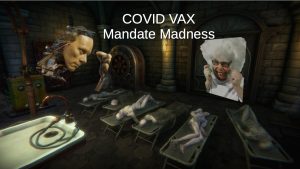 To the Citizens of Ohio who desire genuine medical autonomous rights and to the Ohio Senate who are charged with upholding the Ohio State Constitution:

This article is Time Sensitive since the Ohio Senate intends to hold hearings on H.B. 218 beginning December 7th, 2021. The intent is to have this bill ready for signature before the end of the year so as to slow the actions of all types of corporate entities from forcing vaccine mandates and terminating employees.

I have been asked over the last two months about the Constitutionalism of COVID-19 vaccine Mandates both federally and regarding the Ohio Constitution. The policies of the Biden Administration are indifferent to any Foundational Principles. Reasonable citizens are fed up with the more than eighteen months of attacks on life, liberty, and the pursuit of happiness.

The State of Florida has taken definitive action with a special session of the Legislature which created meaningful legislation that strongly protects the Citizens of Florida. A careful read of those Florida laws1 may resonate with what is happening in Ohio where questions by many across the state are echoing in the clear winter air. Here in Ohio, many thousands of constituents believe their voices are being lost in the blizzard of activity in Columbus. A few legislators are hearing the faint cries for help and want real Constitutional results and are to be commended. However, the majority of even Republican legislators may respond to their constituents, but they have chilled their policy language to echo that of the DeWine establishment corporate donor class.

This storm has been building. The flurry of activity began in April with a strong Ohio Constitutional conservative approach being introduced as House Bill 2482 (H.B. 248), which is permanently stalled in the Ohio House Health Committee. A great majority of the Citizenry wanted the language of H.B. 248 to be made even stronger to force mandates out of Ohio completely. But the cauldron of differing political ideologies among Republicans left the bill to die in committee.

Then the DeWine loyalist, moderate and liberal Republicans, came up with House Bill 4353 (H.B. 435). This bill was, in fact, moved through and advanced by the House committee with virtually no public hearings. It was full of language giving corporate entities greater power than the Citizenry. It became a battle-line for Constitutional Conservative Citizens. The effort to stop this bill by the Citizenry worked and, although the bill came out of committee, it was pulled. The report from the proponents of the bill said it was because differences in the Republican caucus could not be overcome. Burn into your memory as you consider the candidates in next years primary, that the differences of ideology in the Republican caucus are really the issue at hand. I will define this issue as Constitutionalism vs. politicism.

With that background, antennas should be up regarding the substitute bill. The public’s radar should not be looking for Santa’s Sleigh but for the Martian invasion of Orwellian design, being the leftist Democrats who did not vote for H.B. 218 and the middle-of-the-road Republicans. The Citizenry is rightfully wondering how House Bill 218 (H.B. 218) is now to be the Ohio Mandate Medical Freedom Bill? I was fortunate that a strong Constitutional Conservative Legislator took the time to converse with me, share the process of passing H.B. 218 in the House, to provide me with insights, and even their personal concerns with H.B. 218 as it has been passed.

What are the confusions and Citizen continuing concerns with H. B. 218?

Taking the full measure of the political climate in Ohio into full consideration, we have all suffered in one way or another from the travesties of the last eighteen months respecting COVID-19. The federal government has taken draconian measures in dealing with this medical issue. Mr. DeWine has followed suit with the leftists in his administration and the despotic measures of both the Federal and Ohio State bureaucracies. These measures have been in harmony as to policies that are one-sided regarding the pseudo-science of this major flu. Since April, ‘Mandate Madness’ became the psychosis of federal, state, and local government, large corporatist business, higher education, and all who refuse the reality of the substantial global material science over the ideologically driven pseudo-science.

Bottom line: By mid-summer people were losing their jobs, being castigated, and emotionally and physically assaulted for not wanting to submit to the mandates affecting their lives. So, in Ohio, what I will call ‘The Bill Drill Duo’ of H.B. 248 and H.B. 435 functioned as attempts to address the ‘Mandate Madness’ and hit bedrock. The realities are that, as is seen in the conundrum of the Ohio Republican Party Leadership, the Ohio Legislature is representative of that vexed question: “What does it mean to be a Constitutional Conservative, a pseudo-conservative Republican, or a liberal/leftist Republican?”

In the end, how does the Ohio House get enough Republican votes to seemingly deal with the ‘Mandates Madness’ so that the legislation will be veto-proof. Hence, House Bill 218.

H.B. 218, originally began the process titled, “Extend bar hours; exempt bars from statewide curfew.4” H.B. 218 was changed in its entirety and purpose; then immediately passed by the House. Both the process and the language are the concerns of many. Even after talking with the Constitutional Conservative Legislator, this writer has many concerns mirroring those of many other Citizens.

As I mentioned earlier, I was able to gain insight into the process and clear the steam from the boiling cauldron of political positioning regarding H.B. 218. So, let us take the dive into where things stand as the Ohio Senate must now take up this matter, and for my part, must make H.B. 218 only a starting point for a real Constitutional Bill that rejects the ‘Mandates Madness.’

What I learned about H.B. 218 from the perspective of a Constitutionally minded Legislator:

In consideration of my conversation notes with the Constitutional Legislator, I have a great concern that is shared by many Citizens who understand our Ohio Constitutional fundamental rights and who have taken a strong position against all mandates related to the COVID-19 vaccinations. Many of Ohio’s politically active Citizenry are concerned that House Bill 218 is an overreach by the vote-constrained Legislature wanting to do ‘something’ regarding the coming federal mandates. Several questions remain:

Next, there must be clarification of the Republican political leadership in Ohio. A potential scenario is that, based on the draconian actions of Mr. DeWine in every nuance of the COVID flu, the Citizenry can only believe a supposition that he and the corporate lobbyists had great influence in the development of H.B. 435, and through those loyal to his left-leaning ideologies, could have influenced the decision to use H.B. 218 as the mechanism for allowing eventual mandates for the named corporations going forward. No, this writer was not in the kitchen where all of the political ingredients were placed in the black cauldron of legislative black magic deals. But, I do know from speaking with the Constitutional Conservative Legislator that, as I mentioned before, there are a large number of Republicans in the Ohio Legislature that wanted, and in my interpretation of the conversation, were gleefully satisfied that the mandates and special powers granted to the corporations named in H.B. 218 were kept in the version passed by the House.

From the history and track record of H.B. 435, it does allow the imagination to contrive the scene at the cauldron. What if the Ohio Republican Party (ORP) Leadership pressured the House Leadership into enacting H.B. 218 so that Mr. DeWine could look to some as if he was ‘doing something’ as a positive for his reelection bid? But recent convulsions of the ORP at its last meeting, with its cauldron foaming, is a story for another day.

Now, considering who benefits from the ‘special corporate powers and authorities’ granted in H.B. 218, one only needs to read the language to allow that imagination to consider where the lobbyists for the Corporatists, including higher education, insurance companies, the medical industry, and other special interests, had input. These lobbyists and Corporatists must have supplied their knowledge in assisting the construct of the original and failed H.B. 435. Then much of the verbiage from H.B. 435 was strategically substituted into the language of H.B. 218 so that something could be passed before the end of the year. The questions must continue in respect to wondering what the House considered before passing this bill. More importantly, at this point, will the Ohio Senate consider the Rights of the Citizens over the corporations as they are also fast-tracking this legislation?

At this point, I have to commend the few Constitutional Conservative Legislators in the House for trying to pour water on the fire of the boiling cauldron of H.B. 218. The bill, if one can tolerate reading it, can be useful for the moment as it opposes mandates for vaccines under emergence use authorization, but clearly surrenders the Constitutional Rights of the Ohio Citizen with any future approval actions from the FDA. And, as previously mentioned, the sunset clause is very problematic.

Here is a final series of questions for you the Citizenry and the Ohio Senate:

It would be amazing and far less convoluted if the Ohio Senate revised H.B. 218 to be simple language that codified the various Federal District Court Injunctions. The way that H.B. 218 modifies the existing Ohio Revised Code does give even more tort exemptions to corporations and especially medical service providers choosing not to provide services for those not being vaccinated.

Hoping that the Ohio Senate has the courage to keep the legislation short and to the point in rejecting all mandates and penalizing any who force mandates, allows the Citizenry to maintain all of their Constitutional Rights.

The Senate must include ‘bodily autonomy’ and ‘natural immunity’ in their version of the bill. Following a revision that would eliminate the special powers given to the corporate groups discussed here, Article XIII of the Ohio Constitution would not be violated since all types and instances of allowed corporate activity in Ohio would be held accountable if they implemented any form of forced vaccination. The Ohio Senate must adopt simple language from the Florida Special Session legislation that imposes penalties on the corporations in Ohio for any form of forced medical violations of ‘bodily autonomy.’

Now it is up to the Citizenry who are concerned about their liberties, especially their medical liberty, to contact their State Senator regarding H.B. 218. There are only two options for the Ohio Senate: kill H.B. 218 or revise it as mentioned in the above paragraph.

The Call to Action is: Make the calls and send the emails. Do all that you can to stop corporations from having special rights and authority that are greater than your God-given Rights secured in Article I of the Ohio Constitution.