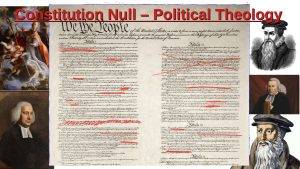 Is it shocking that I say the Constitution Null? In the first instance of Webster’s 1828 Dictionary the definition is ‘To annul; to deprive of validity; to destroy.’ Modern online dictionaries define null as ‘having no legal or binding force; invalid.’ What is happening with the modern bureaucracies at all levels is that the Constitution has no ‘binding force.’ Even the Courts act by their political theology and not by the original intent concept of Constitutionalism.

There are two clear points that I am talking about on this weeks program as I close the year dealing with Political Theology. Just a reminder of the definition of political theology: ‘is often used to denote religious thought about political principled questions.’ as well as ‘used in discussion of the ways in which theological concepts or ways of thinking relate to politics.’ the quotes from Wikipedia contributors, “Political theology,” Wikipedia, The Free Encyclopedia, https://en.wikipedia.org/w/index.php?title=Political_theology&oldid=1047705690 (accessed December 2, 2021).

I know, here I go again on the Political Theology highway. Well if you have not figured it out, politics is now more theology than any of the blabber from talking heads, Phd’s, bureaucrats or so called politicians and political experts. More important is that all those who I mentioned are taking their theological positions and communicating them into every aspect of society and doing it every day. They are living their religions out in the open and making policy based on their beliefs.

Let me ask this, Is it not so that the ‘social justice’ movement, critical race theory, critical social justice, environmentalism, just the science, gospel only evangelicalism, major denominational theology and all the forms of isms; are religions based on their underlying theologies?

The fact is that the political theology is not being heard but in a few pulpits in our present time. This is unlike the Foundation of the nation. More in a minute.

How is the Constitution Null?

I’m going to keep is short and sweet here. As most of you are, you open your eyes every day and hear or see that the every level of bureaucracies cancel out the foundational principles of constitutionalism. Then you hear and read that the your state and local politicians are doing the same with your State Constitutions by passing laws or ordinances.

Worse, is that when you exercise you right to redress, you are ignored, talked down to, castigated, called names and even assaulted with legal proceedings; as with the police arresting parents at school board meetings.

Now, the assault on your person is taken a new form. That of ChicomFlu vax mandates.

My primary reference for this week is the 1928 book ‘The New England Clergy And The American Revolution’ By Alice M. Baldwin.

In my preparation to lead an Ohio Constitution Study Group the following quote brought me back to the need to finish the year on the theme of Political Theology.

‘The New Testament is the moral constitution of modern society.’

This statement is the last point in the Webster 1828 Dictionary’s definition of a Constitution. It is no longer true nor has it been true for over 100 years in our modern society.

As I have mentioned in a number of former programs that touch on the moral degradation of our ‘modern society’ from the pulpits. Consider reviewing the programs Here, Here and Here. I also highly recommend this well articulated blog post considering our ‘modern society’ by Doug Wilson – it may be more honest than what you want to hear but I’ll say what needs to be said first: Don’t be a coward and not watch this because you don’t like Doug, you will need true courage very soon to deal with the next eighteen months.

I am going to be very pointed once again, I don’t have the suave articulation of many. My Dad as a former semi-pro boxer always taught me to hit hard to gain the opponents attention. So with that, pure political activism is not going to make a single lasting gain.

The enemies of true Liberty are charming, confident and elegant. They are working the Gramsci model of marxism to the maximum. They have captured education, government bureaucracies at every level and are instantiated in every form of religion, including the normalized evangelical and sadly, some orthodox religions. There is such a thing as Christian Marxism but you can go research that.

I have been actively attempting to engage pastors and church leader in returning to the Principles of Orthodox Reformation truth for over 40 years. I am sad to report that Doug in his podcast referenced above hits hard as well and that from my point of view, we are at this point because the arrogant floppy theology that dominates our so called Christian denominations and worse, the non-denominational, such that all are fertilizing the fields with spring grass cow dung instead of the full Reformation Gospel of our Founding era. With that:

Some quotes from Alice Baldwin:

‘One factor which was recognized by contemporary writers as especially significant but which, until recent years, has been touched but lightly by later authors is the religious. Men of the time asserted that the dissenting clergy and especially the Puritan clergy of New England were among the chief agitators of the Revolution and, after it began, among the most zealous and successful in keeping it alive.’

‘J. T. Adams in his first two volumes on New England history are especially notable for their emphasis upon the significance of the religious factor and the work of the clergy… Adams, although he gives great weight to the clergy, especially during the seventeenth century, does not recognize sufficiently the part they played in teaching political theory to the people both before and after 1763 and in giving to the theories religious sanction, nor does he emphasize sufficiently the bearing of the ecclesiastical quarrels and religious movements of the eighteenth century upon the development of a spirit of independence, a love of liberty, and the use of arguments with which to support it.’

My emphasis in bold

‘In short, the intimate relation of the New England minister to the thought and life of eighteenth-century New England has never been adequately developed. That is the purpose of this study: first, to make clear the similarity, the identity of Puritan theology and fundamental political thought; second, to show how the New England clergy preserved, extended, and popularized the essential doctrines of political philosophy, thus making familiar to every church-going New Englander long before 1763 not only the doctrines of natural right, the social contract, and the right of resistance but also the fundamental principle of American constitutional law, that government, like its citizens, is bounded by law and when it transcends its authority it acts illegally. The author believes that here can be traced a direct line of descent from seventeenth-century philosophy to the doctrines underlying the American Revolution and the making of written constitutions. It is hoped that the study may explain, in some measure, why these theories were so widely held, so dearly cherished, and so deeply inwrought into American constitutional doctrine. And, finally, an attempt is made to present, in some detail, the activities of the clergy in the events of the Revolution and in establishing the institutions of the new-born states.’

Let me finish with this, the first full chapter of the reference book is ‘The Eighteenth-century Minister , His Power and His Learning.’ Well, the ministers of our time still have a lot of power. That is seen in the ‘wokeness’ coming from many church leaders as well as in their false, non-Reformation, teaching of Romans 13 and Hebrews 13.

In my simple perspective it is being a part of a congregation that has a pastor and ministerial staff as those written about in ‘The New England Clergy And The American Revolution’ By Alice M. Baldwin. Until we have the Reformation Revival at the pulpits, your political action is useful but will continue to be limited in longevity of success.

To been seen in this Nullifying the Constitution Null will be how the Federal Judges appointed by President Trump will hold to being ‘Originalists’ in judicial theory and application. As a friend said the other night, ‘To retain our Rights we will have to litigate for them.’ At this point in time, it will be the pulpits and the bench that will have to lead in the fight for Constitutionalism and Liberty.

Several pressing issues to consider Constitutionally, either by your State and or Federal Constitutions:

(b) New Florida laws thwart vaccine mandates. Here’s how they affect you.

2. Fifteen State Treasurers Threaten to Defund Wall Street: Their solution is THE solution to America’s Decline and the Rise of Totalitarianism

3. The World Health Organization (W.H.O.) on Monday convened its second “special session” in 73 years to draft a global pandemic treaty.

I think that you need to dig into the Alice Baldwin book because it sets the history of Sam Adams’ Political Theology.

1. Noted above in the text.