Video Of ‘Quantitative Reset or Biblical Calvinism Again?’ available at Rumble or Youtube.

This second week on Economics, I address the question of ‘Quantitative Reset or Biblical Calvinism Again?’ – as the means within Christian Nationalism. I will take you 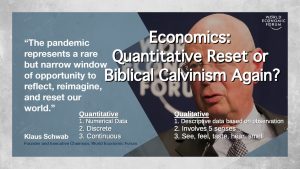 through the background of the Rise of Scottish Capitalism via Calvinism. (see the References for the link to the paper by Karen Brown.) I will delve into ‘The Introduction to Christian Economics’ toward the end of the second segment and into the third.

Let me put it to you simply, there is nothing new here scientifically or philosophically, but due to scrambled egg theology since the mid-1800’s, Christians have left dealing with society and economy to the pseudo-christian and non-believers. Hence I want to rattle cages and add to the awakening of Foundational solutions.

Therefore, As we know and have seen in our recent history, the meaning of words change either by popular use or purposefully for agenda driven reasons. To this point, I ask you to go to the Definitions at the end of the Newsletter where I give you the Websters 1828 definitions of quantitative and reset. Just an interesting note, reset in 1828 means ‘In Scots law, the receiving and harboring of an outlaw or a criminal.’ Think about that when you hear or read about the ‘Great Reset.’

Now lastly, I reintroduce the culprits Cloward and Piven, planners of the Quantitative Reset, i.e. systematic crashing the US economy.

You will hear again that although Monica Crowley in a very recent interview (see in References) seemingly reveals the ‘Wow Factor’ of a planned economic collapse of every system, the fact is that Cloward and Piven designed and had it implemented since the ‘60s. Do look at the References regarding public education coming unraveled with illegals as a continuation of the collapse of the systems in the US. (See Reference #10 on cost of illegals)

Let me begin with these quotes from a more modern thinker and theologian:

“Only a true faith that applies God’s Word to everything including economics – will lead to the revival and reformation our culture needs so badly.” — R.C. Sproul

“Economics for Everybody’ begins with understanding God’s principles for organizing His creation and what that means for us as creatures and stewards.” – R. C. Sproul

Now, as I scratch the surface of the book ‘The Introduction to Christian Economics,’ written in 1974, I have to open with this quote:

‘…Christians have been in retreat from the realm of economic reconstruction, in theory and in practice, since the closing years of the seventeenth century. If nobody but confessing Christians were returned to Congress next year, it is unlikely that the economic advisors would change or that the legislation would be fundamentally reversed. In fact, the Christian would be wiser to vote for any number of atheists than for some of the neo-evangelical economic interventionists, who are, sadly, already in Congress! Christian economics is more than a ‘right attitude’ held by the economist as he works out his model for an operating system of price and wage controls. It is more than a ‘cosmonomic orientation’ when voting for another federal welfare program.’ – Dr. Gary North

In the Definitions further in down, we learn that quantitative must refer to ‘quantity’ and that:

‘This definition is defective, and as applicable to many other properties as to quantity A definition strictly philosophical cannot be given.’

This takes us back into the workings of Cloward and Piven as well as the first two principles that are, a prioria, of Christian – Biblical Economics. These are taken from page 7 of the book:

First: ‘God has cursed the earth (Gen. 3:17-19) To which, ‘the earth no longer gives up her fruits automatically. Man must sweat to eat. As the Apostle Paul wrote, ‘if any would not work, neither should he eat’ (II Thess. 3:10)

Second: natural scarcity, ‘All of the speculation of marxist economists will not find a way for the post-revolution utopian world to avoid the curse of scarcity imposed by the first principle, and none of the government welfare schemes of professional welfare economists will escape the ethical limits of the second.’

Time runs it course and in this weeks program I will run out of it for this discussion on Biblical Calvinism in economics. I will carry this forward into the remainder of the month. The question will remain as to which ultimately prevails when it comes to Economics: Quantitative Reset or Biblical Calvinism Again?

This week, other Anti-federalists have statements on Commerce. This was the operative term for economics during the Founding Era. Commerce is bold and italic for emphasis.

1. Agrippa – Unrestricted Power Over Commerce Should not be Given the National Government, December 1787

‘The common conclusion from this reasoning is an exceedingly unfair one, that we must then separate, and form distinct confederacies. This would be true if there was no principle to substitute in the room of power. Fortunately there is one. This is commerce. All the states have local advantages, and in a considerable degree separate interests. They are, therefore, in a situation to supply each other’s wants. Carolina, for instance, is inhabited by planters, while the Massachusetts is more engaged in commerce and manufactures. Congress has the power of deciding their differences. The most friendly intercourse may therefore be established between them. A diversity of produce, wants and interests, produces commerce, and commerce, where there is a common, equal and moderate authority to preside, produces friendship.

The same principles apply to the connection with the new settlers in the west. Many supplies they want, for which they must look to the older settlements, and the greatness of their crops enables them to make payments. Here, then, we have a bond of union which applies to all parts of the empire, and would continue to operate if the empire comprehended all America.’

‘It was not until sometime after peace and a glorious independence had been established that defects were discovered in that system of federal government which had procured to us those blessings. It was then perceived that the Articles of Confederation were inadequate to the purposes of the union; and it was particularly suggested as necessary to vest in congress the further power of exclusively regulating the commerce of the United States, as well to enable us, by a system more uniform, to counteract the policy of foreign nations, as for other important reasons.’

‘We have frequently endeavored to effect in our respective states, the happy discrimination which pervades this system; but finding we could not bring the states into it individually, we have determined … and have taken pains to leave the legislature of each free and independent state, as they now call themselves, in such a situation that they will eventually be absorbed by our grand continental vortex, or dwindle into petty corporations, and have power over little else than yoaking hogs or determining the width of cart wheels. But (aware that an intention to annihilate state legislatures, would be objected to our favorite scheme) we have made their existence (as a board of electors) necessary to ours. This furnishes us and our advocates with a fine answer to any clamors that may be raised on this subject. We have so interwoven continental and state legislatures that they cannot exist separately; whereas we in truth only leave them the power of electing us, for what can a provincial legislature do when we possess the exclusive regulation of external and internal commerce, excise, duties, imposts, post-offices and roads; when we and we alone, have the power to wage war, make peace, coin money (if we can get bullion) if not, borrow money, organize the militia and call them forth to execute our decrees, and crush insurrections assisted by a noble body of veterans subject to our nod, which we have the power of raising and keeping even in the time of peace. What have we to fear from state legislatures or even from states, when we are armed with such powers, with a president at our head? (A name we thought proper to adopt in conformity to the prejudices of a silly people who are so foolishly fond of a Republican government, that we were obliged to accommodate in names and forms to them, in order more effectually to secure the substance of our proposed plan; but we all know that Cromwell was a King, with the title of Protector). I repeat it, what have we to fear armed with such powers, with a president at our head who is captain- general of the army, navy and militia of the United States, who can make and unmake treaties, appoint and commission ambassadors and other ministers, who can grant or refuse reprieves or pardons, who can make judges of the supreme and other continental courts— in short, who will be the source, the fountain of honor, profit and power, whose influence like the rays of the sun, will diffuse itself far and wide, will exhale all democratical vapors and break the clouds of popular insurrection?’

1. Calvinism and the Rise of Capitalism in Scotland, by Karen Brown, University of Northern Iowa

3. Exclusive — Monica Crowley: ‘Economic Collapse’ Is ‘All by Design’

4. Cloward and Piven, the strategy to collapse our economy – Troubled Corinthian

10. FAIR Reveals that Illegal Aliens Released Into the U.S. Under Biden Will Cost American Taxpayers an Additional $20.4 Billion Annually

QUAN’TITY, noun [Latin quantitas, from quantus, how much, or as much as.]

1. That property of any thing which may be increased or diminished.

This definition is defective, and as applicable to many other properties as to quantity A definition strictly philosophical cannot be given. In common usage, quantity is a mass or collection of matter of indeterminate dimensions, but consisting of particles which cannot be distinguished, or which are not customarily distinguished, or which are considered in the aggregate. Thus we say, a quantity of earth, a quantity of water, a quantity of air, of light, of heat, of iron, of wood, of timber, of corn, of paper. But we do not say, a quantity of men, or of horses, or of houses; for as these are considered as separate individuals or beings, we call an assemblage of them, a number of multitude.

2. An indefinite extent of space.

If I were sawed into quantities. [Not in use.]

5. In mathematics, any thing which can be multiplied, divided or measured.

6. In grammar, the measure of a syllable; that which determines the time in which it is pronounced.

7. In logic, a category, universal, or predicament; a general conception.

8. In music, the relative duration of a note or syllable.

Quantity of matter, in a body, is the measure arising from the joint consideration of its magnitude and density.

Quantity of motion, in a body, is the measure arising from the joint consideration of its quantity of matter and its velocity.

(noun) In Scots law, the receiving and harboring of an outlaw or a criminal.