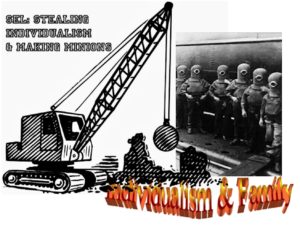 I am re-running this program from December of 2018 since we now have the SEL full press. For Podcast See SEL: Stealing Individualism and Making Minions. States are codifying SEL making it the heart of education and very few have done anything to understand the damage it has done and is doing to families and the students. This program takes you back to 2018 when parents had even more opportunity to fight for their child’s freedom from being turned into a minion.

Now that we see the SEL full press fully activated by legislation in Ohio, I want you to hear again what I and my guest, Adam Retych, talked abut almost four years ago. Adam was a researcher in educational policy at that time. He was focussed on SEL: Social and Emotional Learning. This is a critical topic in that it can still be defunded. SEL has not been dealt with by parents, conservative Citizens and Christians who have children in government schools. Now, in 2022 we are seeing the SEL full press of the ‘state’ or ‘statism’ determining the mental health of students and defining the uniformity of social and emotional norms.

Adam and I discuss what insidiousness this is. The definition and standards sound good but the discerning ear can cut to the chase. Adam’s research is extensive in particular for Ohio yet this is impacting almost every State in the nation.

Contact me if you would like to get more information via Adam. The key information links regarding SEL are in the References section below.

I open the program with Just a quick comment from Melancton Smith’s writing on June 25th. He was one of the original Anti-federalists to argue that Congress in general and the Senate in particular would see corruption to the extent that the Citizenry would accept the corruption because they were bribed with their own money. Talk about recognizing ‘Pay to Gain Votes’.

My thoughts, which are still developing regarding solutions, begin once again with the fact that behavioral and moral modification is being imposed, from birth to death, by those incapable of presenting any norms of morality. Throwing billions of dollars at mental heath and social emotional learning is Not are replacement for God’s basics of Biblical morality. Statism is not the Biblical Living God :: hence the state is incapable of guiding morality, behavior and social norms.

This issue of moral determination by the state is not anything new; As President of Princeton, a Pastor, a Signer of The Declaration of Independence and then a Congressman: John Witherspoon lectured on a Moral Society. Some of what he said in this lecture is:

“The belief of a divine being is certainly either innate and necessary, or has been handed down from the first man, and can now be well supported by the clearest reason. And our relation to him (being Jesus Christ) not only lays the foundation of many moral sentiments and duties, but completes the idea of morality and law, by subjecting us to him, and teaching us to conceive of him, not only as our Maker, preserver and benefactor, but as our righteous governor and supreme judge. As the being and perfections of God are irrefragably established, the obligation of duty must ultimately rest here.”

And regarding that duty:

“Political law is the authority of any society stamped upon moral duty. The first thing to be considered, in order to see upon what principles society is formed, is the state immediately previous to the social state.”

I mention these quotes in relationship that the Pulpits have exited society, culture and politics to the extent that immorality and statism is filling the gap. In our Republic, morality will be legislated and forced into every aspect of life. The final question to you is: “Which and Whose Morality?”

2. Committee For Children: “What is SEL?”

7. The Heartland Institute article: EMOTIONAL LEARNING WILL BE THE DOWNFALL OF SOCIETY

8. The Heartland Institute: 97 article regarding SEL.

Comments Off on SEL Full Press