Stand alarm’d, O ye Americans! An ORATION upon the BEAUTIES of LIBERTY 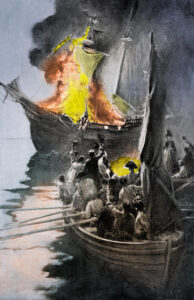 An ORATION upon the BEAUTIES of LIBERTY;

Or, The Essential RIGHTS of the AMERICANS

A call to ‘Stand alarm’d, O ye Americans!‘ Is a sermon that can be seen directly applicable to our 21st century political leaders and situation with one caveat – In 1772, America, the Citizenry and a good portion of the political class, heard and maybe even understood the truth within the First Great Awakening.

The principles in the sermon should have been preached from 1772 each and every year to this very day. The BEAUTIES of LIBERTY are not imaginary but established in the reality of who King Jesus is not king James or a governor, president, congress, judges or bureaucrats.

This sermon is directed to the political elite, the political class, the king, Parliament and yes, the Citizenry. I believe that every politician and bureaucrat needs to hear this sermon since they are culpable in the charges laid forth in this sermon. BTW, the fundamental complaint and charges are timeless when evil reigns.

Another interesting point for modern day Baptist is that Rev. Allen is a ‘Calvinist-Baptist theologian.’ In modern parlay that would mean he is a Reformed-Baptist. Now there are a lot of ‘woke’ Baptists out there as well as other ‘christians.’ Lewis might have had some troubled waters in his maturation as noted by Dr. Concannon but, he matured.

Lastly, although the sermon is a response to the HMS Gaspee incident, the percolation of tyrannies from 1765 through 1772 is best put in context to the preaching from 1730 through the time of this sermon…..and beyond.

I will be doing the present analysis of the Oration and Sermon on my Saturday January 16, 2021 program.

Also, as a suggestion for a solid perspective of recent events with solid direction, I highly recommend this blog post by Doug Wilson – The Gods of Civil Unrest and Jesus Mobs

The Reverend John Allen was a rather strange individual, that happened to write some of the most influential discourses on American liberties in the period just prior to the Revolutionary War. He earned an early reputation in Great Britain as a Calvinist-Baptist theologian with his publishing in the Royal Spiritual Magazine in 1752. He is next found to have been a minister in Salisbury, England, and in 1764 he assumed the role as pastor of the Particular Baptist Church in London. The Particular Baptists, remain to this day, a specific sect within the Baptist lines that hold to a Calvinist theology of predestination. His side-line drapery business went bankrupt and he was confined in a debtor’s prison for a short time. He is next noted to have been dismissed from a post at a Broadstairs congregation “for bad behaviour.” [11] Returning to London in 1768, he taught school for a period before being arrested for forgery in 1769.

In 1770, Allen wrote the “Spirit of Liberty” [1b2], an influential defense of both the Baptist religion and of American sympathizer, John Wilkes, who had recently been deposed from Parliament [23]. Realizing the necessity of leaving behind his spotted past, he wrote the piece under the pen name of ‘Junius, junior’. (‘Junius’ [the elder] was a political essayist of the time whose “letters in the Public Advertiser made” Prime Minister Grafton (1768-1770) “and his administration the butt of fierce political satire”[34].) Ultimately Allen could not escape his reputation and left for America where he landed in New York He subsequently found his way to Boston where by 1772 he was invited to preach at the Second Baptist Church. In 1774, Allen moved to New Hampshire where he died in obscurity c1785-1788. He was heralded as “New England’s Tom Paine” by historians noting his influence on Revolutionary thinking.[45] Paine, of course, was the author of the very popular Common Sense.

The “Oration on the Beauties of Liberty” was initially a sermon Allen preached to the Second Baptist Church in Boston Dec. 3, 1772, and which later was printed as a popular pamphlet in several editions and in several cities (4 in Boston, MA; 3 in New London, CT; and one in Wilmington, DE as of 1775). It appears to have two distinct sections; the sermon as delivered (pages iii-xiv) followed by a second portion (pages 15-31) which was probably written after realizing the great reception by Bostonians to his spoken sermon. This second section appears to be a separate letter composed by Allen to Lord Dartmouth, and is notable in that the page numbers are in Arabic, rather than the Roman numerals of the sermon itself.. Whether the letter was actually sent to Lord Dartmouth personally is unknown. According to Bradley, the complete text of “An Oration on the Beauties of Liberty” did not appear in the first editions of the printing, but were only added into the fourth and fifth Boston editions. [56]

The publication “fast becomes the sixth-best-selling pamphlet in the colonies prior to the publication of the Declaration of Independence. It is a spirited defense of the rights of the American people. The American Alarm (1773) and The Watchman’s Alarm (1774), rousing polemical works on behalf of independence, would follow.” [67] Sandoz relates that “A strong admixture of political theory and theology had by then become customary for Boston congregations, but it was less usual in Baptist churches; by any standard Allen was radical for the time.” [78]

That Allen’s “Oration” was both popular and influential there can be no doubt. William Leslie points out that, “The sermon answered directly Lord Dartmouth’s letter to Governor Wanton which was, much to the chagrin of its author, edited and published in Boston soon after Wanton had received it.” [p250] [89] One of the commissioners in the Gaspee investigation, New Jersey Chief Justice Frederick Smythe, stated less than two months after the sermon, that this “Seditious preacher harrangned [sic] his congregation, by means of which the alarm was effectually given, and the utmost horror excited in the minds of the people against the means intended to be taken by Government in the cause of Public Justice.” [910] By May, 1773, John Adams gave testimony into his diary of the furor created by Allen; “Coll. Otis reads to large Circles of the common People, Allens Oration on the Beauties of Liberty and recommends it as an excellent Production.” [1011] The reference is, of course, to James Otis, the revolutionary thinker and Son of Liberty.

Allen’s “Oration” is likely to have influenced political thinking at the critical time when the Committees of Correspondence were forming in direct reaction to both the Gaspee Affair and the subsequent, but unrelated, attempt by the British ministry to pay the salaries of Massachusetts colonial judges directly from the treasury. Both of these events were considered by Allen to be deliberate and threatening attempts on American liberties, and both were cited by Thomas Jefferson as the key reasons members of the Virginia House of Burgesses met to form the first intercolonial Committee of Correspondence in March of 1773. [1112] Leslie states, “The importance of these two arguments thus linked together is difficult to exaggerate not only because they were widely disseminated but also because only here is there to be found a complete resolution of the basic conflict of laws and jurisdictions inherent in the Gaspee affair.” [p251] [1213]

“An Oration on the Beauties of Liberty” has been previously, and erroneously, attributed to New Jersey preacher Isaac Skillman. This famous pamphlet is still widely known for its arguments against taxation, and to this day, its anti-taxation comments are frequently quoted by websites devoted to such an agenda. The pamphlet is also frequently cited in historical research on American attitudes about slavery, but we such citations relate only to editions published subsequently where Allen added in an anti-slavery diatribe. Allen could not get his first publishers in Boston to include the anti-slavery language. Nowhere in the first three editions of “Orations” does Allen allude to the injustice of enslaved blacks. Rather, he cites the oppression by the English government on Americans, and in fact, notes with disdain that some Gaspee raiders were identified based on “the accusations of a negro.”[p27]

It is noteworthy that Bernard Bailyn made extensive references to Allen’s “Oration” in his 1968 Pulitzer Prize winning The Ideological Origins of the American Revolution. [1314] Inexplicably, many historians have chosen to ignore the main premise of the “Oration” that was written wholly in reaction to the Gaspee Affair.

Other References regarding Rev. John Allen:

1. The Oration and Sermon

2 For some quotations from Allen’s “Spirit of Liberty” see Thompson, William: “Triumphs of Truth”, 1825, on-line at http://www.olpbc.com/Library/Thompson/Triumphs/CH11.htm

4A Web of English History: “The ministry of Augustus Henry Fitzroy, third Duke of Grafton October 1768 – January 1770” On-line at <http://www.historyhome.co.uk/c-eight/ministry/graftmin.htm> Visited May 2005

6Bradley, Patricia. Slavery, Propaganda, and the American Revolution. Jackson, MS: University Press of Mississippi, 1998 (on-line for a charge at <www.questia.com>

10Frederick Smythe to Lord Dartmouth, New York, February 8. 1773, Gaspee Papers, Rhode Island Historical Society. We have not read this letter ourselves; it is quoted in Leslie, “The Gaspee Affair..” (see citation 8 above).

Comments Off on Stand alarm’d, O ye Americans! An ORATION upon the BEAUTIES of LIBERTY