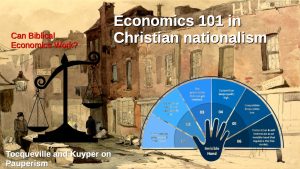 who call themselves Christians. How can a Christian think about or react to the nuances of economics? Well, in the 20th and now the 21st centuries, it has been what the experts from major institutions or think tanks have to say?

One consideration that was already a failure at the inception of our new nation is what I missed at as a member of that think tank: What was a Biblical view of economics? Although there was much pulpit peaching and discussions considering the question of ‘what was Liberty?’ – very little has been paid attention to the moral questions surrounding economics and business in general. END_OF_DOCUMENT_TOKEN_TO_BE_REPLACED

Comments Off on Episode 369: Economics 101 in Christian Nationalism