Who Are The Centinel(s)? Revisiting the Travesty of the Constitution 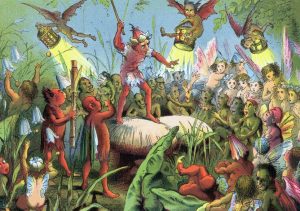 Who are the Centinels that should be keeping the factual and Constitutional perspective on governing both at the Federal and State level? Wait, you are worried about my spelling of Centinel? Well I gather that you have not read the Anti-federalists Papers have you? Centinel was one of the most prolific Anti-federalist writers and very predictive of our present.

I am re-broadcasting the program from October 15, 2016 because it is relevant to the present. Now, Centinel #1 is specific to the October 15th program yet, Centinel #11 brings home what is happening in respect to the States presently. Consider the topic of #11 – ‘The Hobgoblins of Anarchy and Dissentions Among the States.’

The Centinel(s) of our present in respect to the Federal Constitution were intended to be States and the Citizenry in the States. Unfortunately the opening of #11 speak to both the Federal and now, the States in particular. The hobgoblins of these modern times are those produced from academia and the lack of involvement of the churches in all aspects of society. Worse, the modern hobgoblins are the lords of the bureaucracies at every institutional system in all levels of government, business and education. Just to modernize Centinel #11 a tad, my substitutes are emphasized and original struck through –

‘The evils of anarchy have been portrayed with all the imagery of language in the growing colors of eloquence; the affrighted mind is thence led to clasp the new Constitution Marxist ideologies of wokeness as the instrument of deliverance, as the only avenue to safety and happiness. To avoid the possible and transitory evils of one extreme, it is seduced into the certain and permanent misery necessarily attendant on the other. A state of anarchy from its very nature can never be of long continuance; the greater its violence the shorter the duration. Order and security are immediately sought by the distracted people beneath the shelter of equal laws and the salutary restraints of regular government; and if this be not attainable, absolute power is assumed by the one, or a few, who shall be the most enterprising and successful. If anarchy, therefore, were the inevitable consequence of rejecting the new Constitution Marxist ideologies of wokeness, it would be infinitely better to incur it, for even then there would be at least the chance of a good government rising out of licentiousness. But to rush at once into despotism because there is a bare possibility of anarchy ensuing from the rejection, or from what is yet more visionary, the small delay that would be occasioned by a revision and correction of the proposed system of government is so superlatively weak, so fatally blind, that it is astonishing any person of common understanding should suffer such an imposition to have the least influence on his judgment; still more astonishing that so flimsy and deceptive a doctrine should make converts among the enlightened freemen of America, who have so long enjoyed the blessings of liberty. But when I view among such converts men otherwise pre-eminent it raises a blush for the weakness of humanity that these, her brightest ornaments, should be so dimsighted to what is self-evident to most men, that such imbecility of judgment should appear where so much perfection was looked for. This ought to teach us to depend more on our own judgment and the nature of the case than upon the opinions of the greatest and best of men, who, from constitutional infirmities or particular situations, may sometimes view an object through a delusive medium; but the opinions of great men are more frequently the dictates of ambition or private interest.

The source of the apprehensions of this so much dreaded anarchy would upon investigation be found to arise from the artful suggestions of designing men, and not from a rational probability grounded on the actual state of affairs. The least reflection is sufficient to detect the fallacy to show that there is no one circumstance to justify the prediction of such an event. On the contrary a short time will evince, to the utter dismay and confusion of the conspirators, that a perseverance in cramming down their scheme of power upon the freemen of this State [Pennsylvania] the individual States will inevitably produce an anarchy destructive of their darling domination, and may kindle a flame prejudicial to their safety. They should be cautious not to trespass too far on the forbearance of freemen when wresting their dearest concerns, but prudently retreat from the gathering storm.’

Dissention Among the States

The Centinel in this letter points to the fear mongering of the hobgoblins using their influences to create fear among the people regarding dissension among the states. We see a lot of that with how many states have directly elected Marxists into political power but what is worse, is that almost every state has Marxists ideologies of wokeness in every level of their bureaucracies.

Unlike Centinel #11, the States of our time are being subsumed, as predicted by the Anti-federalists, by the Federal Government. We have administrations at the State level and in the O’biden administration being despotic via fiat executive orders and bureaucratic regulations. Centinel #11 addresses this and it is still relevant now.

‘The other specter that has been raised to terrify and alarm the people out of the exercise of their judgment on this great occasion of defending Constitutionalism, the separation of powers and the rights of individual Citizens, is the dread of our splitting into separate confederacies or republics, that might become rival powers and consequently liable to mutual wars from the usual motives of contention. This is an event still more improbable than the foregoing. It is a presumption unwarranted, either by the situation of affairs, or the sentiments of the people; no disposition leading to it exists; the advocates of the new constitution Marxists ideologies of wokeness seem to view such a separation with horror, and its opponents are strenuously contending for a confederation that shall embrace all America under its comprehensive and salutary protection. This hobgoblin appears to have sprung from the deranged brain of Marxist Black Lives Matters, other atheistic ideologies and originally of Publius, [The Federalist] a New York writer, who, mistaking sound argument, has with Herculean labor accumulated myriads of unmeaning sentences, and mechanically endeavored to force conviction by a torrent of misplaced words. He These hobgoblins might have spared his their readers the fatigue of wading through his their long-winded disquisitions on the direful effects of the contentions of inimical (definition: tending to obstruct) states, as totally inapplicable to the subject he was they are professedly treating; this writer has devoted much time, and wasted more paper in combating chimeras (definition: a thing that is hoped or wished for but in fact is illusory or impossible to achieve) of his their own creation. However, for the sake of argument, I will admit that the necessary consequence of rejecting or delaying the establishment of the new constitution full restoration and functioning of State and Federal Constitutionalism would be the dissolution of the union, and the institution of even rival and inimical republics; yet ought such an apprehension, if well founded, to drive us into the fangs of despotism? Infinitely preferable would be occasional wars to such an event. The former, although a severe scourge, is transient in its continuance, and in its operation partial, but a small proportion of the community are exposed to its greatest horrors, and yet fewer experience its greatest evils; the latter is permanent and universal misery, without remission or exemption. As passing clouds obscure for a time the splendor of the sun, so do wars interrupt the welfare of mankind; but despotism is a settled gloom that totally extinguishes happiness. Not a ray of comfort can penetrate to cheer the dejected mind; the goad of power with unabating rigor insists upon the utmost exaction; like a merciless taskmaster, [it] is continually inflicting the lash, and is never satiated with the feast of unfeeling domination, or the most abject servility.

This Centinel summation resonates with our fight against the Marxists ideologies of wokeness:

‘The celebrated Lord Kaims, whose disquisitions of human nature evidence extraordinary strength of judgment and depth of investigation, says that a continual civil war, which is the most destructive and horrible scene of human discord, is preferable to the uniformity of wretchedness and misery attendant upon despotism; of all possible evils, as I observed in my first number, this is the worst and the most to be dreaded.

I congratulate my fellow citizens that a good government, the greatest earthly blessing, may be so easily obtained, that our circumstances are so favorable, that nothing but the folly of the conspirators can produce anarchy or civil war, which would presently terminate in their destruction and the permanent harmony of the state, alone interrupted by their ambitious machinations.’

Sam was of the same opinion as the Pennsylvania Centinel. Where do you stand on understanding the Hobgoblins in you local and state government as well as in the educational system and businesses?

One of largest series of Antifederalist essays was penned under the pseudonym “CENTINEL.” The Philadelphia Independent Gazetteer ran this 24 essay series between October 5, 1787 and November 24, 1788.

Comments Off on Who Are The Centinel(s)? Revisiting the Travesty of the Constitution