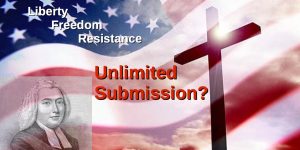 There are the subtle differences in Liberty and Freedom that need to be clarified. In our modern times those words have become synonymous. With having clarity of the differences we can then look at what is proper Resistance to evil – tyranny and despotism.

Liberty and Freedom, in these modern times, are defined moment by moment as the postmodern elites chose to recite the sounds so as to be the ‘Pied Piper’ leading the masses into the river of slavery.

In this era of the ChicomFlu data manipulation and deceptions, the rational for bureaucrats and governors to be despots is for the securing of your ‘Freedom’ to be ‘normal.’ But… you must give up your fundamental Liberties to regain your Freedom.

Restoring Liberty is the foundation of Resistance. A simple verse in James says: Resist the devil, and he will flee. But the words before those are: Be subject therefore unto God.

Tyranny brings ignorance and brutality along with it. It degrades men from their just rank, into the class of brutes. It damps their spirits. It suppresses arts. It extinguishes every spark of noble ardor and generosity in the breasts of those who are enslaved by it. It makes naturally-strong and great minds, feeble and little; and triumphs over the ruins of virtue and humanity. This is true of tyranny in every shape. There can be nothing great and good, where its influence reaches. For which reason it becomes every friend to truth and human kind; every lover of God and the christian religion, to bear a part in opposing this hateful monster. It was a desire to contribute a mite towards carrying on a war against this common enemy, that produced the following discourse. And if it serve in any measure, to keep up a spirit of civil and religious liberty amongst us, my end is answered.

Liberty and Freedom have been assaulted by many governors across this nation. The Free Citizens have been attacked not by a sever flu but by the destruction of the persons in the full context of what that means. To help with that, the Nations Founders put personhood into perspective as: life and property. Property includes intellectual property, businesses, physical items and family members.

Taking Ohio as an example, Governor DeWine and his unelected bureaucratic despots have and are destroying all that is considered personhood for the greater number of Citizens. He has, as of Thursday 3-4-21, declared that Ohio will never be un-muzzled and will have felonious restrictions kept on them. His rational is the manipulation of the data as proven by trusted scientists (see The Ohio Post De-Presser 3-4-2021). The revelation of facts is shocking and appalling.

It is time to claim Reparation for the Free Citizens directly from this Governor and the un-elected bureaucrats. How?

You must do this in your State to secure your God Given Liberties and restore your Freedoms.

…When the constitution was again restored and settled on its own basis, which indeed is the only true basis of all government, the laws of God and nature. – For government is an ordinance of Heaven – design’d by the all-benevolent Creator, for the general happiness of his rational creature, man.

…When pressed with that fundamental principle of nature and the constitution, that what is a man’s own, is absolutely his own, and that no man can have a right to take it from him without his consent…

…Had not this doctrine been repeatedly urged, I should have thought the bare mentioning it would have opened the eyes of the people there, to have seen where their pretended advocates were leading them: That in order to establish a right in the people in England to enslave the colonists, under a plausible shew of great zeal for the honor of the nation, they are driven to a bold assertion at all adventures, that truly the greater part of the nation are themselves subject to the same yoke of bondage. What else is it but saying that the greater part of the people in Britain are slaves? For if the fruit of all their toil and industry, depends upon so precarious a tenure, as the will of a few, what security have they for the utmost farthing? What are they, but slaves, delving with the sweat of their brows, not for the benefit of themselves, but their masters? After all the fine things that have been said of the British constitution, and the boasted freedom and happiness of the subjects who live under it, will they thank these modern writers, these zealous assertors of the honor of the nation, for reducing them to a state, inferior to that of indented servants, who generally contract for a maintenance at least, for their labor.

Whatever air of significance these gentlemen may put on, their assertion, made with so much seeming gravity, I believe, when examined, will appear to be without the least foundation in reason: It is against the plain and obvious rule of equity, whereby the industrious man is intitled to the fruits of his industry: It weakens the best cement of society, as it renders all property precarious: And it destroys the very end for which alone men can be supposed to submit to civil government, which is not for the sake of exalting one man, or a few men, above their equals, that they may be maintained in splendour and great ness; but that each individual, under the joint protec tion of the whole community, may be the Lord of his own possession, and sit securely under his own vine.

1. Freedom vs. Liberty: How Subtle Differences Between These Two Big Ideas Changed Our World

Comments Off on 3-6-21 Liberty, Freedom and Resistance – Mayhew ‘Unlimited Submission’