This program will focus on The Question of Sedition and Trump listening to Dr. Franklin following a quick opening discussion. Further down in this posting, I give my thoughts on the Coronavirus (Flu) issues. More important for this program, I reflect on two points:

In Ohio the election is this coming Tuesday, March 17th. As I noted last week, it is critical that you understand the local issues and candidates. It is our responsibility to participate in our government!

This takes me to the quick second point that I hammer on all of the time: Christians have duel Citizenship. That means that we are absolutely responsible to participate in governing with God’s principles! The culture and dysfunctional governing bodies are the way that they are because Biblical Christianity is sitting on the rooftops – disengaged from the reality in front of them.

It is time to get a grip and jump into the mire with the Truth of Biblical Principles to lead in our Constitutional Republic. It is your responsibility!

In my opinion, the deamoncrats and the those egotistical, high-minded bureaucrats and politicians are Seditious. With that, the conversation will defer to US Code which you will learn has one word that minimizes my characterization of the offenses of those already mentioned.

See the references for the definitions and US Code. 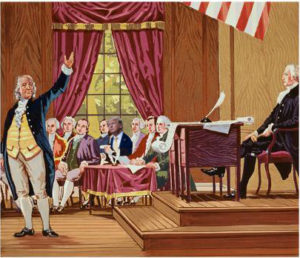 On June 2, 1787 Dr. Franklin made a statement in the debates that was concerning the ‘compensation of the President.’ In this speech, he predicts the power-mongers that have been president over the many decades, especially in the last forty years.

Donald Trump listens in to this speech that not only defines the characteristics of those who will run for president to gain power, money and prestige but certainly for becoming rich. Dr. Franklin gives the examples from England where high offices take no compensation and then of a true American Patriot who won the Revolution and took no pay.

More so, in the first paragraph, Dr. Franklin makes a point of what the envious power-mongers would do to the likes of a Donald Trump.

If your primaries are this Tuesday, Study the issues and Vet your candidates. Then GO Vote!

Don’t let the panic of the ‘corona flu’ make you fearful. Be an adult. Use common sense and don’t let the local or state government ‘dictate’ your life or your Liberty!

I’m not making any earth-shattering statements here. Only looking at common sense and that our enemies are putting the full court press on as not seen since the 1760’s.

There are many quotes from the Founders that I can make that reflect the ‘Cabal’ of those inflicting fear as a control mechanism. The following Sam Adams Wisdom quote is a clip of the greater issue of the day that represents misinformation and the fear that then occurs.

There were financial strains and fear. There were rumors of massive mob violence when in reality there were small instance of hooligans. The issue of Property and Liberty were at stake.

This Corona Flu has a targeted demographic and all reasonable people with common sense will act in a manner no different than any other ‘Flu Season’ and past pandemic scares.

The Idea that the Ohio Governor would use an Executive Order to out right STOP Citizen activities amounts to what was happening during the 1760’s through and to the Actions of 1776. He has over-reach in bad council and his own fears.

In my humble analysis, the handling of this illness is a direct attack on our Liberties, Economy and Associations. Although it has begun in China, the fire of disaster is flamed by the haters of our Constitutional Republic and a Free People. You can take the time to add the groups, names and associations – media, to the list of culpable Cabal characters.

At this time, It is a test of those who truly understand Foundational Liberty and those who Understand the Sovereignty of the Living God of Biblical reality. Lastly with this is that action must be taken.

Yes, act to keep yourself and family safe but act by making phone calls to the Ohio Govern’s office denouncing his act of tyranny, Act to inform others that fear is not to be the dominating factor in this ‘Flu Season’, Act in Prayer that Liberty again becomes mindful and meaningful since people are duped into believing that government should solve all things, and lastly – Act as a resourceful Citizen of this Republic and never cow-tow to (as De Tocqueville called it) ‘the mild despotism and tyranny’ that comes with a presumed civil society.

“It is said that our brethren at Halifax, are under such dismal apprehensions of our being upon the point of ruin by mobs and tumults, that a certain gentleman there has seen fit, to order his interest out of the hands of a merchant of worth and credit, and committed it to the care of the boatswain of his Majesty’s ship Romney, still riding in this harbour. How far these apprehensions will be strengthened by his Excellency s Proclamation in the last Thursday paper, every reader is as capable of judging as I am. It is certainly a grievous hardship that we should be so grossly misrepresented ; and if these falsehoods make such impressions on the minds of persons so near to us as Halifax, it cannot be wondered at, if the mother- country at the distance of a thousand leagues, should think that we are in a state of confusion, equal to what we hear from the orderly and very polite cities of London and Westminster. There,we are told,is the Weavers mob, the Seamens mob, the Taylors mob, the Coal miners mob, and some say, the Clergys mob ; and in short it is to be feared the whole kingdom, always excepting the and the P 1, will unite in one general scene of tumult : I sincerely pray for the peace and prosperity of the nation and her colonies, whose interest if she would open her eyes she would clearly discern to be undivided. If it be a truth, as I take it to be, that the people are seldom if ever discontented, without just cause, we may conclude, that the wheels of good government there are somewhat cloged, which it is to be hoped the wisdom of the nation will discover and remedy. That the people of this province are universally un easy, all must allow ; but that they are disposed to be mobbish, I utterly deny, and take it upon me to say, that to assert it is a vile abuse of them. What in stance can be produced to show that the peace and good order of the province hath been of late greatly interrupted by the riots and tumults, which have taken place in divers towns within the same ? I have never heard of any, and I question whether there can ~~1 be one mentioned to justify the assertion. If we are pointed to a stirring that was made in this town about two months ago, let us consider the circumstances which previously took place. Can any one be surprized, that when property was violently seized, under a pretence of law, at an unseasonable time, at or after sunset, by the aid of military power, a power ever * dreaded by all the lovers of the peace and good order of the province, and without any reason assigned or apparent : Is it at all surprizing that such ill- timed, violent and unheard of proceedings, should excite the resentment even of the better sort of people in the town. What was the mighty consequence ? a few persons appeared to resent it, and after break ing a few panes of glass, by the influence of the inhabitants, they dispersed without doing any further damage : The gent, commissioners three days after took it into their heads to go down to the castle, where they have since resided, and the town has been ;in perfect peace, and I believe will so remain, at least till they return. I am not now justifying even this little inconsiderable rising of the people ; nor is it my business that I know of to condemn it. I appeal to the world, upon this short but full relation of the facts, whether there was not an acknowledgment due to the inhabitants of the town, for their disposition to main tain good order, which by the way they have upon all proper occasions discovered, rather than a necessity of calling upon them, as tho they had been deficient, – Writings of Sam Adams Volume I pg 255

9. Adam Andrzejewski – The Depth of the Swamp, Hillsdale College Program in Florida

10. Open the Books – the world’s largest database of public sector spending, whether at the federal, state, or local level.