The Course of Events 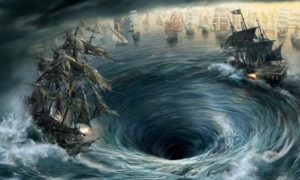 This week, in the Course of Events – the journey of personal revelation is played out in what ebbs and tides the sea of life.

As I reflect on this past week, there are those aspects of life that move in the tide of macro and micro instances of what is before us. The constant in it all is that we must balance the view of the ocean to cross and the puddle we are about to step in or the tear that is to be wiped off of a cheek. Where are our eyes focussed in the mist that can hover over any water and obscure the reality of its true dangers or joys.

This week the tides and winds have taken us on a journey of all that causes the oceans to fill and then refreshes the lands with the waters cleansed by the evaporation from the sea. The macro of national politics where fear has paralyzed those who succumb to an idolatry of science. The micro of family that has many mixed blessings but can rage as the ocean storms. All combine to effect the course of events that call for steadfastness and a source of continuity.

The macro course of events has altered if not impeded the nations capacity to worship the Living God that brought our Forefathers to this land. The waves of progressive ideologies have eroded the shores of valued concrete principles into the sands of subjugation. The rocks of Plymouth are over crusted with the slime of vanity, pride, technology, elitism and intelligentsia. The humble prayers to a Living God washed off and out of the bedrock of Foundational Truth. Driven by the present course of events – the National Day of Prayer was quickly washed out to the sea of nothingness by the fast riptide of the prophets of fear and capitulation before their gods.

In the micro, the lives of millions, the effects are mixed in the turmoils of the whirlpools of loss. The frothing swirl of the torrent that rips into the capacity to sustain ones family and life is swallowed in the vortex of government transcendence. This overwhelming tumult of opposing political, medical and life sustaining currents pulls at the essence of individuals, families and a nation.

In the deepest parts of the sea, seemingly the vortex of ideologies are now rising to the surface sufficient to engulf every family in the maelstroms of government dependency. The ability to sail ones own ship to the safe harbors of home and family are spinning, being pulled down by the tsunami crashing on the walls of the covenant within constitutionalism that was enacted to be the beacon for a safe harbor. Predictably by the Anti-federalists, the loss of vision, morality and a Foundation in God has rapidly driven the opposing tides to collide and therefore the people suffer.

In all of this storm and convulsion of the waters there is one that settles every droplet. As our Founding Fathers recognized, no nation, no constitution, no state or family can be sustained by government. The only sustenance of life is in the giver of life.

This storm of fear, this raging sea of ideological turbulence with riptides and whirlpools is calmed only by ones personal faith in the Living God. This faith is what brings all people and a nation to stability in every aspect of living.

With that said, this has been a week of fast moving tides that is requiring a program rerun. Interesting is that I did not read the attached letter by Sam Adams to Thomas Jefferson until I finished writing the above. Hmmm….

The following is from March of 2016. Relevance to now is within the context of the program:

In this program, I clarify some comments from a previous week regarding our Jewish and Muslim friends.

Most importantly, I discuss the basics of our founders intent regarding for Religious Freedom.  I bring in the full context of Jonas Phillips who was a strong Patriot Jew.  He wrote to those gathered in the 1787 Convention, particularly to George Washington, discussing the oath of office in the Pennsylvania Constitution.

With all the rhetoric going on about the Muslim issue in the US and the World, I had to do some research from the foundation regarding this issue.  I discuss the Founders intent for all the different religions and I am emphatic regarding the absolute fact that any person wanting to reside in the US must assimilate into our culture and our laws (period)!

At the beginning of the program, I touch on the Obama era Supreme Court appointment.

Reference for This Program:

[MS., Library of Congress; a draft is in the Samuel Adams Papers, Lenox Library.]

Your Letter of the 29th of March came duly to my hand. I sincerely congratulate our Country on the arrival of the day of Glory which has called you to the first office in the administration of our federal Government. Your warm feeling of friendship must certainly have carried you to a higher tone of expression than my utmost merits will bear. If I have at any time been avoided or frowned upon, your kind ejaculation in the language of the most perfect friend of Man, surpasses every injury. The Storm is now over, and we are in port, and I dare say, the ship will be rigged for her proper service; she must also be well man’d and very carefully officered. No man can be fit to sustain an office who cannot consent to the principles by which he must be governed. With you, I hope, we shall once more see harmony restored; but after so severe and long a storm, it will take a proportionate time to still the raging of the waves. The World has been governed by prejudice and passion, which never can be friendly to truth; and while you nobly resolve to retain the principles of candour and of justice, resulting from a free elective Representative Government, such as they have been taught to hate and despise; you must depend upon being hated yourself, because they hate your principles, not a man of them dare openly to despise you; your inaugural speech, to say nothing of your eminent services to the acceptance of our Country, will secure you from contempt. It may require some time before the great body of our fellow citizens will settle in harmony good humour and peace. When deep prejudices shall be removed in some, the self interestedness of others shall cease and many honest Men, whose minds for want of better information have been clouded, shall return to the use of their own understanding, the happy and wished for time will come. The Eyes of the people have too generally been fast closed from the view of their own happiness, such alass has been always the lot of Man! but Providence, who rules the World, seems now to be rapidly changing the sentiments of Mankind in Europe and America. May Heaven grant that the principles of Liberty and virtue, truth and justice may pervade the whole Earth. I have a small circle of intimate friends, among whom Doctr Charles Jarvis is one; he is a man of much information and great integrity. I heartily wish there may be an epistolary correspondence between him and you. I should have written this Letter before, had not my faithfull friend and amanuensis John Avery, who is your friend as well as mine, been occupied in the business of his office of Secretary of this Commonwealth, which he attends with great punctuality and integrity. It is not in my power my dear friend, to give you council; an Old Man is apt to flatter himself, that he stands upon an equal footing with younger Men; he indeed cannot help feeling that the powers of his Mind, as well as his body are weakened; but he relies upon his memory, and fondly wishes his young friends to think that he can instruct them by his Experience, when in all probability he has forgot every trace of it, that was worth his memory. Be assured, that my esteem for you is as cordial, if possible, as yours is to me. Though an Old Man cannot advise you, he can give you his Blessing. You have devoutly my Blessing and my Prayers.

My dear Mrs. Adams will not suffer me to close this Letter, till I let you know, that she recollects the pleasure and entertainment you afforded us, when you was about to embark for France, and hopes that your administration may be happy to yourself and prosperous to our Country.

Picture: Sea of Thieves posted on twitter by: @seaofthieves