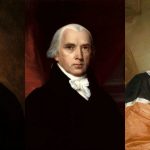 The Law as seen put into practice in our present time needs more than one discussion. The Law: Part 2 is a continuation of the historical and foundational truths regarding the supremacy of law in relationship to everything. No different then the extensibility of the Gospel, the whole law of God is manifested in every aspect of His creation. Yet we learn via the reference noted below from LONANG.COM that our foundational historical context of law degenerated about the same time as the ‘social gospel’ made its rage in America.

I somewhat delve into Federalist No. 37 in this program because Madison, as a student of Dr. Witherspoon, has a clear understanding of the fallen nature of mankind. In No. 37, Madison does more than defend the ‘convention of ’87’. He takes us on that journey that encompasses the ‘Laws Of Nature and Natures God’. He looks at natural science, psychology, authority, communication and human bias.

In the end, he uses historical references in his efforts to convince the general public of the difficulties faced in the convention. His closing paragraphs include these statements:

“…The real wonder is that so many difficulties should have been surmounted, and surmounted with a unanimity almost as unprecedented as it must have been unexpected. It is impossible for any man of candor to reflect on this circumstance without partaking of the astonishment. It is impossible for the man of pious reflection not to perceive in it a finger of that Almighty hand which has been so frequently and signally extended to our relief in the critical stages of the revolution.”

“…The history of almost all the great councils and consultations held among mankind for reconciling their discordant opinions, assuaging their mutual jealousies, and adjusting their respective interests, is a history of factions, contentions, and disappointments, and may be classed among the most dark and degraded pictures which display the infirmities and depravities of the human character. If, in a few scattered instances, a brighter aspect is presented, they serve only as exceptions to admonish us of the general truth; and by their lustre to darken the gloom of the adverse prospect to which they are contrasted. In revolving the causes from which these exceptions result, and applying them to the particular instances before us, we are necessarily led to two important conclusions. The first is, that the convention must have enjoyed, in a very singular degree, an exemption from the pestilential influence of party animosities the disease most incident to deliberative bodies, and most apt to contaminate their proceedings. The second conclusion is that all the deputations composing the convention were satisfactorily accommodated by the final act, or were induced to accede to it by a deep conviction of the necessity of sacrificing private opinions and partial interests to the public good, and by a despair of seeing this necessity diminished by delays or by new experiments.”

I don’t think I’m going to have all the time needed to develop what is historically correct on ‘The Electoral College’. The compilers of the Federalist Papers are not sure if it was Madison or Hamilton who actually wrote No. 57. In a series of acticles the question of good and propper representation is the hot point. Here in No. 57 the write is actually addressing what the Anti-federalists predicted would be the makeup of Congress as it now is: “THE THIRD charge against the House of Representatives is, that it will be taken from that class of citizens which will have least sympathy with the mass of the people, and be most likely to aim at an ambitious sacrifice of the many to the aggrandizement of the few.”

What is importand here is that the author of No. 57 identifies the direct relationship between the individual voter, the state legislature and the ‘electors’ choosen for ‘The Electoral College’. It is noted that this is a security measure for the States in relationship to the federal government.

OH, as you read No. 57 you will see the contradiction of the assumptions of humanity referenced in No. 37. So my guess is that Hamilton wrote No. 57. AND Yes, The Anti-federalists were 100% correct regarding who would end up in the House as modern times dispel the arguments of No. 57.