Many articles and references have been showing up in my email regarding Christian Nationalism. I 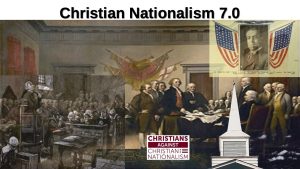 thought the article by John D. Wilsey titled ‘The Many Faces of Christian Nationalism’ is a nice walk through history on this area of Political Theology.

I titled this program Christian Nationalism 7.0 in consideration of the seven distinct sections that are time stamps in the American story of Christianity being the influencer in governing the nation as well as the source of Patriotism – love of country.

I do a quick analysis of the paper by Wilsey. I have two areas where I have some disagreement with him. Those being his analysis of Lincolnian Unionism and Wilsonian Idealism. I do not consider either of these to be representative of positive eras of Christian Nationalism but more of the sort that used Christian references to justify their progressivism. This is especially true with Woodrow Wilson and his side kick John Foster Dulles.

Italy – A Return to Christian Nationalism?

Just a side note, If you want to hear Christian Nationalism bubbling, go and read the speeches of the new Italian Prime Minister. She nails it. See the analysis by Doug Wilson and Tucker Carlson.

In my extra reading time I have be deep diving into de Tocqueville’s ‘Democracy in America.’ I want to give you these observations just from the Introduction:

‘The whole book which is here offered to the public has been written under the impression of a kind of religious dread produced in the author’s mind by the contemplation of so irresistible a revolution, which has advanced for centuries in spite of such amazing obstacles, and which is still proceeding in the midst of the ruins it has made. It is not necessary that God himself should speak in order to disclose to us the unquestionable signs of His will; we can discern them in the habitual course of nature, and in the invariable tendency of events: I know, without a special revelation, that the planets move in the orbits traced by the Creator’s finger. If the men of our time were led by attentive observation and by sincere reflection to acknowledge that the gradual and progressive development of social equality is at once the past and future of their history, this solitary truth would confer the sacred character of a Divine decree upon the change. To attempt to check democracy would be in that case to resist the will of God; and the nations would then be constrained to make the best of the social lot awarded to them by Providence.’

‘…The first duty which is at this time imposed upon those who direct our affairs is to educate the democracy; to warm its faith, if that be possible; to purify its morals; to direct its energies; to substitute a knowledge of business for its inexperience, and an acquaintance with its true interests for its blind propensities; to adapt its government to time and place, and to modify it in compliance with the occurrences and the actors of the age…’

‘There is a country in the world where the great revolution which I am speaking of seems nearly to have reached its natural limits; it has been effected with ease and simplicity, say rather that this country has attained the consequences of the democratic revolution which we are undergoing without having experienced the revolution itself. The emigrants who fixed themselves on the shores of America in the beginning of the seventeenth century severed the democratic principle from all the principles which repressed it in the old communities of Europe, and transplanted it unalloyed to the New World. It has there been allowed to spread in perfect freedom, and to put forth its consequences in the laws by influencing the manners of the country.’

Tocqueville has a lot more to say regarding religion and government with it all boiling down to the simplicity of Kuyperian political theology defined in his ‘Stone Lectures’ delivered at Princeton in 1898, culminating in – The Sovereignty of God over all, that means ALL, of creation.

Here is a quote from a paper on the welfare state that I will not have time to talk about but will in another program:

‘Kuyper proposes that the humanism produced by the French Revolution that later birthed socialist movements sought to resolve social problems, especially poverty and inequality. Tocqueville’s predictions in the 1830s became reality in Kuyper’s time. By the end of the nineteenth century, socialist movements did become the dominant ideology. Kuyper also discusses five different ideological camps that emerged out of socialism, including nihilism, anarchism, social democracy, state socialism, and cynical pessimism. Each of these at its core arose out of a concern for the social problems created by the French Revolution. Thus, they are all characterized by an antireligious attitude, for the root principle of the Revolution was not humanism, but rather a rebellion against God’s rule and a will to establish human rule—“neither God, nor master.” – from ‘Tocqueville and Kuyper on the Problem of Poverty in Modern Society’ by Li Ma,Henry Institute, Calvin College and Jin Li, Calvin Theological Seminary

What I won’t get to on the program

I mention two topics that I wanted to discuss on the program but ran out of time.

First is the discussion of the Ohio Constitution Convention of 1912. I am deferring that to a completely different program that will be our of synch with the regular program.

As simple quote from Sam’s speech regarding the Declaration of Independence:

‘This day, I trust the reign of political protestantism will commence. We have explored the temple of royalty, and found that the idol we have bowed down to, has eyes which see not, ears that hear not our prayers, and a heart like the nether millstone. We have this day restored the Sovereign, to whom alone men ought to be obedient. He reigns in Heaven, and with a propitious eye beholds his subjects assuming that freedom of thought, and dignity of self-direction which He bestowed on them. From the rising to the setting sun, may His kingdom come.’

Embedded in the posting

Comments Off on Episode 368: Christian Nationalism 7.0