Episode 367: Vetting of Candidates Before Giving Your Suffrage 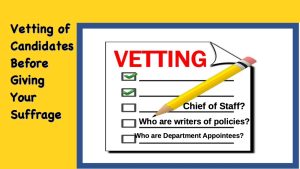 election? The fact is that I have not seen proper or in-depth vetting of candidates since 2009 in Clark County, Washington. We did such a good job at getting to the nit-grit that a now sitting Congresswoman was heard on our sound guy’s headphones repeating to herself, ‘I can do this.’ She was having to work up her confidence since the vetting was not the simple standard questions.

Most venues for candidates questioning are playful panels that never get to the deep and underlying truths of who a candidate is and how will they actually function once elected. You have the responsibility for the vetting of candidates before giving your suffrage.

It is interesting on how definitions change. It is true with the word Suffrage. Webster’s 1828 dictionary defines suffrage as: ‘A vote; a voice given in deciding a controverted question, or in the choice of a man for an office or trust. Nothing can be more grateful to a good man than to be elevated to office by the unbiased suffrages of free enlightened citizens..’ A newer definition is simply: ‘the right to vote in political elections.’

Both Sam Adams and James Wilson had a lot to say regarding suffrage. Both take into consideration the historic English/British right to vote. Wilson more clearly applies the principles in both his arguments at the Constitutional Convention as well as in his other writings.

I highly recommend that you go to the last Samuel Adams Wisdom, the quote from the letter to James Warren. Here is a tidbit: ‘If the People should grant their Suffrages to Men, only because they conceive them to have been Friends to the Country, without Regard to the necessary Qualifications for the Places they are to fill, the Administration of Government will become a mere Farce, and our pub-lick Affairs will never be put on the Footing of solid Security.’

In the second segment of the program I am introducing you to what can only be called a deliberate destruction of federalism and Liberties under the guise of Constitutional Reform. Looking back in time, the 1912 Ohio Constitutional Convention was a major play by power brokers and progressives. I get into this a whole lot more in the Ohio Constitution Study Group that I facilitate. Those in NE Ohio can contact me for more information on the study group.

From Writings Volume I

Page 98 – ‘Oppugnation of the King s author ity is but a learned mode of expression, which reduced to plain English, is fighting against the King s most excellent Majesty. But what, sir, is the oppugnation which we have been guilty of? We were summoned and convened here to give our free suffrages at the general election, directed to be annually made by the royal charter. We have given our suffrages according to the dictates of our consciences, and the best light of our understanding. It was certainly our right to choose, and as clearly a constitutional power in your Excellency to disapprove, without assigning a reason either before or after your dissent.. Your Excellency has thought proper to disapprove of some. We are far even from suggesting that the country has by this means been deprived of its best and ablest servants. We have released those of the Judges of the Superior Court who had the honor of a seat at the Board, from the cares and perplexities of politics, and given them opportunity to make still farther advances in the knowledge of the law, and to administer right and justice within this jurisdiction.’

Page 104 – ‘Your Excellency says, ‘it is impossible to give any tolerable coloring to this proceedings.’ the integrity and uprightness of our intentions and conduct is such, that no coloring is requisite, and therefore we shall excuse ourselves from attempting any. We hold ourselves to be quite free in our suffrages ; and provided we observe the directions of our charter, and the laws of the land, both which we have strictly adhered to, we are by no means accountable but to God and our own consciences for the manner in which we give them. We believe your Excellency is the first Governor of this province that ever form ally called the two Houses of Assembly to account for their suffrages, and accused them of ingratitude and disaffection to the Crown, because they had not bestowed them on such persons as in the opinion of the Governor, were quite necessary to the administration of government. Had your Excellency been pleased in season to have favored us with a list, and positive orders whom to choose, we should, on your principles have been without excuse…’

Page 105 (quoted on the program) – ‘We would hope that your Excellency does not mean open and publicly to threaten us with a deprivation of our charter privileges, merely for exercising them according to our best judgment and discretion. As to us, as our charter is, we should think it of very little value, if it should be adjudged that the sense and spirit of it require the electors should be under the absolute direction and control of the Chair, even in giving their suffrages. For what ever may be our ideas of the wisdom, prudence, mildness and moderation of your administration, of your forgiving spirit, yet we are not sure your successor will possess those shining virtues.’

Page 125 – To Mrs. Adams – ‘You was mistaken when you supposd that I had heard who were chosen into the highest Places under our new Constitution. We are not so well informd. I had Reason to believe that Mr Hancock would be the Governor. I am disposd to think, that my Fellow Citizens had upright Views in giving him their Suffrages. Many Circumstances have combind to make his Election appear to be politically necessary; and if the People, who are now blessd with so great a Privilege, will exercise that Watchfulness over Men whom they exalt to Places of Power, which their Duty & Interest should lead them to do, I flatter myself that his will prove a happy Choice. You may wonder at my saying so; but I think I am not misguided in my Judgment in this Instance. If they have now chosen a wise & virtuous Governor, a few only will be disappointed; if otherwise, Many will see their Error, and will be indued to greater Vigilance for the future.’

Page 126 – To James Warren – ‘…If ever the Time should come, when vain & aspiring Men shall possess the highest Seats in Government, our Country will stand in Need of its experiencd Patriots to prevent its Ruin. There may be more Danger of this, than some, even of our well disposd Citizens may imagine. If the People should grant their Suffrages to Men, only because they conceive them to have been Friends to the Country, without Regard to the necessary Qualifications for the Places they are to fill, the Administration of Government will become a mere Farce, and our pub-lick Affairs will never be put on the Footing of solid Security. We should inquire into the Tempers of Men, in order to form a Judgment in what Manner the publick Trusts to be reposed in them will be executed. You remember the Character of Pisistratus. He was a Citizen of Athens, supposd to have many excellent Qualities, but he had an insatiable Lust of Pre-eminence. Solon could discover his Vanity, but the People were blinded by a false Glare of Virtues and he was their Idol. Under Pretence of his having escaped imminent Danger from a violent Faction, and the further Insecurity of his Person he artfully obtaind a Guard of Soldiers, by which Means he possessd himself of the Citadel & usurpd the Government. But though he made himself Sovereign, & thus far overthrew the popular Election, the Historian tells us, “that he made no Change in the Magistracy or the Laws.—He was content that others should hold their Places according to the establishd Rules of the Constitution, so that he might continue Archon, independent of the Suffrages of the People. This he effected; for though several Attempts were made, to deprive him of the Sovereignty which he had so violently obtaind, he held it till his Death & left it to his Children.” Such was the Ambition of this Man, who indeed assumd the Government, and such were the Effects of it. Power is intoxicating; and Men legally vested with it, too often discover a Disposition to make an ill Use of it & an Unwillingness to part with it…’

3. Works of James Wilson, Volume I

Comments Off on Episode 367: Vetting of Candidates Before Giving Your Suffrage