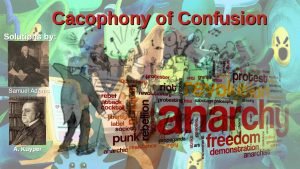 Video on Rumble at this Link

This program not only covers the Cacophony of Confusion and chaos across the general Citizenry in the nation but also a quick dive into the states, again Ohio for instance, and within American Christendom. Many pundits are making a lot of noise and quite frankly, a lot of money, barking and howling their version of National Restoration.

Finding national restoration has historical roots. None of the canines of the media, whether sheep dog or mongrels, are looking to what is the roots of national restoration. No, they whimper, growl, howl and bark; with some sadly being eaten by flies with their heads in boxes with no real answers to restoring the nation.

In the first segment of the program I present some of that cacophony of confusion. Let me begin with asking these Questions:

See the references below for the appropriate links.

The Cacophony of Confusion Gets Louder

Let me begin segment #2 with a hit to your pocketbook. Well, where you have to put your money so that you can transact personal commerce – Banking. How about considering that local banking could go the way of the puppies mentioned above. Consider that in 1740 the ‘Land Bank’ in province of Massachusetts Bay was closed by parliamentary legislation for the British Central Bank. Yes, Sam Adams was very familiar with this since it affected his father’s estate. See references on Land Bank

Now let’s bring your pocketbook into the control of Cornell Law School Professor Saule Omarova, considered for the next Comptroller of the Currency. Putting her in charge of the Office of the Comptroller of the Currency (OCC), the Treasury agency that supervises national banks and federal thrifts. Check out her Marxist ideas of all banking, your currency, going to the treasury only… NO more local banking – The People’s Ledger: How to Democratize Money and Finance the Economy.

Next a quick checkin on the supply chain starting with the 80,000 truck driver shortage which is compounding the backup in the ports. See more on ports and truckers in References.

There is more of the cacophony of confusion regarding the ChicomFlu than we can take space or time for but…. You are intelligent individuals so you are already doin your research and are aware of the Stalin approach to this destruction of Liberty. Yup, I have a few links in the references.

Don’t forget transgender confusion and then there is critical race theology, yes it isn’t a theory – it is a false theology, and the list can go on… and on.

The media and Internet is flooded with the grating grinding, echoing cacophony of confusion.

Oh, here is one that really grates my gourd. So we all know that the Fed DOJ really messed up with the General Flynn case. You know, hiding evidence. Well, monkey see, monkey do – here we go in Idaho. A couple of months ago I had Pastor Doug Wilson on and we talked about the ‘Sticker Gate’ case that involved his family members. The real background here is that Christ Church in Moscow LIVES the extensibility of the Gospel as we will discuss in the last segment but the real story is the ‘monkey do’ acting in the ‘Sticker Gate’ case. Check out the General Flynn escapades at the local level (Moscow PD Buries Evidence in Sticker Case for More than a Year), which could happen if your church ever decide to really, really impact the community.

The Historical Solutions to the Cacophony of Confusion

There is no straight political solution and the pundits are propagators of emotional reactionism. In this 3rd segment I am presenting the solution that has worked not only in the founding of these United States but also at one time in the Netherlands.

Simply put, The Gospel as lived and carried into all areas of life by two great examples, Samuel Adams and Abraham Kuyper.

We need the pulpits of Sam Adams time and Pastors like Kuyper now.

See the references and you can download my Notes on Sam and Abraham if you want more reading on this solution.

A Letter to John Adams, Vice President of the United States November 20, 1790.

‘…The love of liberty is interwoven in the soul of man, “so it is in that of a wolf.” However irrational, ungenerous, and unsocial the love of liberty may be in a rude savage, he is capable of being enlightened by experience, reflection, education, and civil and political institutions. But the nature of the wolf is, and ever will be, confined to running in the forest to satisfy his hunger and his brutal appetites ; the dog is inclined in a very easy way to seek his living, and fattens his sides from what comes from his master’s kitchen. The comparison of La Fontaine1 is, in my opinion, ungenerous, unnatural, and unjust.

Among the numbers of men, my friend, are to be found not only those who have “preferred ease, slumber, and good cheer to liberty,“ but others who have eagerly sought after thrones and sceptres, hereditary shares in sovereignty, riches and splendor, titles, altars, garters, crosses, eagles, and many other childish playthings, at the expense of real nobility, without one thought or care for the liberty and happiness of the rest of mankind.

“The people who have no property feel the power of governing by a majority, and ever attack those who have property.” “The injured men of property recur to finesse, trick, and stratagem to outwit them.” True: these may proceed from a lust of domination in some of both parties. Be this as it may, it has been known that such deceitful tricks have been practised by some of the rich upon their unsuspecting fellow-citizens, to turn the determination of questions so as to answer their own selfish purposes. To plunder or filch the rights of men are crimes equally immoral and nefarious, though committed in different manners. Neither of them is confined to the rich or the poor; they are too common among both. The Lords as well as the Commons of Great Britain, by continued large majorities endeavored by finesse, tricks, and stratagems, as well a threats, to prevail on the American Colonies to surrender their liberty and property to their disposal. These failing, they at tempted to plunder our rights by force of arms. We feared their arts more than their arms. Did the members of that hereditary House of Lords, who constituted those repeated majorities, then possess the spirit of nobility? Not so, I think. That spirit resided in the illusirious minorities in both Houses.’

1. Illegal Currency: Ipswich and the Land Bank scheme of 1740-41, By Gordon Harris

3. If Truckers Like Me Won’t Comply, Biden’s Vaccine Mandate Could Tank The Economy

5. Biden’s Next Tactic For Forcing The Vaccine Is ‘Counseling’ You To Do As He Says

6. FDA Committee Member Admits He Doesn’t Know If The Vaccine Is Safe For Kids But Approves It Anyway

12. As China Stops Exports of Phosphate, what will be the impact on 11-52 Prices and Availability?

1. Sam Adams references from Life and Public Service Volumes I & III as well as three volumes of Writings of Samuel Adams

2. The Stone Lectures given at Princeton, 1898 by Kuyper

3. The Biography and Biology of Liberty: Abraham Kuyper and the American Experiment by John Witte, Jr.

1The Wolf and the Lean Dog, the second Rhyme at this link: World Of Tales

Comments Off on Episode 324: Cacophony of Confusion