Statist Religion vs God and Liberty 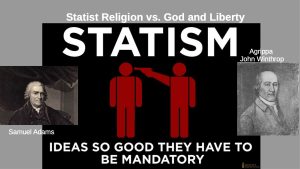 Statist Religion is, as I have discussed in other programs – see Here, Here and Here, the national religion. The demise of true ‘republicanism’ is discussed in this program from the archives of Samuel Adams and the Anti-federalist Agrippa. What is clear is that the underpinnings of it all is the constant vigilance regarding Statist Religion vs God and Liberty.

American took the heavy turn around the time of the Civil War with man centered theology and philosophy toward the Statist view. This was the Hamiltonian dream, advocating for a political system in which the state has substantial centralized control over social and economic affairs.

Listen as I explore the demise of Liberty based on statism supplanting the Foundational Biblical Reformation view of God and Liberty from the words of Agrippa and Sam Adams.

Yes, Washington State as all states has a Constitution. As with most state having Marxist in the legislature, administrative branch and the bureaucracies, the Article I, Bill of Rights is voided as well as other critical Article in that Covenant with the Citizenry.

Again, the people are ignorant of their necessity to self-govern and are conceding to the Statist Religion of government.

Agrippa Wisdom for the Present

Many inconveniencies and difficulties in the new plan of government have been mentioned by different writers on that subject. Mr Gerry has given the publick his objections against it, with a manly freedom. The seceding members from the Pennsylvania Assembly also published theirs. Various anonymous writers have mentioned reasons of great weight. Among the many objections have been stated the unlimited right of taxation–; a standing army–; an inadequate representation of the people–; a right to destroy the constitution of the separate states, and all the barriers that have been set up in defence of liberty–; the right to try causes between private persons in many cases without a jury; without trying in the vicinity of either party; and without any limitation of the value which is to be tried. (before the Bill of Rights were amended) To none of these or any other objections has any answer been given, but such as have acknowledged the truth of the objection while they insulted the objector. This conduct has much the appearance of trying to force a general sentiment upon the people.

The idea of promoting the happiness of the people by opposing all their habits of business, and by subverting the laws to which they are habituated, appears to me to be at least a mistaken proceeding. If to this we add the limitations of trade, restraints on its freedom, and the alteration of its course, and transfer of the market, all under the pretence of regulation for federal purposes, we shall not find any additional reason to be pleased with the plan.

It is now conceded on all sides that the laws relating to civil causes were never better executed than at present. It is confessed by a warm federalist in answer to mr. Gerry’s sensible letter, that the courts are so arranged at present that no inconvenience is found, and that if the new plan takes place great difficulties may arise. With this confession before him, can any reasonable man doubt whether he shall exchange a system, found by experience to be convenient, for one that is in many respects inconvenient, and dangerous? The expense of the new plan is terrifying, if there was no other objection. But they are multiplied. Let us consider that of the representation.

There is to be one representative for every thirty thousand people. Boston would nearly send one, but with regard to another there is hardly a county in the state which would have one. The representatives are to be chosen for two years. In this space, when it is considered that their residence is from two hundred to five [hundred?] miles from their constituents, it is difficult to suppose that they will retain any great affection for the welfare of the people. They will have an army to support them, and may bid defiance to the clamours of their subjects. Should the people cry aloud the representative may avail himself of the right to alter the time of election and postpone it for another year. In truth, the question before the people is, whether they will have a limited government or an absolute one? …

Just a quick not: There are Constitution Projects for other states as well. Check this Link at the Institute On The Constitution to see if there is a project that you can participate in.

3. Seattle Mayor Durkan: “We’re Better Off Than We Thought”

Statist Religion vs God and Liberty

2. BOSTON, October 4, 1790. To The Vice-President Op The United States. A letter. From Life and Public Service of Samuel Adams, Volume 3 commencing on page 318.

3. New York, October 18, 1790. To The Vice-President Op The United States. A letter. From Life and Public Service of Samuel Adams, Volume 3 commencing on page 320.

4. The Supremacy of God’s Moral Law

Comments Off on Episode 323: Statist Religion vs God and Liberty