Fulfilling W. Z. Foster’s Strategy: Roe and Riots in the Streets. An Analysis of ‘The American Road to Socialism’ 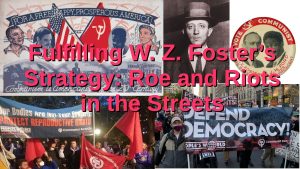 Video can be watched at: Rumble, Brighteon or YouTube

W. Z. Foster was the protagonist leading the early strategies that has brought us almost a decade of riots in the streets. This week I take you into the rhetoric of Foster which gave 1st Amendment credence to justify the U. S. Supreme Court to allow socialism and communism to secure its place as the change agent of governance, social, economic and political policy in these United States.

Initially I was going to write this as a separate article in connection to the recent Roe decision but time gets away when having many tasks on the schedule. Therefore you get the gist of the meat in the program instead.

With that, the riots over the reversal of Roe and the true insurrection by pro-abortion dupes, Antifa and other groups in various cities across the nation are the defenders of ‘peoples democracy’ against the restoration of Federalism. These protests and riots have been absolutely predictable. For several decades, I have been discussing as well as predicting the actions of the abortion activists and all those associated with what is called the ‘left.’ My point of this commentary on W. Z. Foster is not to add to the plethora of explanations respecting a Constitutional Republic and the true workings of Federalism but to again answer all those still asking ‘what happened and why?’

The reality is that the general public as well as the conservative movement do not want to admit that all the information leading up to the present riots in the streets has been in our faces for decades. I want you to think about what should have been a serious warning from William Z. Foster in his work ‘The American Road to Socialism: END_OF_DOCUMENT_TOKEN_TO_BE_REPLACED

Comments Off on Episode 355: Fulfilling W. Z. Foster’s Strategy: Roe and Riots in the Streets

January 6th Not the Primary Insurrection 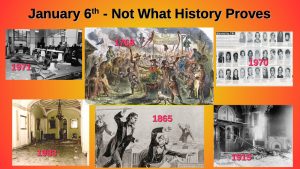 I wanted to comment on January 6th from a perspective that I have heard but a very, very few others say anything about. There is much to do in calling January 6th an ‘insurrection.’ Yet words have meanings and the word usage does not match what history tells us about the real attacks on the federal capital. Nor does the narrative of the day properly use the word ‘insurrection’ where it should be respecting the events of the last few years or the incitements of radical professors leading ‘insurrections’ on campuses and local communities.

The truth of all that is being yapped about concerning ‘insurrection’ is rooted in that first action when Lucifer made his play to take the throne room. (Isaiah 14:12 and 14) With that and the Fall of Adam and Eve, well, mankind are set to follow the example of Lucifer to see power and take it, hold it and use all methods to do both. The purpose of good Constitutional governance is to keep our natural human sinful natures in check. END_OF_DOCUMENT_TOKEN_TO_BE_REPLACED

Comments Off on Episode 333: January 6th – Not What History Proves 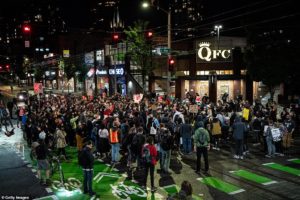 The 1771 Candidus article strikes hard against allowing our Liberty to be Lost. Sam comments, ‘The truth is, All might be free if they valued freedom, and defended it as they ought. Is it possible that millions could be enslaved by a few, which is a notorious fact, if all possessed the independent spirit of Brutus, who to his immortal honor, expelled the proud Tyrant of Rome, and his “royal and rebellious race?” If therefore a people will not be free; if they have not virtue enough to maintain their liberty against a presumptuous invader, they deserve no pity, and are to be treated with contempt and ignominy.’ Over the last fifty years, I put the Republican Party in the context of lacking virtue enough to maintain our liberty. A recent example of not understanding Foundational freedom is the ‘Republican-led Committee Passes Elizabeth Warren’s Amendment to Rename Military Bases’ END_OF_DOCUMENT_TOKEN_TO_BE_REPLACED