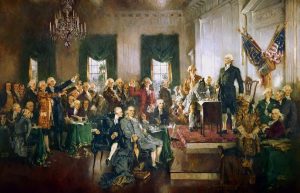 The concern regarding emigration from the eastern states to the west as well as their term of ‘foreigners’ meaning immigrants arriving, Not assimilating, and then becoming elected, which would then destroy our religion, morality and virtue. During the Convention Debates Pennsylvania was used as an example of this very destruction occurring. END_OF_DOCUMENT_TOKEN_TO_BE_REPLACED