Samuel Stillman, The Duty of Magistrates (1779) 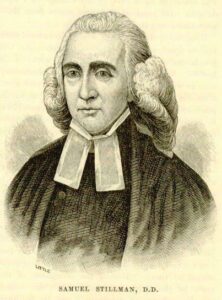 will engage in the political arena like Rev. Stillman. There is few to none in Christian education, be they seminary or Christian college/university that even teach these Foundational sermons. Hence we have the political elite and political parties that are dysfunctional with no intent to return to the Foundational Principles. As we see, the new 2021 federal administration is ‘Cancelling’ our history and rewriting it according to ideologies contrary to those spoken and written in this sermon and other Foundational text.

Can you remotely imagine a sermon of this content, authority and direction being preached before a State or Federal court let alone a Supreme Court?] The reality is that Magistrates no longer understand their Duty to God nor to the People.]

Hear the full Introduction at this Link

EDITOR’S NOTE: This discourse was preached before the Supreme Court of Massachusetts in 1779. It contains quotations from political philosopher John Locke (1632-1704). The election sermon’s author, Samuel Stillman (1737-1807) was an American Revolutionary minister, a trustee of Brown University from 1764-1807, a member of the American Philosophical Society, and (according to editor Frank Moore), “a member of the Senate Convention for the formation of the state constitution in 1779; as also for the adoption of the federal constitution in 1788; in the last body he delivered a very eloquent speech in its support, and was considered at the time as having contributed much toward its adoption, and confirmed many members in its favor who were previously wavering upon that question. To that constitution he ever after continued a firm, unshaken friend, and a warm approver of the administration of Washington and Adams.”

Sermon, together with a biographical sketch (slightly abridged, with incorporation of footnotes into the text) is from: Frank Moore, editor, The Patriot Preachers of the American Revolution, with Biographical Sketches, 1766-1783 (n.p.) (1860), pp. 258-288.]

Read the full text of the sermon: The Duty of Magistrates

Comments Off on The Duty of Magistrates (1779)