Episode 366: Reviewing Doug Wilson’s Primer on Christian Nationalism From the Mirrors of History

In preparation for this week, I was rereading ‘The Pulpit Of The American Revolution: Or, The Sermons Of The Period Of 1776, With A Historical Introduction, Notes, And Illustrations. By John Wingate Thornton, A.M.,’ and the Vlog of Doug 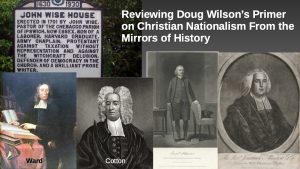 Wilson’s Primer on Christian Nationalism popped up on my video feed. Well, this really got my hair curled as I listened to Pastor Wilson echo the words of John Wingate Thornton’s Preface and Introduction to his work on these founding sermons.

I do not intend to do a frame by frame review of Doug Wilson’s Primer on Christian Nationalism but I do intend to take you through the mirrors of history regarding those reflections of then for the solutions of our present. I do expect that you shall review the Vlog of the Primer on Christian Nationalism after either listening to this programs podcast or watching the video.

Confessions and the Loss Guidance of Continuity

I had to take a short moment to comment on the references that were made in the Primer on Christian Nationalism regarding the American changes in the Westminster Confession. What I can attest to from having participated in various denominations, including charismatic ones, is that there is a loss of guiding continuity in what was Christian participation in government.

To me, after a deep study of the Reformation, the comparison of the Westminster Confession by Pastor Wilson hits the nail on the head for bureaucrats and elected persons at any level of government. The following is what I believe is a very important, the missing principles that once were inculcated in our Founding era where in the Westminster Confession. For the greater part of modern Christianity — This is not taught or for that matter, any of the foundational Confessions are not taught.

‘Civil magistrates may not assume to themselves the administration of the Word and sacraments [1]; or the power of the keys of the kingdom of heaven [2]; or, in the least, interfere in matters of faith [3]. Yet, as nursing fathers, it is the duty of civil magistrates to protect the church of our common Lord, without giving the preference to any denomination of Christians above the rest in such a manner, that all ecclesiastical persons whatever shall enjoy the full, free, and unquestioned liberty of discharging, every part of their sacred functions, without violence or danger. And, as Jesus Christ hath appointed a regular government and discipline in his church, no law of any commonwealth, should interfere with, let, or hinder, the due exercise thereof, among the voluntary members of any denomination of Christians, according to their own profession and belief. It is the duty of civil magistrates to protect the person and good name of all their people, in such an effectual manner as that no person be suffered, either upon pretence of religion or of infidelity, to offer any indignity, violence, abuse, or injury to any other person whatsoever: and to take order, that all religious and ecclesiastical assemblies be held without molestation or disturbance.’

The Essence of Then and Now

Let me have you ponder a key quote from Doug’s Vlog / blog for this episode:

Now, to the essence of then, being the Founding Era, and now as presented by Doug Wilson’s modernized unabashed raconteur in the Primer on Christian Nationalism. The following Quotes are from the Preface and Introduction of Thornton:

‘The true alliance between Politics and Religion is the lesson inculcated in this volume of Sermons, and apparent in its title, ‘THE PULPIT OF THE REVOLUTION.’ It is the voice of the Fathers of the Republic, enforced by their example. They invoked God in their civil assemblies, called upon their chosen teachers of religion for counsel from the Bible, and recognized its precepts as the law of their public conduct. The Fathers did not divorce politics and religion, but they denounced the separation as ungodly.’

‘The Union of the colonies was a condition precedent to American Nationality. One nationality, and that of a Protestant people, was essential to constitutional liberty in America. If the colonies had become separate independencies at different times, America would have but repeated the history ofEuropean divisions and wars.’

‘But a brief contest would have left danger of colonial disintegration; and the stupid obstinacy of George III. was necessary to prolong the war in order to blend the colonists, by communion under a national flag, in national feeling, and by general intercourse, common interests, and common sufferings. So God formed the fair Temple of American Liberty.’

‘In his Sermon of 1750, Jonathan Mayhew declared the Christian principles of government in the faith of which Washington, ordained of God, won liberty for America, not less for England, and ultimately for the world; so that the engraving of Mayhew and that of the Stamp fitly introduce these Sermons of the Revolution.’

‘THIS collection of Sermons presents examples of the politico-theological phase of the conflict for American Independence, a phase not peculiar to that period.’

‘There is a natural and just union of religious and civil counsels, not that external alliance of the crosier and sword called ‘Church and State,’ but the philosophical and union which recognizes GOD as Supreme Ruler,…’

‘It was well said in Stoughton’s Election Sermon, preached in 1668, that ‘God sifted a whole nation that he might send choice grain over into this wilderness.’ …’They were men of great renown in the nation from whence the Laudian persecution exiled them; their learning, their holiness, their gravity, struck all men that knew them with admiration. They were Timothies in their houses, Chrysostoms in their pulpits, Augustines in their disputations.’

‘The Rev. John Norton, in the Election Sermon of 1661, said that they came ‘into this wilderness to live under the order the;’ ‘that our polity may be a gospel polity, and of gospel may be compleat according to the Scriptures, answering fully the Word of God: this is the work of our generation, and the very work we engaged for into this wilderness; this is the scope and end of it, that which is written upon the forehead of New England, viz., the compleat walking in the faith of the gospel, according to the order of the gospel.’

I am challenging you to read the full Introduction to Thornton’s work ‘The Pulpit Of The American Revolution:’ As well as taking in the modern mirror of this historical work of Doug Wilson’s Primer on Christian Nationalism. With these two works in hand, the real challenge is to those who seek political or economic restoration for the Republic. Every pundit, political group, podcaster, national leadership and so on – will not succeed until they accept the full sovereignty of the Biblical God of the Reformation.

These sermons from the Pulpit of the American Revolution should echo from our modern pulpits such that political leaders will hold to their ‘Oath of Office’ with the intent to Serve God first and ensure that all law has His moral context.

I will leave you with this from the Introduction:

‘The historical fact was stated by President Stiles, of Yale College, in 1783: ‘It is certain that civil dominion was but the second motive, religion the primary one, with our ancestors, in coming hither and settling this land. It was not so much their design to establish religion for the benefit of the state, as civil government for the benefit of religion, and as subservient, and even necessary, towards the peaceable enjoyment and unmolested exercise of religion – of that religion for which they fled to these ends of the earth.’

The result of all this was, a new community, voluntarily gathered in New England, primarily for religion, organized into many ’independent’ churches, each of them a petty democracy, electing its officers and ministers, making its own laws, and regulating its own affairs, so far as possible, by the system of polity indicated with more or less distinctness in holy Scripture. Out of this condition of things the state was gradually developed. Here was individualism, – an admirable system for making good full-blooded Puritan citizens, but very poor and unmanageable subjects…’

While the generous Farmer has been employing his shining Talents, in awakning a Continent to a sense of the Danger their civil Rights are in from incroaching power: While it is grown fashionable, for men of ingenuity and public spirit, with a noble ardour, to warn us against a tame submission to the iron rods; and LIBERTY, LIBERTY, is the Cry: I con fess I am surpriz’d to find, that so little attention is given to the danger we are in, of the utter loss of those religious Rights, the enjoyment of which our good forefathers had more especially in their intention, when they explored and settled this new world.

To say the truth, I have from long observation been apprehensive, that what we have above every thing else to fear, is POPERY: And I now bespeak the solemn attention of my beloved Countrymen, to a course of Letters which I am preparing and propose to publish in your paper upon the momentous and melancholly subject. I expect to to be treated with sneer and ridicule by those artful men who have come into our country to spy out our Liberties; and who are restless to bring us into Bondage, and can be successful only when the people are in a sound sleep: from this consideration I hope my readers will not be offended, if I now, and then, cry aloud to them with a great degree of warmth and pathos: This I shall most certainly do, whether they will hear or whether they will forbear; for I cannot even now think on the subject without feeling my zeal enkindle. I know full well that it is farthest from the imagination of some of our solid men and pious Divines, whom I in tend particularly to address on the occasion, that ever this enlightned continent should become the worshippers of the Beast: But who would have thought that the oblig’d and instructed Israelites would so soon after they were delivered from the Egyptian Task-masters, have fallen down before a golden Calf! There is a variety of ways in which POPERY, the idolatry of Christians, may be introduced into America; which at present I shall not so much as hint at, but shall point them out hereafter in their proper order. Yet, my dear countrymen – suffer me at this time, in the bowels of my compassion to warn you all, as you value your precious civil Liberty, and everything you can call dear to you, to be upon your guard against POPERY. My fears of POPERY have induced me to travel thro’ this great continent as a spectator, to satisfy myself: And the more I know of the circumstances of America, I am sorry to say it, the more reason I find to be apprehensive of POPERY. Bless me! could our ancestors look out of their graves and see so many of their own sons, deck’d with the worst of foreign Superfluities, the ornaments of the whore of Babylon, how would it break their sacred Repose! But amidst my gloomy apprehensions, it is a consolation to me to observe, that some of our Towns, maintain their integrity, and show a laudable zeal against POPERY. To do honor to those Towns as much as in my power, I in tend to publish a List of them. And as I am not particularly attach’d to any Town in the province, but that which gave me birth, I am determin’d that if any others shall be rous’d by my future Lucubrations to oppose POPERY, as I trust and hope they will, they shall have the same Notice taken of them in another Paper.

Embedded in the body.

Comments Off on Episode 366: Reviewing Doug Wilson’s Primer on Christian Nationalism From the Mirrors of History