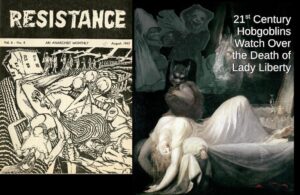 The Hobgoblins of Anarchy is a point of discussion that meets the folly of the celebrants of this day. Considering all the ghouls that are costumed to play various tricks with no treats the root of this essay by Samuel Bryan reverberates in the streets.

Bryan who wrote extensively as ‘Centinel’ says the following:

‘The evils of anarchy have been portrayed with all the imagery of language in the growing colors of eloquence; the affrighted mind is thence led to clasp the new Constitution as the instrument of deliverance, as the only avenue to safety and happiness.’

I would suggest substituting ‘new Constitution’ with ‘socialism / Marxism’ for our present time. This is in fact what the demon-crats and leftist are promoting. Bryan continues describing what is allowed withing the ‘new – 21st Century – Constitutionalism’:

‘To avoid the possible and transitory evils of one extreme, it is seduced into the certain and permanent misery necessarily attendant on the other. A state of anarchy from its very nature can never be of long continuance; the greater its violence the shorter the duration. Order and security are immediately sought by the distracted people beneath the shelter of equal laws and the salutary restraints of regular government; and if this be not attainable, absolute power is assumed by the one, or a few, who shall be the most enterprising and successful. If anarchy, therefore, were the inevitable consequence of rejecting the new Constitution, it would be infinitely better to incur it, for even then there would be at least the chance of a good government rising out of licentiousness.’

I know, you are saying ‘pump the brakes’ on the idea that anarchy is preferred over the Constitution? No, what Bryan was describing in this essay that I will be discussing on the program is that ultimately under that bad implementation of Constitutionalism and the evils that persist amongst mankind, The Constitution of 1787 could make a way available for the insidiousness that are the Hobgoblins of Anarchy that roam the hall of Congress, State Legislatures, Bureaucratic Agencies, the Courts and the streets of almost every State.

A fundamental note followed by another quote is that with the leftists/socialists/jihadists/marxists wanting to ‘fundamentally change these United States,’ their ideology and methods of governing would lead to further ever-present despotism than what we are experiencing State by State because of the ChicomFlu.

These next two article are worth the time to read since they are a direct application of what Centinel was writing about but the application is as I have modernized it to design and implementation of Marxism in these United States. The headlines should wake every God fearing American to action and with only one choice at the ballot box, “Donald Trump.” Otherwise the consequence are more intolerable then the unsuspecting normal citizen could imagine.

1. WATCH – Joe Biden: In ‘Five Days … We Literally Are Going to Change the Course of this Country for Generations to Come’

The point I want to drive home is that like Centinel arguing of the potential evils of the Federal Constitution, I would apply the following predictive language to the intentions of the demon-crats in this 2020 election cycle:

‘But to rush at once into despotism because there is a bare possibility of anarchy ensuing from the rejection, or from what is yet more visionary, the small delay that would be occasioned by a revision and correction of the proposed system of government is so superlatively weak, so fatally blind, that it is astonishing any person of common understanding should suffer such an imposition to have the least influence on his judgment; still more astonishing that so flimsy and deceptive a doctrine should make converts among the enlightened freemen of America, who have so long enjoyed the blessings of liberty. But when I view among such converts men otherwise pre-eminent it raises a blush for the weakness of humanity that these, her brightest ornaments, should be so dimsighted to what is self-evident to most men, that such imbecility of judgment should appear where so much perfection was looked for. This ought to teach us to depend more on our own judgment and the nature of the case than upon the opinions of the greatest and best of men, who, from constitutional infirmities or particular situations, may sometimes view an object through a delusive medium; but the opinions of great men are more frequently the dictates of ambition or private interest.’

Dissentions Among the States

When we consider the Hobgoblins of Anarchy in our present times, we must understand that the politicians and career bureaucrats hide the reality of being fearsome creatures. No, these modern Hobgoblins are not mythology. They are the wretches of ideologies contrary to Foundational Truth. And in our streets we have the imp pawns who as the minions of the designing and licentious planners, attack all aspects of morality and normalcy for the demise of this Constitutional Republic.

And the various States whose leading people are indoctrinated in ‘The evils of anarchy having been portrayed with all the imagery of language in the growing colors of eloquence’ and the pseudo virtues of tolerance, inclusivism, egalitarianism, multiculturalism, and environmentalism.

The fact remains as I will restate from Centinel:

‘The source of the apprehensions of this so much dreaded anarchy would upon investigation be found to arise from the artful suggestions of designing men, and not from a rational probability grounded on the actual state of affairs.”

Since Adam and Eve were driven from God’s plan due to their fall, the plotting of others to instill a power elite is active to this very moment as we even look to November 3rd. A larger point that we face to day is what Centinel wrote in the aggregate summarized in this statement by Richard M. Gamble in a January 2000 article: ‘Centinel asked for time to debate, revise, and “correct” the Constitution, not to destroy it. His central concern was that once lost, liberty would never be regained, and once gained, power would never be relinquished.’

What is at stake this very week is not about an energetic Constitution but the total destruction of Constitutionalism by the already embedded socialists/globalists/communists in all levels of government and bureaucracies.

The essays by Centinel (Bryan) are very appropriate to our present time in that three touchstones can be brought forward from 1787 to the present as summarized once again by Richard M. Gamble:

‘In step with Antifederalist themes, he (Bryan) blasted the new frame of government as a conspiracy of the “well-born few” to enslave the many, a stealthy and calculated attempt to found a despotic empire by means of unwarranted innovations in government, contrary to the history, habits, and sentiments of the American people.’

1. A conspiracy of the “well-born few” in this case are the collegiate elite or as Thomas Sowell calls them ‘The Intellectuals’ as well as the deep staters that contrive the bureaucracies and a shadow government.

2. Founding a despotic empire as the global socialists/Marxists have been contriving for the last 170 years.

3. The unwarranted innovations of socialism/Marxism/globalism that is contrary to our Foundational history and especially the sentiments of the American people’s DNA.

Other Stuff this week

1. Senate Confirms Amy Coney Barrett for Supreme Court – this is highly covered and it is huge!

4. Fighting Back on the Culture Wars – The DOJ’s Lawsuit Against Yale Is How To Win The Culture War – the Federalist

5. John Piper’s No Vote controversy – There is a number of responses to the non-political comments of John Piper. Once again I appreciate how Doug Willson comment with ‘John Piper, Me, and the Cool Shame Election’ and ‘A Second Round on John Piper, Me, and the Cool Shame Election.’ My comment on this is for 90% of evangelicals and the pastors that lead them – They have violated Biblical trust for 30+ years by walking away from the extensible Gospel, which reaches into and has authority over all aspects of life and to which Christians should lead not give over to the Godless.

7. The only ones really reporting on Anarchy in America comes from Israel via – Arutz Sheva article: Who’s behind the violent seditious anarchy across America?

8. What’s in a name? Are Biden and Cuomo synonymous? New York Gov. Andrew Cuomo Reaped $6.2 Million In Campaign Cash From 347 State Vendors Who Pocketed $7 Billion Since 2014

10. How To Stop Schools From Replacing True Virtue With Leftist Virtue Signaling, By Louis Markos, the Federalist, OCTOBER 27, 2020

THE HOUSE OF REPRESENTATIVES OF MASSACHUSETTS TO BENJAMIN FRANKLIN.

‘… It was particularly mortifying to us to see the whole system of civil authority in the province, yielding to this most dangerous power; and at the very time when the interposition of the civil magistrate was of the most pressing necessity, to check the wanton and bloody career of the military, the Lieutenant-Governor himself declared, as Governor Bernard had before, that “he had no authority over the King’s troops in the province,” and his Majesty’s representative in Council became an humble supplicant for their removal out of the town of Boston! What would be the feelings of our fellow-subjects in Britain, if contrary to their Bill of Rights, and indeed to every principle of civil government, soldiers were posted even in their captial, without the consent of their Parliament? And yet the subjects of the same Prince in America who are entitled to the same freedom, are compelled to submit to as great a military power as administration shall please to order to be posted among them in a time of profound peace, without the consent of their assemblies! And this military power is allowed to trample upon the laws of the land, the common security, without restraint! Such an instance of absolute uncontroul’d military tyranny must needs be alarming, to those who have before in some measure enjoy’d, and are still entitled to the blessings of a free government, having never forfeited the character of loyal subjects.’

1. Most references embedded in newsletter.

3. The Letters of Centinel: Attacks on the U.S. Constitution, 1787-1788 by Samuel Bryan edited and introduced by Warren Hope, by Richard M. Gamble, January 1, 2000, Foundation for Economic Education