11-7-20 Political Theology: Enemies In The Pulpits 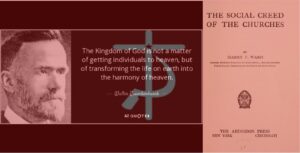 Enemies Within the Pulpits is not a new phenomena. The substance of this newsletter and radio program is not to focus on any type of exposé on schism or theological wack-a-doodle stuff. No, the Enemies Within the Pulpits have been discussed and warned about for over one hundred years. Thereby, I can conclude, that based on the preaching at the foundation of these United States from the First Great Awakening to our present time, that a great number of Pulpits are in fact NOW, in 2020, the cause of the confusion in this election and our American society on the whole.

Now there are a number of pastors in their respective congregations that understand that all of living for now and eternity is political. They get it and speak the truth of the extensible Gospel.

For this program, I’m simplifying deep theology to: all politics is religious and holds to the theology of that religion and that religions god. The question of the eons is rendered down to – Who is the god of your political religion? I have put a link to a lecture in the references that goes into more detail on this and with a better explanation then I’m willing to give since we only have 45 minutes for the program/podcast.

Now. Getting back to the Enemies Within the Pulpits. The references presented for this program and the documentation that will be linked on the blog post – establish timelines, names names, shows intent, group associations all pointing to our present – the instantiation of ‘Christian’ Socialism. The information is such that it opens the blinds on how ‘Christian’ Socialism, the social gospel, and critical race theory are so well blended into the norms of church affiliations that it has allowed for the Pulpits to justify voting for democrats. With this documentation are more instances of the full subversion of the democrat party to socialism/Marxism.

Just a note – the sources are not tinfoil hat conspiracy mumbo-jumbo. What I am presenting is what reputable persons have researched and spoken of for well over eighty years.

Consider that ‘Tactically’ noted in the 1934 work titled ‘The Red Network’, many who were and still are studying for the Pulpit have fallen under the methodologies of not only ‘What is Red’ but more so now, the same mind enslaver of ‘critical race theory’:

‘This Socialist method, says Hearnshaw, is “the method of sapping rather than assault; of craft rather than force; of subtelty rather than violence. ‘Permeation’ has been their watchword. . . . Above all they have tried to bemuse the public mind into the belief that ‘socialism’ and ‘collectivism’ are synonymous terms; and that all they are aiming at is a harmless and beneficent extension of state and municipal enterprise.”

Definition for Permeation: spread throughout (something); pervade

WARNING: Don’t expect all of this on the program.

Just be prepared that what may be the content on the program most likely will not have all this content a part of it. Remember, the program is only 45 minutes. In reality, most folks get exhausted even reading at this point. Nope…. This isn’t a Twitter feed.

I get very frustrated on segregation in the Body/Bride of Jesus but, Bad Political Theology is a product of Bad Theology. This Pew Research article is commensurate with ‘social gospel/critical race theology’ and the 2020 vote distribution. I don’t like the report title but it is what it is: ‘White Christians continue to favor Trump over Biden, but support has slipped’ and it has a solid margin of fact to it.

I’m not belaboring on the stench of the condition of generalized religion here but the reality, again, of the eons is ‘who is the god of your political religion?’

As much as I want to put the gloves and do a workout on a Krav Maga heavy bag or a Brazilian JJ grappling dummy pretending they are the social gospel/critical race theologians…. I have to leave the enunciation of the modern thought battle to the deep theologian’s such as Dough Wilson and the solid Christian intellectuals like Jacob Brunton and Cody Libolt.

It seems that I can never keep it simple.

To get folks to deep dive and then rise to action is: The balance of striking ones emotion nose without blooding it and just out right getting the cattle prod. The appeal of history and the lessons to be learned from it have been proven to be relatively insignificant when the course of actions seem to be repetitiveness of the past history.

The simple answer to this is what the Anti-federalist clearly and generally wrote about. That being that mankind is sinful, proven by history, and that the Pulpit could/would be corrupted, proven by history and the present – Yet the hope was that there would be Pulpits that produced moral and virtuous leaders – whereby this would keep us from the scourge of tyranny and despotism.

This week Sam Defers to Agrippa and a point as to how Religion and Morals are lost.

‘To the People. We come now to the second and last article of complaint against the present confederation, which is, that Congress has not the sole power to regulate the intercourse between us and foreigners. Such a power extends not only to war and peace, but to trade and naturalization. This last article ought never to be given them; for though most of the states may be willing for certain reasons to receive foreigners as citizens, yet reasons of equal weight may induce other states, differently circumstanced, to keep their blood pure. Pennsylvania has chosen to receive all that would come there. Let any indifferent person judge whether that state in point of morals, education, energy is equal to any of the eastern states; the small state of Rhode-Island only excepted. Pennsylvania in the course of a century has acquired her present extent and population at the expense of religion and good morals. The eastern states have, by keeping separate from the foreign mixtures, acquired, their present greatness in the course of a century and an half, and have preserved their religion and morals. They have also preserved that manly virtue which is equally fitted for rendering them respectable in war, and industrious in peace.’

All the Anti-federalist Letters of Agrippa can be found at: http://constitution.org/afp/agrippa.txt

This lecture hits many of today’s points to which I’ve spoken about for years. It is better articulated here – Great Lecture on: Republics & Democracies | Douglas Wilson | Grace Agenda 2020

1. THE RED NETWORK, A “Who’s Who” and Handbook of Radicalism for Patriots, by Elizabeth Dilling

2. None Dare Call It Treason, by John Stormer

8. Pew Report: White Christians continue to favor Trump over Biden, but support has slipped, By gregory A. Smith

11. The Social Creed Of The Churches By Harry F. Ward

12. First We Defend Law, Then We Defend Life: What the Pro-Life Movement Needs After Decades of Failure

14. Communist Party USA: ‘Working with the Democratic Party’ is key

****There is so much info on Critical Race Theory and the controversy in Christianity that it is more than you would even look at. Let it be noted that those who accept CRT are the resultants of the core points of this program…. Duped or willful co-conspirators.

Comments Off on 11-7-20 Political Theology: Enemies In The Pulpits