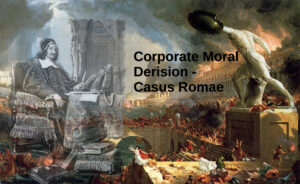 Something I found was written by historian Will Durant – “A great civilization is not conquered from without until it has destroyed itself within. The essential causes of Rome’s decline lay in her people, her morals, her class struggle, her failing trade, her bureaucratic despotism, her stifling taxes, her consuming wars.”

In a search of history and societies, the definition and implementation of morals and ethics is the tap root in the rise and fall of those nations. The root to these United States rise was the most simple and common belief that is foundational as written by Baxter – “All government of men, is subservient to the government of God, to promote obedience to his laws.” Following this in the references below, Douglas aggregates thoughts that are no longer common in American political thinking let alone in the business world:

“Moreover, Baxter showed great admiration for political theoreticians who defended this view (just stated): “They convinced me how unfit we are to write about Christ’s Government, and Laws and Judgment, etc., while we understand not the true nature of Government, Laws and Judgment in the general, and that he that is ignorant of Politics and of the Law of Nature will be ignorant and erroneous in Divinity and sacred scripture.”

Gee, We don’t think, act or talk about the real purposes of government which was the root of Liberty as our Founders actually lived it.

On the program tomorrow, my discussion of Corporate Moral Derision is really the focus. Have been in the corporate world as an executive, I can walk the path of business morals and ethics from the boardroom to the bath room. Sometimes the former residing in the latter to our present where business are dictating individual behavior and beliefs through product manipulation and determining who can participate in the marketplace.

Additionally, Corporate Moral Derision has become the political oligarchs that determine what government should be such that they are intent on eliminating Foundational Constitutionalism for their Marxist – Fascist beliefs of governing.

Lastly in the spirit of keeping it short and hoping you will tune into the program, Douglas in reference 11.a. below makes this observation that transcends business and politics, again we have dumped this fundamental over the last 100 years, especially in the pulpits and academics:

“Baxter maintains that in its basic structure, society is hierarchical and theocratic. In ultimate terms there could be no authority independent of God. Within society, it resides in three main spheres: the Church, the State, and the family. In each of these, the one who exercises authority receives his right to do so from God. Once this is acknowledged, this individual’s command to rule must then be respected and obeyed.

But neither is the ruler himself free from obedience. His divinely delegated duties impose upon him a discipline and a responsibility which make him answerable to God. Baxter never ceases to emphasize that man in every situation of life is some how dealing with God.”

And to think, I have not even brought any perspective of that great modern writer John Witherspoon into the discussion. Oh, for more time!

Since the Citizenry is captivated more by economy than Liberty, the Corporate Moral Derision has been codified such that there are more laws on the books in the various states and federally, which give the ‘corporation’ more rights than the individual. I discuss this and give you references to ponder in respect to ‘what’s in your pocket’ vs Liberty.

Yes, government will use economy and corporate moral derision to implement the chicom vaccine.

Will You Resist and to What Extent?

This will be the question of 2021. But first you must answer: Who is your Sovereign?

Sam is deferring to John Whitherspoon who was a close contemporary during the Continental Congress and War Congress. They sat on a number of committees together.

From the Lectures on Moral Philosophy:

Section on: Rights of Necessity, and common Rights.

Were a man perishing with hunger, and denied food by a person who could easily afford it him, here the rights of necessity would justify him in taking it by violence. Were a city on fire, and the blowing up of an house would save the far greater part, though the owner was unwilling, men would think themselves justified in doing it whether he would or not. Much more would men in cases of urgent necessity make free with the property of others without asking their consent, but presuming upon it.

In our own government, where, by the love of liberty general among the people, and the nature of the constitutions as many particulars have been determined by special laws as in any government in the world—yet instances of the rights of necessity occur every day. If I see one man rob another upon the highway, or am informed of it, if I have courage and ability I pursue the robber, and apprehend him without any warrant, and carry him before a magistrate to get a warrant for what I have already done. Nothing is more common in Britain than to force people to sell their inheritance or a part of it, to make a road or street straight or commodious. In this instance it is not so much necessity as great utility.

The question of the greatest moment here is, whether the establishing these rights of necessity does not derogate from the perfection and immutability of the moral laws. If it be true, that we may break in upon the laws of justice for the sake of utility, is not this admitting the exploded maxim, that we may do evil that good may come. I answer, that these rights of necessity have in general property as their object, or at most the life of particular persons—and it seems to be inseparable from the establishment of property in the social state, that our property is to be held only in such manner, and to such a degree, as to be both consistent with, and subservient to, the good of others. And therefore these extraordinary cases are agreeable to the tacit or implied conditions of the social contract.’

Don’t think the Witherspoon is saying it is ok to force necessity by arbitrary decision like a vaccine. You have to read the whole section but he does make this point:

‘If the law described circumstantially what might be done, it would be no longer a right of necessity, but a legal right. To forbid them by law would be either ineffectual or it would abolish them altogether, and deprive the society of the benefit of them when the cases should occur. Things done by the rights of necessity are by supposition illegal, and if the necessity does not excuse, the person who pretends them may be punished. If I am aiding in pulling down a man’s house on pretence of stopping a fire, if he afterwards makes it appear that there was not the least occasion for it, or that I, being his enemy, took the opportunity of this pretence to injure him, he will obtain reparation.

As property, or at most life is concerned in the rights of necessity—Still the moral laws continue in force. Whatever expresses an evil disposition of mind does not fall under the rule, because it can never be necessary to the doing of any good. The pretence of its being necessary in some cases is generally chimerical (def = hoped for but illusory or impossible to achieve), and even were it real, the necessity could not justify the crime—as suppose a robber very profane should threaten a man with death unless he would blaspheme God or curse his parents, &c.’

1. Can your employer require you to take a COVID-19 vaccine? – Marketwatch

2. Can Your Employer Require You to Get a COVID-19 Vaccine? – AARP

3. Can employers force their employees to take the coronavirus vaccine? – msn news

6. Who is Maven? Seattle-based media company under microscope after Sports Illustrated layoffs – GeekWire

10. The Protestant Ethic and the Spirit of Capitalism – By Max Weber

11.a. Politics And Theology In The Thought Of Richard Baxter Part II “Walter B. T. DouglasAndrews University”

13. Yes, some Americans may be required to get a COVID-19 vaccine but not by the federal government. – USA Today