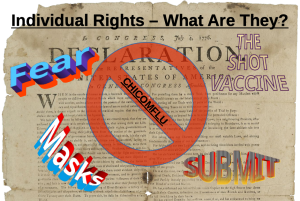 Individual Rights are flippantly tossed around from water-cooler conversations to the roar of pundits and barking across social media. Worse, the political class uses ‘rights’ as a mechanism for manipulation of the population in general.

This week I dig into not only what Sam Adams had to say about Individual Rights but also the essence of meaning from Creation itself.

I have had it with both Republican and Democrat Parties yapping about ‘Individual Rights’ when they are not defining them from a Foundational perspective nor are they protecting them for what they actually are.

Take Ohio for example, the former head of the State Republican Party is now a candidate for the Ohio US Senate and yet she did nothing to call the Republican Governor to accountability for his arbitrary and pernicious despotism related to the ChicomFlu mandates. If this political party actually believed in ‘individual rights,’ they would not have and continue to trample all over them with fear, fraud and mistakes of manipulating truth. The regard for fundamental individual rights is not in the remotest neuron in the minds of the political class.

And forget the Democrat Party, they are 100% sold out to humanism with all its ‘ism’ derivatives that individual rights is a play-toy for despotism and tyranny.

Why is the over-reach of the Bureaucratic State with its executioners, the Executive Branch of government, able to subvert Individual Rights? It is partially because the Citizenry has been lulled into the misunderstanding of what ‘Individual Rights’ are. Sam Adams noted this in “The Rights of the Colonists As Men”:

In short, it is the greatest absurdity to suppose it in the power of one, or any number of men, at the entering into society, to renounce their essential natural rights, or the means of preserving those rights; when the grand end of civil government, from the very nature of its institution, is for the support, protection, and defence of those very rights; the principal of which, as is before observed, are Life, Liberty, and Property. If men, through fear, fraud, or mistake, should in terms renounce or give up any essential natural right, the eternal law of reason and the grand end of society would absolutely vacate such renunciation. The right to freedom being the gift of God Almighty, it is not in the power of man to alienate1 this gift and voluntarily become a slave.

Now the real ownership for the over-reach of government is on US as individuals. Yup, giving up essential natural rights in fear such that the Governor in Ohio is claiming that his mandates are law and that to return to ‘normal,’ all citizens must get the unproven shot. Has anyone bothered to check what his family investments are in the all the companies that are tied to his mandates? No and they won’t.

What so often occurs in these modern times is that the words ‘inalienable rights’ and ‘individual rights’ become mush in the chewing twist of an ideological pretzel. This chewed mush is once again the result of many pulpits and every level of education being collaborators with the voluntary enslavement of the citizenry.

Sam Adams has much to say about our natural individual rights but this statement again from the “The Rights of the Colonists As Men” should help us take charge in how even local governance acts:

“Just and true liberty, equal and impartial liberty,” in matters spiritual and temporal, is a thing that all men are clearly entitled to by the eternal and immutable laws of God and nature, as well as by the law of nations and all well-grounded municipal laws, which must have their foundation in the former.

Ok, I have to stop belaboring the point in this not so short program promo or you won’t go and listen to the program itself.

The fact is that if you and all the Citizenry truly understood your ‘individual rights’ then you would have stopped, in particular, the local and state governments tyranny – You would unmask and open your community as it was prior to the ChicomFlu tyranny. You would not have freely succumbed and given up your rights driven by fear, fraud and mistakes.

Will the Individual Rights granted by God be kept or will the man created entity of government force its will on the Citizenry. Unlike the Founding era, there is no Unanimity among the Citizens of a community let alone in a State or across these United States. Heck, there is no unanimity in families or churches.

Such is the travesty of our present time – Americans don’t know how to be on the same page as to what their natural individual rights are.

The government mandates have gone past any sense of reason. The data is manipulated, especially in Ohio and noted in the Post De-Presser debriefs. Worse now, the Ohio Governor insist his mandates are law. That is pure despotism. Sadly, the Legislature is not focused on ‘individual rights’ and is willing to allow tyranny to reign. It is time for local governments, The Lesser Magistrates, to check the tyranny. Township Trustees Must force the county health boards to follow the factual data. County commissioners Must act for the liberty of the Citizenry.

Sadly, the people (the Citizenry) live in the fear perpetrated on them and will not support those that would act in the best interests of the those who gave up their individual rights for a false sense of safety.

Just remember, the political party leadership particularly the Republicans, at all levels, are cowards and are about political power and not securing individual rights and liberties.

The opening paragraphs of “Loyalty and Sedition”

But we oftentimes perceive such significations assumed by those who find the wrong use of the words conducive to the increase of power or gain, that it is difficult to tell whether loyalty is really commendable or sedition blameworthy. True loyalty in the sense just now explained is the beauty and perfection of a well-constituted state. It cannot indeed subsist in an arbitrary government, because it is founded in the love and possession of liberty. It includes in it a thorough knowledge of our Constitution, its conveniences and defects as well as its real advantages; a becoming jealousy of our immunities, and a steadfast resolution to maintain them. It delights in the quiet and thankful enjoyment of a good administration, and it is the scourge of the griping oppressor and haughty invader of our liberties.

But sedition is founded on the depraved and inordinate passions of the mind : it is a weak, feverish, sickly thing, a boisterous and unnatural vigor, which cannot support itself long, and oftentimes destroys the unhappy patient. It proceeds from gross mistake or great wickedness, from lust of power or gain, in the first promoters of it, and from untamable obstinacy and a vitiated palate that cannot relish the happiness of a free state in the creatures of their designs.

It is a very great mistake to imagine that the object of loyalty is the authority and interest of one individual man, however dignified by the applause or enriched by the success of popular actions. This has led millions into such a degree of dependence and submission, that they have at length found themselves to homage the instruments of their ruin at the very time they were at work to effect it. The true object of loyalty is a good legal constitution, which, as it condemns every instance of oppression and lawless power, derives a certain remedy to the sufferer by allowing him to remonstrate his grievances, and pointing out methods of relief when the gentle arts; of persuasion have lost their efficacy. Whoever, therefore, insinuates notions of government contrary to the constitution, or in any degree winks at any measures to suppress or even to weaken it, is not a loyal man. Whoever acquaints us that we have no right to examine into the conduct of those who, though they derive their power from us to serve the common interests, make use of it to impoverish and ruin us, is in a degree a rebel — to the undoubted rights and liberties of the people. He that despises his neighbor’s happiness because he wears a worsted cap or leathern apron, he that struts immeasurably above the lower size of people, and pretends to adjust the rights of men by the distinctions of fortune, is not over loyal. He that aggravates beyond measure the well-meant failings of a warm zeal for liberty, he that leaves no stone unturned to defend and propagate the schemes of illegal power, cannot be esteemed a loyal man. Indeed, the reverse use of these words may possibly find authorities in some parts of the world where language and sense are deluged in the torrent of arbitrary power.

1. LONAG topic: Civil Disobedience In an Age of Tyranny: THE GRAND BARGAIN THAT NEVER WAS

2. Dr. Tal Zaks, the chief medical officer at Moderna Inc., explained in a 2017 TED talk – Moderna’s Top Scientist: ‘We Are Actually Hacking The Software Of Life’

3. Libertarian Christianity: Although Wikipedia is not my first trusted source, this is a really good synopsis.

5. Of the Natural Rights of Individuals – James Wilson, 1790

1. This is a legal term meaning – to transfer ownership of (property rights) to another person or group.