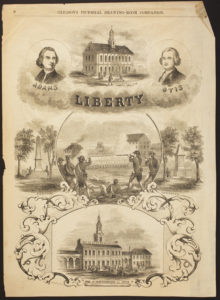 Being the Father of the American Revolution, Samuel Adams was asked to give his perspective on why the Declaration of Independence came into being. He was also asked to elaborate on what it meant for the development of a new nation and the expectation of patriotism.

Sam speaks not just in a political sense but develops the reality that government is the creation of God for the good of mankind. He shows that despotism and tyranny are contrary to God’s sovereignty and must be resisted since we cannot give up our rights.

I boldly beseech you to read the complete speech to be found in this link: August 1, 1776 Speech

I leave you with this Samuel Adams Wisdom from the Speech:

‘And, brethren and fellow-countrymen, if it was ever granted to mortals to trace the designs of Providence, and interpret its manifestations in favor of their cause, we may, with humility of soul, cry out, Not unto us, not unto us, but to thy name be the praise. The confusion of the devices among our enemies, and the rage of the elements against them, have done almost as much towards our success as either our councils or our arms.

The time at which this attempt on our liberties was made, when we were ripened into maturity, had acquired a knowledge of war, and were free from the incursions of enemies in this country, the gradual advances of our oppressors enabling us to prepare for our defence, the unusual fertility of our lands and clemency of the seasons, the success which at first attended our feeble arms, producing unanimity among our friends and reducing our internal foes to acquiescence – these are all strong and palpable marks and assurances, that Providence is yet gracious unto Zion, that it will turn away the captivity of Jacob.

Our glorious reformers when they broke through the fetters of superstition, effected more than could be expected from an age so darkened. But they left much to be done by their posterity. They lopped off, indeed, some of the branches of popery, but they left the root and stock when they left us under the domination of human systems and decisions, usurping the infallibility which can be attributed to Revelation alone. They dethroned one usurper only to raise up another: they refused allegiance to the Pope, only to place the civil magistrate in the throne of Christ, vested with authority to enact laws, and inflict penalties in his kingdom. And if we now cast our eyes over the nations of the earth we shall find, that instead of possessing the pure religion of the gospel, they may be divided either into infidels who deny the truth, or politicians who make religion a stalking horse for their ambition, or professors, who walk in the trammels of orthodoxy, and are more attentive to traditions and ordinances of men than to the oracles of truth.

The civil magistrate has everywhere contaminated religion by making it an engine of policy: and freedom of thought and the right of private judgment, in matters of conscience, driven from every other corner of the earth, direct their course to this happy country as their last asylum. Let us cherish the noble guests, and shelter them under the wings of an universal toleration. Be this the seat of unbounded religious freedom. She will bring with her in her train, industry, wisdom, and commerce. She thrives most when left to shoot forth in her natural luxuriance, and asks from human policy, only not to be checked in her growth by artificial encouragements.

Thus by the beneficence of Providence, we shall behold our empire arising, founded on justice and the voluntary consent of the people, and giving full scope to the exercise of those faculties and rights which most ennoble our species. Besides the advantages of liberty and the most equal constitution, heaven has given us a country with every variety of climate and soil, pouring forth in abundance whatever is necessary for the support, comfort, and strength of a nation. Within our own borders we possess all the means of sustenance, defence, and commerce; at the same time, these advantages are so distributed among the different States of this continent, as if nature had in view to proclaim to us – Be united among yourselves, and you will want nothing from the rest of the world.

…If there is any man so base or so weak as to prefer a dependence on Great Britain to the dignity and happiness of living a member of a free and independent nation – let me tell him that necessity now demands what the generous principle of patriotism should have dictated.

We have now no other alternative than independence, or the most ignominious and galling servitude. The legions of our enemies thicken on our plains; desolation and death mark their bloody career; whilst the mangled corpses of our countrymen seem to cry out to us as a voice from heaven – “Will you permit our posterity to groan under the galling chains of our murderers? Has our blood been expended in vain? Is the only reward which our constancy, till death, has obtained for our country, that it should be sunk into a deeper and more ignominious vassalage? Recollect who are the men that demand your submission; to whose decrees you are invited to pay obedience! Men who, unmindful of their relation to you as brethren, of your long implicit submission to their laws; of the sacrifice which you and your forefathers made of your natural advantages for commerce to their avarice – formed a deliberate plan to wrest from you the small pittance of property which they had permitted you to acquire. Remember that the men who wish to rule over you, are they who, in pursuit of this plan of despotism, annulled the sacred contracts which had been made with your ancestors: conveyed into your cities a mercenary soldiery to compel you to submission by insult and murder – who called your patience, cowardice; your piety, hypocrisy.”

Countrymen! the men who now invite you to surrender your rights into their hands, are the men who have let loose the merciless savages to riot in the blood of their brethren – who have dared to establish popery triumphant in our land – who have taught treachery to your slaves, and courted them to assassinate your wives and children.

These are the men to whom we are exhorted to sacrifice the blessings which Providence holds out to us – the happiness, the dignity of uncontrolled freedom and independence.

Let not your generous indignation be directed against any among us, who may advise so absurd and maddening a measure. Their number is but few and daily decreases; and the spirit which can render them patient of slavery will render them contemptible enemies.

Our Union is now complete; our constitution composed, established, and approved. You are now the guardians of your own liberties. We may justly address you, as the Decemviri did the Romans, and say – “Nothing that we propose can pass into a law without your consent. Be yourselves, O Americans, the authors of those laws on which your happiness depends.”

You have now in the field armies sufficient to repel the whole force of your enemies, and their base and mercenary auxiliaries. The hearts of your soldiers beat high with the spirit of freedom – they are animated with the justice of their cause, and while they grasp their swords, can look up to heaven for assistance. Your adversaries are composed of wretches who laugh at the rights of humanity, who turn religion into derision, and would, for higher wages, direct their swords against their leaders or their country. Go on, then, in your generous enterprise, with gratitude to heaven, for past success, and confidence of it in the future. For my own part, I ask no greater blessing than to share with you the common danger and common glory. If I have a wish dearer to my soul, than that my ashes may be mingled with those of a Warren and Montgomery – it is – that these American States may never cease to be free and independent!”

1. INSTRUCTIONS OF HE TOWN OF BOSTON TO ITS REPRE SENTATIVES T N THE GENERAL COURT. MAY, 1764., The Writings of Samuel Adams Volume I, Page 1