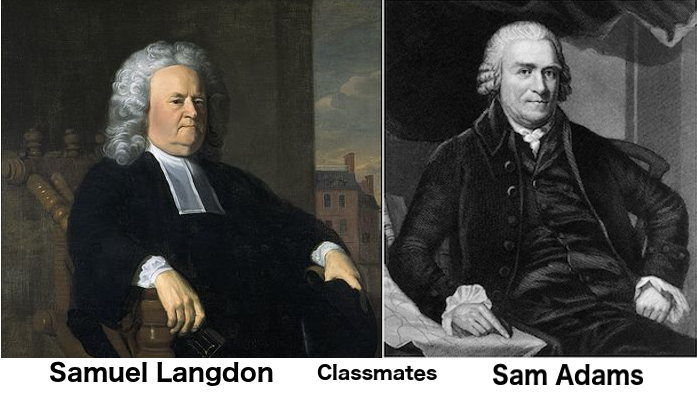 Samuel Langdon’s sermon Government Corrupted By Vice should be preached this very week. Sadly there are but very few in our modern times who have the courage or Orthodox Theology of a Samuel Langdon. Additionally, there is not the political, cultural support of a Johnathan Belcher to encourage such sermons.

No, instead of delivering Government Corrupted By Vice, the likes of leftists denominations in the National Council of Churches and those influential pastors in the Gospel Coalition are intent of accepting the national religion of ‘humanism’. The majority of the pulpits are reminiscent of the Tory pulpits during the Revolution.

Sadly, it is because the educational system, which at one time was guided by solid Biblical Christians, has embraced all that Samuel Langdon and others preached against. So Christians, check out the articles on education in the References below.

On this program, I am highlighting an article on TheFederalist.com web site entitled ‘We Need Christian Nationalism Because Religious Neutrality Has Failed‘. For forty years I have been discussing the failure of ‘Religious Neutrality’. Now we have distinct so called evangelicals as part of the Gospel Coalition that are indulging in all I discussed and referenced last week to the detriment of the Republic. Very sad!

Samuel Langdon was a Harvard classmate of Sam Adams. They were influenced by the preaching of George Whitefield at Harvard. But for Whitefield to speak at Harvard took the intervention of Governor Blecher. Even at the Foundation of the Nation those who held Orthodox beliefs were blackballed. Yup, even when Langdon became President of Harvard – He was disparaged by students and supporters of Harvard. You will have to read the ‘Editor’s Notes’ to the Langdon Sermon to get the rest of the story.

I will make two quotes from that reference concerning education, especially of pastors, which very much applies to this very day.

Langdon’s statement: “By many the gospel is corrupted into a superficial system of moral philosophy, little better than ancient Platonism”

Whitefield said about the College of William and Mary in Williamsburg: “I rejoiced in seeing such a place in America. It may be of excellent use, if learning Christ be made one end of their studies, and arts and sciences only introduced and pursued as subservient to that. For want of this, most of our English schools and Universities have sunk into mere seminaries of paganism. Young men’s heads are stuffed with heathen mythology, and Christ or Christianity is scarcely so much as named amongst them; so that when they come to be converted, they are obliged to undo what they have been doing for many years. Revive, O Lord, a primitive [early Christian] spirit, and then we may hope for some primitive schools to be erected and encouraged amongst us.”

This quote from Whitefield well explains all the confusion in US modern evangelicalism.

Langdon’s sermon on Government Corruption By Vice is indicative of the Foundation sentiments of the First Great Awakening. The Awakening was a reformation within the Congregations of the Colonies such that True Liberty could be fully understood and that Morals of the Biblical design were the only substance for good government.

2. We Need Christian Nationalism Because Religious Neutrality Has Failed

3. Yes, Schools Are Too Girly For Boys. Here’s How To Fix That

4. My Son’s Freshman Orientation At Virginia Tech Was Full Of Leftist Propaganda