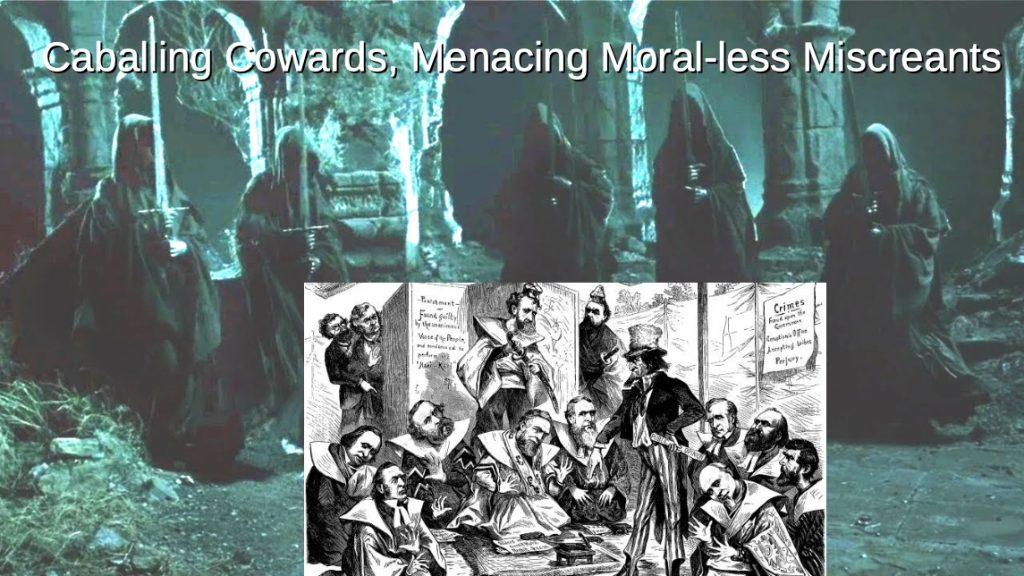 As many of you know, I look at our present through the mirrors of history. Foundationally speaking, we are now a nation of three-hundred million people in fifty States and fourteen territories. Interestingly we were initially a nation of three million in the thirteen Founding States. So the population in the United States is one-hundred time that of 1776 and ‘caballing cowards’ and ‘menacing moral-less miscreants’ are being fully exposed now as they were in the founding era.

The historical words quoted here should be taken in context then and now. The quotes and the principles stated in them are applicable at every level of governance across these United States. I will make my emphasis in the historical quotes with bold italics. I make no apologies for the length of this article.

So before I get to the Ohio Republican Party (ORP) State Central Committee, the Ohio Governor and Lt. Governor, the Secretary of State and the Ohio Legislative and Judicial branches; well OK, all the bureaucrats and all lesser political elements in Ohio alone; let me make a quick mention of a large number of the pulpits in Ohio and across the nation. I want to be clear that my admonishment is to not all pulpits but most, if not the majority, which fall into the realm of not having knowledge of or understanding of foundational Biblical truth or history (see – Barna: “Pastor’s Losing Credibility”). With this lack of credibility, the people in the majority of churches, as well as the politicians or bureaucrats that attend, are destroyed. Hosea 4:6 ‘My people are destroyed for lack of knowledge: because thou hast rejected knowledge, I will also reject thee, that thou shalt be no priest to me: seeing thou hast forgotten the law of thy God, I will also forget thy children.’ END_OF_DOCUMENT_TOKEN_TO_BE_REPLACED

I am spending the first segment on the Ohio Governor Primary. I believe it is critical to understand that the swamp is everywhere to which we must take a critical eye to understanding the candidates. I have a link to my preferred and recommended Gubernatorial candidate in the References below.

I make a quick mention of the Societal Sphere of Sovereignty since the churches and mostly those with any hint of Reformed aren’t expressing sufficiently the full extensibility of the True Gospel. As you know, I consider the condition the nation is in the primary fault of bad theology and broad teaching of the Principles into society – More for a different venue and video.

In the majority of the program I am getting to the Constitutional responsibility of the President and Congress to protect us from invasion, which includes illegals crossing the borders. I also take you into the US Code that allows the President to call on the National Guard for this purpose.

Lastly, as I have mentioned, My new book is available and I will be promoting it during this month as we look to launching the Seminars once again in June.