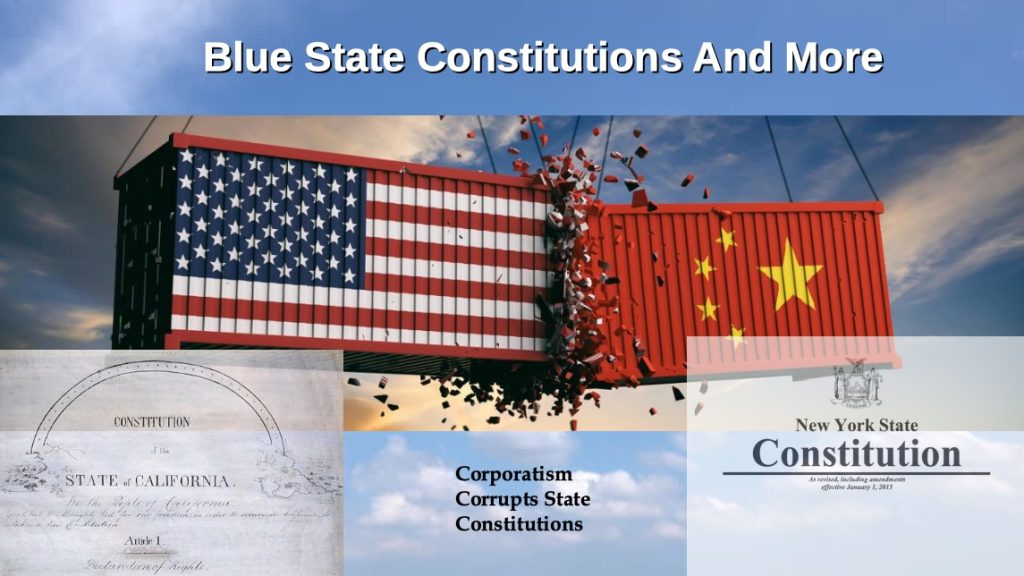 I know that it is hard to believe that States like California and New York actually have ‘State Constitutions.’ One would think that they are just extensions of the federal government bureaucracies and the D.C. Swamp. Well, in a Hamiltonian way they have become that consolidated, assimilated region of the Federal Government.

Believe it or not, the State Constitutions of California and New York have a Bill of Rights as their ‘first’ article. This is significant. Not only that, but the number of sections in theses constitutions is telling about what the Citizens of those states can claim.

Californians have the capacity to reform their state on the basis of Article I. New York not so much. I discuss this in the first segment.

My focus for this weeks program is only on two of the Blue States, it is clear by all the policies that California and New York have done away with any Article I, their Bill of Rights, Citizen authority from their State Constitutions. The only thing remaining operational in those ‘covenants’ with the people are the processes of government. But that is another discussion for another day.

What is clear by the definitions from Last Weeks Program, is that local, national and global corporatism is the mechanisms of governing in these two Blue States.

The challenge to all in those state is to read, learn and act according to their Article I: Bill of Rights from their State Constitution.

While writing my book ‘From Covenant To The Present Constitution,’ I did a lot, and I mean a lot of study on covenant and contract. I attest that constitutions are in every sense of foundational and historical record, a covenant.

With that said, as I note on the podcast/vblog, Dr. Rushdoony, who many of you out there don’t like, does hit this one out of the part and right between your eyes into your thinking. Consider the following from; Introduction to the Law:

‘Before we begin our study of biblical law, however, it is important to recognize certain general facts concerning law. First of all, law in every culture, in every civilization is religious in origin. There is no place in the world where we can go where we can find law that is not religious. Law reflects what men believe to be is basically right and wrong in a society. It reflects the ideas of culture, of justice, of ultimacy.

Third, it follows from this that any change of law, any change of law that affects the basic law structure of society is a change of religion, and this is exactly what we have been undergoing for the past generation or more in this country, a change of religion, and very steadily, our law system has been changed in order to provide us with another religion while we are assured that there is total toleration for all religions, but humanism is now the religion and provides the law system of our American society as it does of virtually every country in the world.

Fourth, it follows from this that there can be no disestablishment of religion in any society. You can disestablish a church, but you cannot disestablish religion. A society must either have the Christian religion established, or it will have a humanistic religion, or Buddhism, or Mohammedenism, or something else, because it must have a basic faith to provide the concept of justice, the moral code, the law system for that society. The attacks you find today in our courts on capital punishment, on restitution, on the idea that the criminal is guilty, or that the alcoholic is guilty, all these constitute an attack upon the biblical law system, and the biblical law system is being disestablished, together with Christianity, as the religion and law basis of American society as well as English, Canadian, French, German, all Western society.

Fifth, it follows from this that there can be no toleration in any law system for another religion. You can tolerate various churches of a particular religion, various interpretations, but you cannot tolerate another religion, because then you are saying that you are tolerating total revolution. You are tolerating the overthrow of your law system, of your political order, of everything. By tolerating humanism, this is exactly what we have done. Humanism is, at present, in the mopping up stages of its revolution against Christianity.’

One of the ‘And More’ for this weeks program are the points I discuss regarding the High-school girl arrested for not wearing a muzzle, I mean a mask, in class. So hold on to your hats Cowboys and Cowgirls because I discuss the Wyoming Constitution Article I: Bill of Rights and I don’t want you all to go packing up and moving to Wyoming after hearing what I have to say. Remember, repudican Liz Cheney represents the state, for now.

The Next ‘And More’, I go to my non-pulpit platform to once again bring the Truth that really matters not just the political historical mirrors of history. This is that the majority of Evangelicals over the last 80+ years have allowed the Country to fall into the hands of the enemy. Now the enemy begins in the spiritual realm but it is active in the world we live in. I’m asking you to watch this sermon; ‘A Christian Response To Mandatory Cookies’ by…. Not Doug Wilson… but by Jeff Durban. You’ll get a kick out of the Truth Jeff speaks since he was a World Champion martial artist with 5 Black-Belts.

Lastly in the ‘And More’ is the lightening round which covers: CA destruction of Article I ‘ private property,’ Crushing Suburban America – Also see – The Impact of SB 9 & 10 on California’s Single-Family Home; ‘the Beast’ in the EU, specially Lithuania; Poland’s POLEXIT; the Logistics backup issues (see References below) and a quick word at the end from Thomas Jefferson replying to articles written by Spencer Roane.

For the newsletter, I am going to continue to hammer it home that the Pulpits and church leadership teams need to get some gonads.. I’m keeping this simple and reminding you of Madison and John Adams similar statement that ‘This Constitution is ONLY for a moral and religious people.’ We are not getting a moral and virtuous people that understand that Jesus is King and has ALL, read it fully, ALL Authority in Heaven AND On Earth.

Get the Reformation in the churches back to our Founders understanding of ‘Applied Reformation Truth and Principles,’ then Constitutionalism will be able to get back on course. Enough on that for now.

Ok, Now ‘Theology Among the Deplorables’ Listen and read here or watch here. I double dare you to do either.

Not a Blue State Constitution:

1. Essays on the Constitution of the United States, Starting at Page 379, A Plain Dealer. By Spencer Roane. The Virginia Independent Chronicle, (Number 82) WEDNESDAY, FEBRUARY 13, 1788.

‘The battle between Jefferson and Hamilton, however, is of very great significance, and precisely because it represented a clash between two fundamentally contrasting systems of political principle. ‘

A play on word in that the transportation and supply line mechanisms are now a ‘chain’ choking America.

2. Big rigs with older engines will be denied registration in California by the year 2020

5. California ports aren’t the only ones facing record backlogs of cargo ships — 3 other US ports have hit historic highs

Comments Off on Episode 322: Blue State Constitutions And More

Blood of Patriots and Tyrants 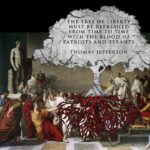 Many are quick to regurgitate Thomas Jefferson’s written statement,

‘the tree of liberty must be refreshed from time to time with the blood of patriots & tyrants.’

But few are willing to look to the context of a full paragraph in a letter to William Stephens Smith in November 1787. The context is that Jefferson is in France. The new Constitution has been sent to the States for ratification. Jefferson observes that ‘There are very good articles in it: and very bad. I do not know which preponderate (definition: be greater in number, influence, or importance).’ END_OF_DOCUMENT_TOKEN_TO_BE_REPLACED 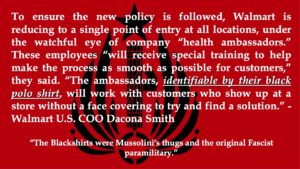 No different than the globalists minded and billionaire Davos creeps drive policy there immediately emerged after the Constitution was in place for under ten years – the “Anglo-Monarchio-Aristocratic Party.” In Reality….. They have not gone away and have been accomplishing their Economic Cabals Forcing Policy for 223 years. END_OF_DOCUMENT_TOKEN_TO_BE_REPLACED

This Samuel Adams article is slightly modified to bring it up to date. The 21st Century words are in italics. I could only add minimally to the great wisdom of Samuel Adams as he addresses the businesses of his day and for that matter, the globalists corporate greed of our present age.

In the 20th and now 21st Centuries, there is no solid agreement from merchants to with hold importations from China or other nations that would decimate our US businesses and economy. Where As at the time of this original, The agreement of the Merchants of this distressed and insulted continent, to with hold importations from Great Britain, it seems to be allowed on all sides, has the strongest tendency towards the repeal of the acts of parliament for raising a revenue in America without our consent. There to is that the major businesses and political elite are opposers of the intent to withdraw from treaties favoring other nations for their own profit. It is no wonder then, that it was oppos’d with so much vehemence at first, by the Cabal; who knew full well, that their Places and their Pensions, and all the delectable profits which they expected to reap, and are now actually reaping, at the expence of the people in town and country, would entirely cease, if these acts, by the means of which their places, pensions and profits arise should be repealed—When they could no longer with any face call it the last efforts of a dying faction, (for the measure was so rational and pacific, that it soon spread far and wide, and was chearfully adopted by all disinterested friends of the country thro’-out the continent) they put on the appearance of the Sons of Liberty; and now their cry is, Where is that Liberty so much boasted of and contended for? END_OF_DOCUMENT_TOKEN_TO_BE_REPLACED

Comments Off on 250 Years of Mercantile Madness