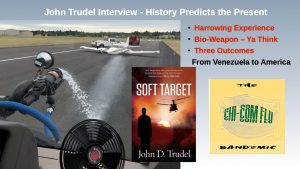 This week I interview Author, scientist and technologist John Trudel to discuss how History Predicts the Present. We have a real fun time recounting a harrowing experience while flying back from a book signing.

We are also catching up on how writing fiction has its place in following history can predict the present by expressing what is known from technology, sociology, psychology and religion.

END_OF_DOCUMENT_TOKEN_TO_BE_REPLACED

Yes, we are in a Civil War! The Present Civil War is not friend and family picking up arms and dividing along some imaginary Mason-Dixon squiggle across the face of the United States. The Real Present Civil War is engaged via Cyber-techno Oligarchs who pit ideologies against each other intent on destroying our Constitutional Republic.

My returning guest – Scientist, Inventor, Author and Friend – John Trudel, will be discussing his insights into this topic and what is happening with his up and coming book. John is the Author of techno-thrillers that have a tendency to be predictive. We will discuss what this is.

What really brought my interest in having John back is the News Letter that he sent on May 22 titled: A dangerous new type of Civil War. A pdf of this will be on my archive page for this program at samueladamsreturns.net. John reprinted the “Civil War, by The Late Dr. Jack Minzey”, which we will elaborate on during the program. END_OF_DOCUMENT_TOKEN_TO_BE_REPLACED

Is it ‘Culture War’ or ‘Civil War’? It is the Anti-federalists Prediction – Present Civil War! According to the establishment of each independent State which is guaranteed a free Republic form of governance, the Present Civil War is not just between clashing cultures – it is between sovereign States and the despotism of the National government.

The Present Civil War really started when Lucifer attempted to ascend to the throne of God. The actions of this entity are fully exhibited in the lust for control and power to dominate not only individuals and societies but the whole of creation.

Thankfully we know that the in the greater scheme of it all, the war is won! Yet those who are party to the victory do not act as winners.

So too, the Anti-federalists understood that the Constitution of 1787 would result in the lust for control and power as we are seeing it today. In a very long chain of connect-the-dots, they even predicted the election of Donald Trump. END_OF_DOCUMENT_TOKEN_TO_BE_REPLACED