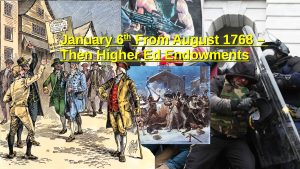 Bottom line is that reflecting on January 6th from August 1768 is a look at the lack of morality and virtue having been instilled at the pulpits ‘plus,’ as Sam puts it, END_OF_DOCUMENT_TOKEN_TO_BE_REPLACED

Episode 364: Ohio Higher Ed Funding Constitutionally Protected – So Too in Other States 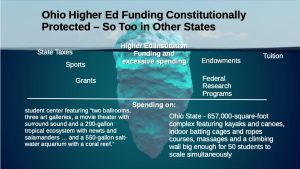 a number of other States Higher Education are Constitutionally protected. This is the power of the college/university lobby.

I started an investigation on the funding of Ohio State University back in November of last year. I can only say that in general, the information is overwhelming when it comes to the complexity of funding Higher Education. I suggest you go back to these two programs to get more of where I was beginning: Episode 325: Corporatocracy: Universities Making Vassals and Universities are Body Politic and Corporations.

Tip of the Iceberg on Ohio Higher Ed Funding

END_OF_DOCUMENT_TOKEN_TO_BE_REPLACED

Comments Off on Episode 364: Ohio Higher Ed Funding Constitutionally Protected – So Too in Other States

Universities are Body Politic and Corporations

Universities are Body Politic and Corporations 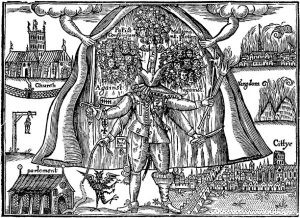 Did you know that in Ohio, universities are ‘a body politic and corporate?’ Oh yes, they are.

This is a quick introduction to how the Higher Education Lobby is NOT for education and NOT for the Ohio Constitutional intent for a better Citizenry. The Ohio university and college system is for their Corporatists’ interest only. The Ohio Constitution does not grant them to be ‘a body politic and corporate’ but in 2009 the Ohio Legislature created entities that now can even force your children to take the ChiComFlu VAX.

You might ask, what funny stuff am I smoking? The real question should be to the Legislature and why they were bought off by the corporations and federal entities funding higher education who are mixed in with the lobbyists of the universities and college system? END_OF_DOCUMENT_TOKEN_TO_BE_REPLACED

Comments Off on Universities are Body Politic and Corporations

This week I find myself looking at: what is Prudence in Governance? I am addressing this from the hoopla that has not only occurred in Ohio but also across the Nation. The May 1764 Letter of Instruction is critical for all to read. Follow the link in the last sentence or in the References below.

This Letter of Instruction is so relevant to this very moment in time that it is uncanny. The situation in Boston is the present issues in the whole United States: Economic issues, Trade impacting local manufacturing and epidemic crushing upon it all.

I will be bold and dare you to read this Letter of Instruction if you have the courage to reflect on history and then apply the lessons to the present.

I implore you to read your State Constitution! END_OF_DOCUMENT_TOKEN_TO_BE_REPLACED 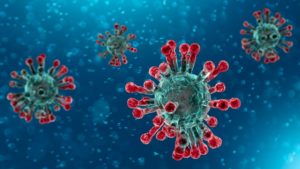