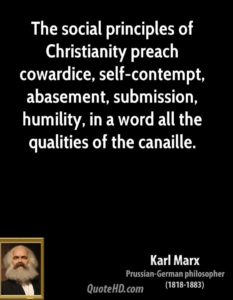 Socialism In The Churches has been a force to deal with since the mid 1800’s. Statistically Christianity is in a decline and therefore morally the nation is following. George Washington and other Founders clearly identified that we must be a moral and virtuous people to have good governance. The downturn is apparent due to the reality of the philosophical shift that occured in the early to mid 1800’s – the churches engaged in the ‘social gospel’ – Not – the ‘extensible’ Reformation Gospel.

The influence of socialism in the churches has opened the door to tolerance which is not a Reformation Principle. The disruption of orthodoxy over the last 100 years resulted in many ideas fostering the main denominations and a number of the 40 mega-churches to not teach the ‘extensibility’ of the Gospel. With 217 modern denominations or non-denominations, what is the core theology that permeates the beliefs of individuals? Going from two predominant denominations at the beginning of the Colonies to these 217 is a significant shift as to why then even the ideas of civil governance have been thought of. END_OF_DOCUMENT_TOKEN_TO_BE_REPLACED

When did you have that first conversation about work ethics that dove into the plight of the common worker and those terrible rich business owners? Mine was as a young lad sitting on the periphery as my father, his two brothers and a couple of friends sat around playing poker. It was in the early 60’s when the height of the labor vs. management was raging through much of the industries and trades in the United States. The conversations at the card table could become pretty heated since there was an uneven split between the players of corporate/management types (two) and labor/union types (three).

My dad and his oldest brother were of the latter category while the younger brother of the former. Things could get heated as they evaluated the political as well as the monetary discrepancies of rich compared to the middle class. The poor were never a consideration in the conversations, ah, sometimes arguments. I always listened intently because I saw that on the one hand, emotionalism sustained the argument of the majority over the other hand, rational-factual retorts of the minority players at the table. What was the real basis of what was happening and when did the deeper conversation about this with Dad play out? END_OF_DOCUMENT_TOKEN_TO_BE_REPLACED

Comments Off on Business Ethics and Dr. Abraham Kuyper

Last week was fantastic watching CPAC!
The content was more on target with what I like to hear – that being our grounding is on Constitutionalism. Regarding Constitutionalism, in the 2nd and 3rd segments I intend to discuss why my book “Not ALL Conservatives Are Constitutionalists” is even more relevant as we move from CPAC into Action.
I am going to do some frothing in the 1st segment today. Once again the progressive/socialist/Marxist pastors are promoting lawlessness. I continue to hope that the Evangelical pastors will become stronger to stand up for truth as those during the Revolution period did. END_OF_DOCUMENT_TOKEN_TO_BE_REPLACED