Video of Election Redirection Via Redistricting at Rumble or YouTube

Quit trying to analyze the 2022 midterm election as candidate mishaps, 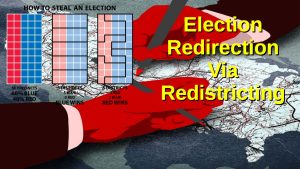 party tomfoolery or fraud. This mid-term debacle was a result of election redirection via redistricting. In fact, so was the 2020 election. I discovered the insidiousness of this fact as I was researching the Ohio Constitution Article XI: Apportionment, for the class I teach.

Wow, I hit the Mega-jackpot, wish it was the billion that was recently claimed, but this is bigger. While all the political heads are high on who knows what, these election results were strategically planned beginning in 2010 and fully implemented in 2014 with their shining ‘dark star’ (Newtonian Mechanics) making major moves in 2018. With law suits and state constitutional initiatives, the key ‘in play’ states were targeted. Many of the targeted states resulted in the strategic outcomes as intended by the implemented redistricting efforts.

Does that heading sound confusing? Well you should read through the Ohio Constitution Amendment of 2018 and your confusion will be, confused. The 2018 Amendment to Article XI of the Ohio Constitution was the work of a specific group that I talk about. Not only was Ohio on the target list but so was: Colorado, Florida, Georgia, Michigan, Minnesota, Nevada, North Carolina, Pennsylvania, Texas, Virginia, and Wisconsin. See any patterns here?

END_OF_DOCUMENT_TOKEN_TO_BE_REPLACED

Comments Off on Episode 374: Election Redirection Via Redistricting 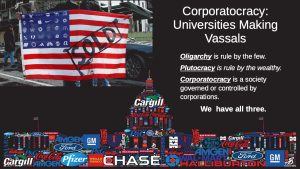 With this, I pray that where the wins for the repudican party are; The Citizens that were elected govern Constitutionally and not by party spirit. Hopefully the distribution of ‘Red Pills’ will continue with a devastating effect on the Matrix but we shall see as the next lines are formed for not just another skirmish but a major counter assault by revived moral constitutionalism. END_OF_DOCUMENT_TOKEN_TO_BE_REPLACED 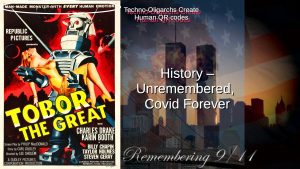 9-11 Forgotten is not a saga if you are over 30. It is a reality that the Pew Report in the References quantifies. The root cause of Afghanistan Forgotten is only for those over 50. With the present educational system History Unremembered is the now and future. More importantly for the observing, COVID is Forever.

That which is Forgotten is not only the event of the time but all the emotion that is tied to it. I discuss the NPR article about children of 9-11 parents. What is a lasting debacle of 9-11 Forgotten are all the after effects in the social and political arenas that have the greatest far reaching consequences. The tragic event on 9-11 is an unsettling for Constitutionalism, Faith and Individuals. The political decisions of the time has given those who capitalize on tragedy decades of social, cultural, political and yes spiritual leverage over the Citizenry who do not understand how government should function.

These elite planners and techno-oligarchs have reshaped the United States at the Federal level and are working tirelessly on doing the same in every sovereign State. It is imperative to go through this history and what to do next.

What have you Forgotten or worse, been molded to Un-remember? END_OF_DOCUMENT_TOKEN_TO_BE_REPLACED 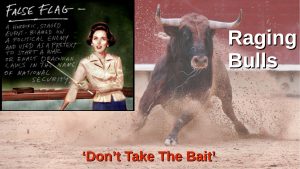 False Flags and Raging Bulls are at every turn in the political and ecclesiastical road. With all the false media, government claims of insurrection and pundits yelping all over the air waves and digital platforms, I’m reminded of the Spanish bull bloody and weak from banderillas snorting with fierceness in the eyes but slow to respond to the reality before it. False Flags are the banderillas that the afore-mentioned piercing deep into the psyche of many Evangelicals and unwitting so called ‘patriots.’

With shoulders bleeding by over-burdened media noise, government mandates and wokeness everywhere, Patriots who are reactionary become the Raging Bulls weakened for the slaughter. How can this be stopped many have asked me?

Just a quick note: Look around and you will see people going crazy again by buying the shelves bare at the stores…. Why? And the stores cannot resupply… Why?

Comments Off on Episode 316: False Flags and Raging Bulls