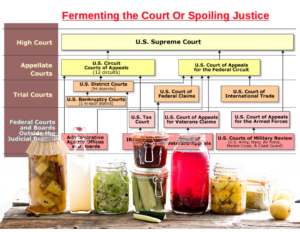 Brutus has much predict that the last 100 years have so well proven to the Poisoning of Justice by the bad bacteria which has been Fermenting the Court into our present Federal system. I use the allegory of fermenting in this program. Considering that Fermenting has been a means of preservation for eons, this only works well if the ingredients are good. END_OF_DOCUMENT_TOKEN_TO_BE_REPLACED

A short introduction and synopsis of Calvin regarding biblical government. Calvin argued that the office of the magistrate was “a most sacred office,” a noble profession worthy of any Christian’s respect. Magistrates were “the viceregents of God,” said Calvin, established by his authority and accountable to him for their actions. Even tyranny was preferable to anarchy, and only where the tyrant contradicted the commands of God was peaceful resistance warranted. [Institutes Book IV Chapter 20] According to Calvin, government had a divinely-instituted purpose: to protect the public order and defend God’s moral law. When it came to the question of how best to order the state, Calvin offered an opinion: a mix of republicanism and aristocracy. I have no capacity in this short order to get to all that can be discussed back and forth as to all that Calvin proposes and even rejects in this chapter. But for me, the bottom line is that we now have a Constitutional Republic and that is what must be supported and kept in good order for good government. Yes and Christians have a responsibility in doing so.

In the last two segments I again do not have time to fully contrast what Hamilton writes in the referenced Federalists Papers nor do I get into the details of Yates writing as Brutus which predicts our present Judicial system breakdown. The Courts have in every essence fulfilled all that Hamilton indicated would be their jurisdictional authority… and then some. With this short time we have, I am taking you through only a couple high level points of Hamilton’s approval of the structure and intent of Article III that has more than exceeded any perspective of his simplicity in argument for the supremacy of the Court.

END_OF_DOCUMENT_TOKEN_TO_BE_REPLACED

This is a fantastic interview with Dave Welty, the author of “Unfaithful Guardians”. Dave has written a fantastic walk through history culminating in what flipped with the Judicial system and Supreme Court. His clear understanding of the 14th Amendment is deeply researched as to the Original Intent established by the 39th Congress and the State Ratifying Conventions of the Day.

Comments Off on 5-19-18 Unfaithful Guardians, Interview with Author Dave Welty