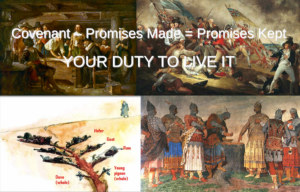 What is Covenant? The very concept of Covenant is not a part of our language, not even in Christian circles. This theological concept was in fact a core component of what was understood in our Founders era. Yes, The interactive relationship between individuals, society and individuals as well as the first Covenant of the inner determination of God in three persons to establish salvation were Founders premises for governance.

The American Founders looked at the Reformation context for the definition of Covenant. Here is a simple definition:

“The term “covenant” is of Latin origin (con venire), meaning a coming together. It presupposes two or more parties who come together to make a contract, agreeing on promises, stipulations, privileges, and responsibilities. 1”

In this program, I am covering the use of Covenant in Foundational writings including the Constitution of Massachusetts, writings about Sam Adams, letters or documents written to or by Sam Adams and a perspective from John Witherspoon in his work “Lectures On Moral Society.” END_OF_DOCUMENT_TOKEN_TO_BE_REPLACED

Comments Off on 8-29-20 Covenant “Promises Made = Promises Kept”

I would ask you to take a look at the previous NewsLetter regarding the “2019 Review” that I sent out on New Year Eve. In this program I will detail the statistics and bring home the value of the key areas that listeners were interested in.

As a quick point of interest, the topic of ‘moral governance’ is a most compelling area that the general citizenry does not comprehend. With the philosophy of ‘post-modernism’ flooding everything including the churches, who would expect comprehension of the basic let alone complex ideas like ‘governing’?

END_OF_DOCUMENT_TOKEN_TO_BE_REPLACED

If it were not for the Evangelical Failure in the pulpits, education and family this case would not have even come to a trial. Thankfully, the presiding judge had the moral instance to allow the Father to have joint custody and medical decision making authority. Thus overriding the Jury decision. END_OF_DOCUMENT_TOKEN_TO_BE_REPLACED

The fact and reality is: That Christians in the these United States are to be full Participants, Actively, in governing. Sam Adams exemplifies this in his penning of the “INSTRUCTIONS OF HE TOWN OF BOSTON TO ITS REPRESENTATIVES IN THE GENERAL COURT. MAY, 1764”, which according to the Colonial Charters set up participatory self-rule for the citizenry. Not only is it necessary to participate in self-governance but it is fact that a community, a county, a State and Nation can legislate morality. If they do not then the citizenry allows immorality to become the law to the detriment of the general community.

Now, This ‘Instruction’ addressed the despotism coming from the mother country and required responses via the ‘Lesser Magistrates’ elected by the people, most of whom were in fact Christians, to address the issues at had to the national government and the King. Those issues being Morality, Religious Liberty, Commerce and Manufacturing.

Since Sam Adams studied John Knox, Calvin and the other Reformers – He knew that the process of redress through the elected is proper even mandatory in a ‘Representative’ form of governance. Adams clearly addresses the ‘English Constitutionality’ of the people as sovereigns and the Reformation Principle of ‘Appealing’ to the ‘Lesser Magistrates’ to further the Liberty and happiness of the general public.

It is beyond comprehension and an absolute misrepresentation of Biblical Reformation and Colonial Principles for pastors, priest and rabbi’s to tell their congregations that they should ‘not be involved’, ‘fully submit to the government authority’, and ‘pay your taxes without complaint’. When tyranny and despotism are obvious and those elected are not acting as the agents of the Moral Sovereign of the Universe – Then is in this Constitutional Republic the absolute right and responsibility to call for redress and actively act against tyranny and despotism.

We have so much more to learn from our Founders and their original intent for good governance which is based on Reformation Biblical Principles.

The school shooting in Florida continues to drive the emotional intolerance of everything that is related to sensible governance as intended by the Framers of the Constitution and the Bill of Rights. Worse, the local and state political machines are acting against those that desire to represent the citizenry from a position of core beliefs that are at least Conservative minded and to that which they know, Constitutionally minded. Education has become what Khrushchev predicted and is even under further attack in Ohio from the Governor himself.

On the program this week I am giving a brief on what party leadership can do to subvert the citizenry for the purposes of control and power. I dig into the simple reality that the core issue in education and the tragedies happening with young folks are rooted in taking the basis for morality out of the classroom!

I then take us into an in-depth look and the historical reasoning and debates on the 2nd Amendment. We get to the factual reality of what it means for the Citizenry!

Comments Off on 2-24-18 Education and The 2nd Amendment

How Dare I say this? Simple, I know how to read and reading the Federalist Papers alone gives clear intention (Intent) for how governance should function in the Republic. So before we get to the core issues as indicated by the title let us get one thing very clear: every pundit, talk show host/hostess, politician or bureaucrat that calls this nation a democracy should be heavily chastised, have their ears rung and be thrown out the door for manifesting their ignorance or subversive ideologies. Why? Because we are a Constitutional Republic (period)! If you cannot get that correct then you have no capacity to understand how this nation should function! END_OF_DOCUMENT_TOKEN_TO_BE_REPLACED

All Over Map, The Senate and Call to Action

This week I’m a bit all over the map since there is so much going on. Yet, the focus has to be on understanding the Senate! Just a reminder that the Anti-federalists predicted what is going on at this time. Look up again the definition of ‘cabal’.

We have to be people of action. We have to stop whining and yapping on social media! Instead let’s use it as the tools to drive our elected at all levels to:

Review this from a couple of weeks ago and get these solutions on the ‘To Do List’ for active involvement.

Comments Off on 9-2-17 All Over Map, The Senate and Call to Action

8-19-17 From Kozak to the Pulpits of the Revolution

From Kozak to the Pulpits of the Revolution

What we continue to see this week on the streets, from the political class, intelligentsia and the sophistry media is the Kozak Plan executed (archives about this here). It is absolutely clear that they have every desire to be and do all things against Constitutionalism and the Republic.

Critical in this is the fact that they are moral degenerates as defined by the Pulpits of the Revolution. Sadly, the modern Pulpits and education system have devolved from what #FoundersOriginalIntent is for the nation and the Citizenry. It is clear that morality outside of the Judeo-Christian worldview is not the morality expected by the Founders for self-governance and then governing of We The People.

see more to get the solutions & references and watch the program:

END_OF_DOCUMENT_TOKEN_TO_BE_REPLACED

7-15-17 Video Too and Melancton Smith – Bribed With Your Own Money?

Video Too and Melancton Smith – Bribed With Your Own Money?

Listen Saturday’s at 9 AM and 7 PM Eastern on www.lwrn.net

Expanding the horizons of technology! We are experimenting with recording the program on video as well and then putting the segments up on the SamuelAdamsReturns Youtube channel.

Melancton Smith Posed the questions: “How, say they, are the people to be corrupted? By their own money?” De Tocqueville stated that: “The American Republic will endure until the day Congress discovers that it can bribe the public with the public’s money.” We have had this happening now for 100 years. Hence – we no longer have a Republic but as ‘constitutional socialist democracy’ in the fantasy cover of a Constitutional Republic. Gee I wonder why the deep state and left hate Trump and all who call for our Founders Original Intent! END_OF_DOCUMENT_TOKEN_TO_BE_REPLACED

Comments Off on 7-15-17 Video Too and Melancton Smith – Bribed With Your Own Money?

Generation Z – What do you know about them? This large group of citizens, 70 million strong, is emerging onto the scene with gusto. What are the worldviews of these individuals that are half still in high school and the other half in college or the work force? How are they different from Millennials in the views on economics, politics and religion?

Gen Z or known as the iGen for their ease of life in the digital world are affecting marketing and policy making now and into the next eighty years.

With that, I will be hammering it home to your remembrance that “People are Policy” and we need to develop Gen Z into policy-makers with Foundational Principles and Ethics. It is ever so critical to do this. END_OF_DOCUMENT_TOKEN_TO_BE_REPLACED